A visit to Sue's summer garden

Unlike the vigorous and vibrant color of floras in our tropic regions, their flowering siblings in the temperate regions only share this colorful and invigorating nature when spring and summer come. This was the only time when I can feel and see everything come into live. Apart from my disliking to the boring, dull and blistering cold weather of the winter, spring or summer was my favorite time to visit those places for that very obvious reason. Winter for me was something nauseating, like to be forced to listen to meaningless speech by ministers during an opening ceremony of some official events.

When I was asked to be seconded for three months to our sister office in the northern part of London, I purposely chose to go there during the summer time. Even though the prospect of contracting the hay fever was quite inevitable during that time of the year, the urge to experience the lively summer atmosphere was even stronger. who would care about hay fever, as I have experienced a more severe fever like dengue fever before. But for the "mat saleh", hay fever is something unspeakable and if one was unlucky enough to contract this illness, and it was summer, it was quit a pain in their ass, as they have only few sunny days to show off all their body tattooing during their annual sunbathing festival.

That time of the year however, I missed again to visit The Royal Botanic Garden of Kew, of which I have missed on several occasions whenever I visited London. It was not because I was so busy spending my time in the laboratories, but no 'kaki' to go along. Traveling alone can be very boring you know. Probably I should stop supporting Arsenal and switch to support Liverpool instead, as their motto "you'll never walk alone" sounds more interesting . 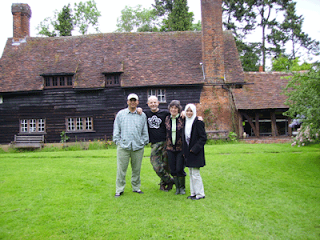 Luckily my quest for a greener adventure was not lost into oblivion after all. Sue and Ian, senior staff to the office, upon hearing my interest, never stop asking me to pay a visit to their house. Their lovely and cosy old-British country house was at the background. Such a good friend and lovely couple. 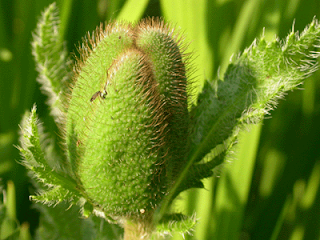 The poppy pod, an early stage before you can start to see the beautiful flower.

The reddish poppy flower (Papaver somniferum) blooming under the bright sun. This plant has done so much proud to me as this plant was one of my subject when I read for my PhD. I was so addicted to this species, I even tried a sandwich bun buttered with poppy seeds. It can tell you it was awesome. 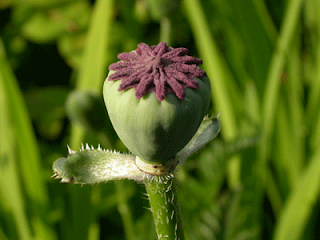 Apart from its ornamental purposes, this very pod also contain specialised latex where opium and many other refined opiates like morphine and codeine get their narcotic popularity.

Another beautiful plants that has somehow missed my vocabulary. 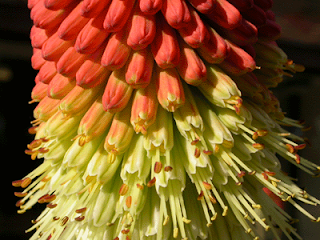 A close-up photo of the above plants. This photo (similar to the one I have taken during my earlier visit) has bagged me a third prize in a photography competition run by our local newspaper not so long ago. I got a free camera for this effort. 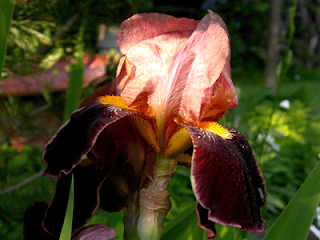 Another shot of another no-name flower. Just love the subtle lighting on certain part of the flower.

I like taking photo close to the ground. With my first digital camera , A Nikon coolpix swivel feature, it was easy to snatch a photo like this. It was however, quite difficult for my old trusty 35mm camera to do this acrobatic action. Somehow, I am still quite attached to my EOS 5. 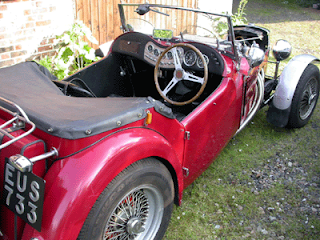 Ian's classic MG. He also owned and kept several classic vehicles ranging from motorbikes to cars and tractors. As an avid classic vehicle collectors, he refurbished all the vehicles from scratches by himself. I would love to have one of this, but with limited knowledge in mechanical parts, maintaining this classics will drain my time and wallet. My Ultimate Driving Machine is sufficient to satisfy my car-craze at the moment.
Posted by DrSam at 4:28 PM

FYI, that lovely T fit me very well. and how do you know that I collect caps as well? Anyway, terimakasih daun keladi.

the pictures are awesome. love them all!

i plan to visit europe... paris or venice but during winter the price is damn cheap compared with summer.

hehe need to go to borders and find some sources about both :)

Europe is best visited during the summer time. Of all the European countries, Paris is among the country I missed to set my foot on.

I have some books on traveling to Paris if you want to borrow. Just send me you address.

memang patut jeles. Arsaili is a very nice person and easy to get along with.

will meet this guy again before his departure. Budi baik dikenang jua:)

Airasia is flying to UK soon. So more or our nasi-lemak nation can have a good taste of their fish&chip soon.

salam dr sam...how do i know u collect cap? umm when i saw ur pic with less hair...i can tell...ahaha..joking jer
Dah selamat sampai ke Perth ni...my Indonesian fren pick me up at the airport. Lepas tu terus beli nasi beryani but nothing like batu pahat beryani. Blurrrppp..kekenyangan. Alhamdulilah that T fit u well, takut pendek jer coz tatau lak ur height standard mat salleh! Thanks for d novel too..

Good to hear you have arrived safely in the far land. Now you can cross the road safely (even without the Z-crossing). Did you manage to smuggle your mouth-watering delicacies?

Wish you all the best comrade.