Won the battle but lost to uric acid

It was raining quite heavily that early Sunday morning in my neighbourhood. At 0730 hours, I went to check out the battle ground to see if all the troops were ready as commanded earlier and accordingly to our battle plan. Nope. Not a single soul, except a platoon of event organizer drenching wet under the canopy waiting for the 'family' to show up. At 0900 hours the rain ceased but ominous dark cloud still looming in the sky. I saw a stray dog appeared unceremoniously and pissing casually near the ground as if showing his discontent on the somber mode, while other 'family' members were still deep in their cold weekend slumber.

Thirty minutes later however, out from nowhere the whole battalion started to gallop into the field and all hell broke loose with the battle cry and the air was filled with high spirit and enjoyment .

It was an inaugural occasion for our neighborhood - a family day. It took the clan 8 years to have such a memorable family affair. My whole family came to the battle ground unprepared, as prior to this we actually had another important engagement and we thought we were going to miss this historical gathering. But a simple twist of fate prior to the opening ceremony gave us ample time to join the joyful crowd.

Everything turned out well at last. I met many new faces and get acquaintance with many new 'families'. The crowd was ecstatic. The food was good. I saw many happy and cheerful faces that day. Kudos to the organizing committee who had really done a very good job. That is what I called a neighborhood. A happy one.

However, after nearly two years or missing my intimate 'acquaintance', with a mysterious stranger, I had a surprise visit by my long lost friend later that day. Uric acid accumulation from over-dehydration and over-excitement greet me with a limping gesture. This friend resided for a week in my left toe. Another reminder that age is catching up.

My youngest superhero super-lightning dash left his peers still wetting their pants with excitement listening to lengthy instruction by their parents on how to win the race. 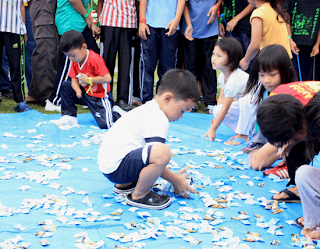 Those sweets littered on a canvas was the kids motivation in this race. Adults have their own rat-race to worry about - the prize are of course bigger and sweater 'sweets' if not bitter for the loser.

Another dash by my third superhero with a ping-pong ball in his mouth to win another game. Years of chewing eraser in his classroom had given some added advantage to him in this kind of sport.

My second superhero looked quite puzzled here as to whether he was putting the right make-up for the event. As this was not a fancy-costume party he didn't get any prize for that. However, he bagged his own prize in a game of 'tiup gula-gula dalam tepung' - a game probably created by the rich when the flour price was at their lowest. 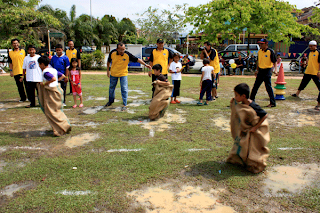 Another classic game in most of the family days -'lari dalam guni'. It is a good exercise for those who don't like to jog or don't have time to jog around the neighborhood - just get into one of these 'guni' and keep humping on the same spot.

Look how cool my youngest superhero riding my back sipping his ice-cream in this 'lari kendong anak". I participated in this kind of activity because I want to test my back after a year of resting from any back-strenuous activities. That was a lame excuse though for being the last.

Thank you to Pak Mat (still could not figure out which one is Pak Mat though - coud be a nom de plume) for being so kind and generous in providing us with breakfast and that yummylicious briyani for lunch.

I spotted this cute little baby 'skodeing' me from his mymmy's cuddle while shooting the event. He could be the youngest participant that day. The organizer should consider this category too in our next gathering. 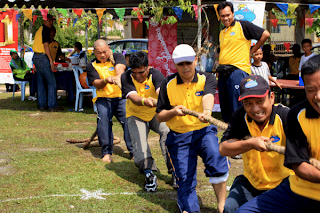 The grand finale - a tug-of-war to test ones muscular strength and wittiness. Out of my excitement and didn't want to let down 'family' request, I forgot that I had a back problem slightly over a year ago and join the rank. 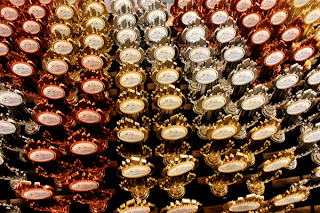 Out of these many trophies, each of my family members took home a souvenir each to put on a shelf. That will be a good memento to cherish upon and remind us that next year hopefully will be another big gathering to meet our big 'family' again in a battle that will strengthen our mutual bonding.
Posted by DrSam at 4:45 PM

sounds like a nice family day. I have always missed out on mine - should suggest that they do it here - where I am, right?

the malaysian community has a family day which they have now called carnival at you know where .this year will be difficult as it is also smack in Ramadhan.

Sounds like fun and the superheroes are still young enough to enjoy and obedient enough to attend. Once they grow up it will not be 'cool' to attend family day or any activities involving adults (particularly their parents. So Dr Sam enjoy them befor they outgrow this kind of things.
Salam.

Kak Teh,
Actually, I've never had the chance to join the gathering at that I-know-where. Ada aje aral. Once my car broke down exactly at Pontefract on the way to that place and had to be towed back to Durham. Other time, the timing was not right for me.

p/s: that place you-know-where is going to have a new CEO soon.

NanaDJ,
Yes you are right. Even now, I found even my second superhero will find sort of excuses to go for a dinner outside for example, just because he did not want to miss his favorite movie at home. But most of the time, they still find most of the family activities are super-cool! That I need to cherish.

Some fun you have! Hopefully your mysterious friend will leave you in peace. Fancy it pays another visit after 2 years.

Anyway, we are planning to spend a break at Rookhope. While there we plan to tour Durham, Sunderland and Newcastle Upon Tyne. Can't wait to visit the Beamish Museum!

Mia's mom,
Salam. This time my mysterious friends stayed a bit longer than usual. I guess both of us being missing each other too much :)

Nothing much to do or visit at New Castle. Just like any other city except derelict buildings. Beamish is a gem, a must visit. Sunderland quite a small town, has a nice quay. Do visit Corning factory - if you are lucky you will get your kitchenwares for only few pennies during the sale. But Durham...splendid! Enjoy the market place, the castle, the shops, the river cruise, the very nice people (Geordie) and you'll see campus life at its best (as it is a town university) (kempen ni :) all in one.

Sounds like a lobbying campaign for me to do my PhD at Durham je! Mahal sangat la Bro! Remember? I am self-funded :-D

I will make sure we will make the best of our visit to Durham! :-D

Mia's mom,
No problem sis. Where there's a will, there's a way. Anyway, just stay put at Dundee. It is a nice place too.

I know that friend called uric acid too... ouch!

Oldstock,
We are in the same boat then :)

You had being the last in "lari kendong anak"? haha..its ok. da most important, participation! :)