By chance I fell in love with this bimmer. It was a E28 520. A superb car inside and out. It got a nice body kit too. I didn't pay much attention to it, until I looked at this photo again when I was back in K.L. It brought me to the most part of Britain without any glitches. I paid 800 pounds and sold it a year later for the same price to another enthusiast. I should have brought her back to KL with me. 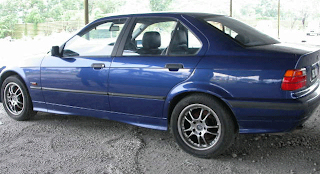 My second love affair continued with this blue beauty. I was introduced to her by one of my business contacts. It was a E36 328. Supposedly a nice sweetheart, but with so much tantrum. Haven been given not much choice, our affair did not last very long. Three months later I divorced her for a better one. 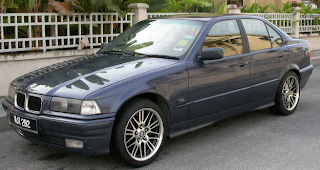 I got acquintance with this beauty shortly after that. She has the same specs and nice curvature with the previous one, but she was a bit special. She was an ex-Datuk's. So a lot of pampering and TLC has been showered into her. Even though she was not a virgin when I first got her, but riding her is so orgasmic. She still gives me the same pleasure until today. I wiill keep her for sure.

After a year of having affair with UDMs, my other-half started to complain. A jealous woman should be handled carefully. So I though, I should be fair to her and I bought her a black stallion, a E34 520. Now my other-half is a very happy woman. I can now spend some time with my sweethearts...and my other-half doesn't mind at all.

Note: UDM = Ultimate Driving Machine
Posted by DrSam at 1:44 AM