Once I was a tiger! 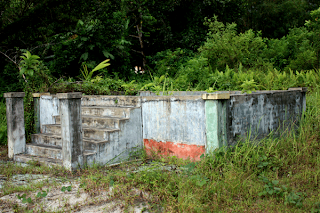 In the pitch of darkness I started to transform myself and invoked all the inner senses in anticipation for any incoming surprises. My black attire blended well with the surrounding. When the timing was right and upon instruction by my master, I started to jump...punched...kicked and then I roared. My other colleagues did the same. Sometimes I punched them and the other time they kicked me back, in retaliation. But most of the time I received more kicks than landing a good punch onto my opponents. The bruises could last for weeks and the scars never healed in my memory.

That was my 'painful' remembrance during my initial year as 'anak Gayong'. The year was 1987 and I just started my new life chapter in the ivory tower surrounded by lifeless concrete jungles. I was hundred miles away from my beloved family for the first time. The year was a restless one for me and puberty hormones was already started to kick in. At that time, my teropong iman was still in its infancy and not well developed to take care of the hormonal imbalance.

I then got myself involved with Pertubuhan Silat Seni Gayong Malaysia (PSSGM) at my first alma mater, UKM. There was no special reason for choosing this martial art practice but merely a gut feeling. There were few other martial art clubs as well, but for me PSSGM somehow made me feel and look cool!

From there, I became a very devoted disciple, unraveling the mystery of Gayong. Rain of shine, there I was with my other anak Gayong in the open field and enclosed building to practise this ancient form of art. One of the reasons why I felt so obliged and dedicated was because of my first Gayong master, Cikgu Selamat. He came twice a week to Bangi all the way from Kelang on his really old kapcai just to make sure we got to learn all the bunga, buah, kunci and other syllabus. Despite many punctured tyres in the Federal highway in the middle of the night, that never become his stumbling block to roar together with us, his faithful disciples. His sheer spirit and utmost devotion really touched me. He later became my inspiration to move on and continue my quest to become an invulnerable.

Year in, year out - masters come and go. the late Cikgu Mat Khir, Pak Ngah and Cikgu Nazri were among the many that came to teach at our gelanggang. Occasionally, we went to visit other gelanggang and met other masters to learn special Gayong moves and tricks. They had their own touch and styles, but still the first one really made a lasting impression. I lost touch with the group after I left my alma mater and the tiger remained tamed inside. But the demon never died.

Last weekend however, I almost awakened the sleeping tiger in me and brought back all the wonderful memories in Gayong. This time though, the memory became a painful one. After so many years, I visited Pusat Latihan Tertinggi PSSGM Air Kuning, Taiping and the sight before me was really a shocking reality. My heart broke to see the sorry state of the place. Once the place where so many Gayong warriors practised and received personal attention from the founder himself, the late Dato' Meor Abdul Rahman, is now a dilapidated ruin waiting to bit the dust. The place is now ghostly eerie and almost unrecognizable to me. It was abandoned and lying vulnerable for a new development. A legacy is there no more.

It was believed anak Gayong numbered more than 100 000 and scattered roaming the globe. We should all weep and cry for being so helpless. The least is feeling ashamed to ourselves. Tiger is now becoming an endangered species. Is the tiger going to roar one more time? I keep asking myself. Only time will tell.

Anak Gayong congregated on the beach for Khatam keris. This was during my final year in UKM. This khatam keris was the last attended by Allahyarham Dato' Meor Abdul Rahman. This orthodox silat chapter took place at Port Dickson on the 23rd. June 1991. It was a symbolic gesture of a naga, a mystical creature pulang ke laut. 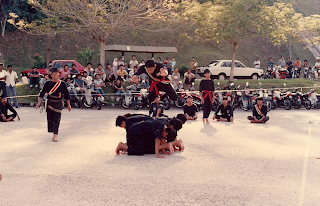 One of our activities was performing a silat demonstration during special ceremonies for the KAMSIS. This was my first and I was very nervous for missing several steps. Harimau mengambur mangsa - I was not the one leaping high in the air, but a mere junior crouching waiting for my turn. 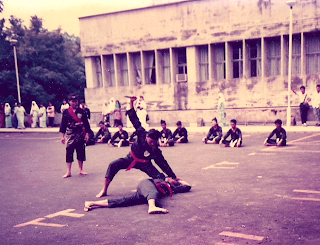 A knife duel in front of PUSANEKA, perfomed flawlessly as this was my senior year in my alma mater and also becoming one of the sifus in the gelanggang. 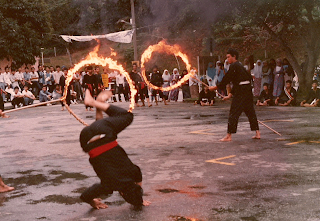 One of the test for our obedience, courage and skills - A fearless tiger never hesitates and accepts all challenges 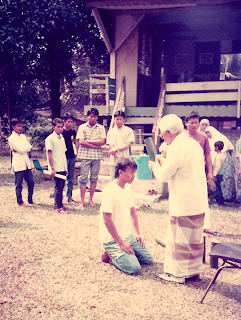 In one of my visits to Air Kuning to undergo several initiation processes and mandi minyak. Allahyarham Dato' knocked and broke a bamboo on my head. His son cikgu Sazali (Harimau berantai/Singa Malaya) was the one wearing a brown shirt nearby. 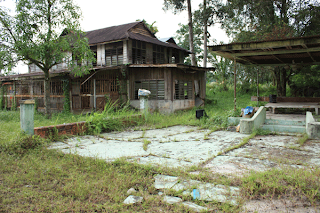 The last standing legacy (as of 2nd. May 2010). These were what left of the once a prestigious place for Gayong warriors to equip oneself with intimate knowledge of Gayong vast secrets. For the mortals, we have to accept the fact that nothing last forever.
Posted by DrSam at 8:03 PM

Doc, you're a very good story teller. You should have your column in The Star or NST!

Hebat Doc! Now I know who to call for protection, hehehe...

But seriously, it is good to have some defensive skills. I learned a bit of aikido at university but couldn't find a training place when I started work in JB. In KL there are places that teach this art... maybe I'll join and re-learn something.

Hmmm.. the place perhaps is almost not there.. but the memories within lives forever..

p/s: How small the world is. All you need is a few things to complete the cycle. Zzzzaat!!

small hiker,
Thanks for the compliment bro. My learning curve is still very long. Still strugling to fit in my technical writing in scientific journals.

Good for you too. In K.L there must be a number of Aikido dojo around. One good dojo I remember which is taught by a Japanese Master (with her daughter) situated somewhere in Sri Hartamas (saw an interview in TV). Maybe you can ask Uncle Google for the address.

payarumput21,
One sweet memory too bitter.

madam gold,
Thank you madam. Nowadays, our job requires us to do a bit of this and a bit of that...multi-tasking they call it...in this kind of environment, multi-talent is an added advantage.

whoa! you were such a warrior!

don't judge a book by it's cover!

sally,
I know...I know...many men are very good at this skill too, especially on the Friday night :)

Be cool and have a nice weekend with your beloved family.

Dinda hulubalang, nowadays kids show off their lipat repertoire at wedding receptions - which Abg RA really disapproves of. He himself pernah nuntut from a certain wak jowo tp tak tamat hehe but enough to impress yours truly *winks*

You've got to re-hone those skills dinda - awet muda tau!!!

Zendra-Maria,
Kanda, the thought of re-hone my passion is always lingering in my mind, but having to endure back all those demanding physical regines had really made me think not only twice but many times - especially with my previous back problem. The only thing that I can thing of to re-live my dream is to set up one gelanggang for our younger generation.

Probably next time both Kanda RA and myself can show-off a little bit infront of a pengantin too :)

Aiyakkk..didnt that once a week silat skill laaa.. hehe

Typo:didnt mean that once a week skill..