The picturesque Tanjung Jara, a quiet but uncompromising bustling coastal village in Dungun so long had been existed by her own without a hint of glamour. This status didn't last very long though, until some years back when the F1 world champion Michael Schumacher during his restful retreat at this peaceful sanctuary decided to treat himself with his newly found talent in football and challenged a local kaki-ayam FC for a friendly kick-off. This single event very quickly became the much-talked about subject in local and international news and managed to shift the spotlights from Sepang to this sleepy fishing village.

This blissful beach is hidden from the untrained eyes but not that further away from the trunk road of Dungun-Terengganu. This less known beauty is only a few kilometers away from another more popular beach of Rantau Abang. Its enchanting beach golden beach washed by inviting turquoise waters, sloping gently into the greenish wide open sea is very prominent. There is a cave below the end of the hill near the shore, where visitors can go in and get to another side to embrace another breathtaking view of the blue-green water of the South China Sea. The water is so clean and calm enough for a dip. There is also find a lanai-style gazebo on an elevation where one could get a bird-eye view of the coastline. Close to this beach is Tanjung Jara Resort, which won the Aga Khan Award for Best Muslim Architecture in the 80s. For the unwary travellers who are a bit adventurous, further away we can see Pulau Tenggol and Nyireh, prolific diving sites for avid divers.

Having all these intoxicating beauties lingering in my mind, this led me one find mid-afternoon to re-route my journey back home and stopped for a while at this beautiful spot to rekindle my sweet memories living in Dungun 35 years ago. The charm is still there even though I could not find the exact jutting barnacles-covered rock formation where at the very young age I stood facing the sea and braved the splashing wave that kept hitting my face. As I was strolling along the sandy beach in a less fashionable manner, under the watchful eyes of bemused local dwellers, I suddenly realized nothing stays the same, not even the hill, the beach or even the people around me. But those changes are most welcome. They add some charm to the place. In a way they made me feel that I am once again belong to this place.

I then said to myself "ahhh....what a refreshing feeling. I am coming home !!!!! 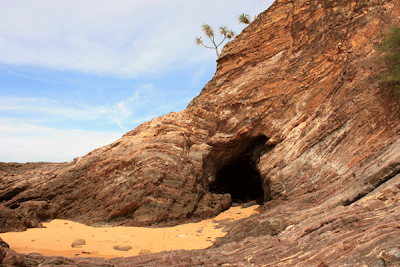 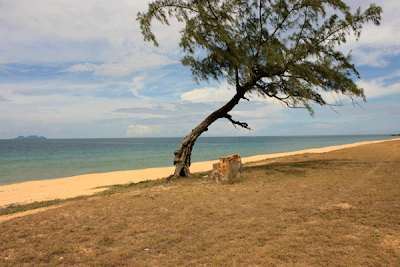 Tanjung Jara is like a forbidden kingdom for most of Dungun folks. Randomly select 20 Dungun's people and ask them whether they have been there or not and all you will get is disappointing answers. It is indeed hidden but the beauty of neighbouring shore, Pantai Teluk Bidara (which is also hidden) tells the poor folks how Tanjung Jara looks like.

I have taken my Sarawakian friends to stroll about Pantai Teluk Bidara. They fell in love with it instantly.

think i recognize that 'pondok'laa..
hehe..

...were thousands of times through and past the junction to Tanjung Jara, not even strayed into the world-renowned location... just enjoy the sceneries on the billboards...
viewing your pictures, just feel like tomorrow I will be there for the breakfast on the beach... heh...

sir pok deng,
frankly speaking, I was not sure at first which one Tanjung Jara and which one Telok Bidara. Both are a stunner!

Afida Anuar,
Salam and welkang here Afida. During my childhood time, i spent many in the river close to the Manir bridge as my aunties and cousins lived there. Now they have to moved out due to the road expansion - what a pity.

yohteh,
I presumed by this time you has already strayed onto the beach and dipped your feet into the shallow clear water. How was the breakfast yohteh?

Maria-Zendra,
I take it as a compliment kanda, merci...merci...bila mau ke Ganu kite?

Naddiea,
As long as Seberang Takir is still in Terengganu's map and not being walloped by the current rapid development, I think you can still claim yourself a ganukite :)

piewahid,
Salam piewahid. It is just a blink away from Kuantan. Just pack you bag bro.

aliff muhamad,
Salam aliff. Tanjong Jara Beach resort may be a bit out of reach with the price on a higher side. But the beach is there for us to roam free.

Wan Sharif,
No problem Pak Wan. In fact I would be very pleased if you use those beautiful photos and promote the beauty to the others.