I missed my bed while in Rio de Janeiro 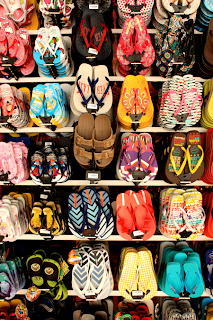 Virtually 28 hours of air traveling halfway across the globe that almost comatosed my bum, one connecting flight later, hundred of gallons of orange juice to keep my sanity well alive and a lengthy movie marathon to pacify my boredom, the plane finally landed and I was breathing the fresh air of Rio de Janeiro, Brazil. That was the longest continuous air travel for me so far. If I take into account the time spent wandering slowly in the airport terminals and painstakingly looking at the tv screens waiting for the boarding time, this journey actually took almost two days to reach the final destination.

It was a week after the Eid and the festive mood was still high. I still could smell some traces of rendang on my fingers when I left my house that very early morning to the airport. The tropical storm came down like cats and dogs halfway through the journey to the KLIA. Despite the rain pouring down heavily, it could not wash out the sweet festive memories left behind. The memory stick just like the persistence rendang smell on my fingers.

Traveling alone is not something that I was looking forward to especially after having a short but marvelous Raya break at my kampung. It was the call of duty that dragged me away from our glorious Bolehland. If not managed properly, traveling alone can pose a dangerous life-threatening problem too. Boredom is the main culprit and some believed it can kill. Luckily I survived.
As this trip was not one of my exotic holiday escapades and meant for an official duty with limited time to explore this vast state of Latin America, I purposely arrived a day ahead of the congress in order to deal with my anticipated jet lag. It did surely hit me well. Like a pampered Persian kitty, I slept for almost entire day and night and still feeling groggy even during the conference presentations. This however did not surprise me at all as many people experience similar effect even if they do not travel that far, especially in a monotonous meeting room.

The good thing was, there were some free slots in between the conference when the council members have their numerous meetings and luckily I was not one of them. I think the congress organizer understood well that many participants who came all over the world and travel this far to Brazil were expecting some kind of local adventures. They knew you could root and decompose in you seat trying to munch numerous data and digest endless scientific discoveries during the entire 6-day-long congress and of perhaps becoming intellectually comatose for that short period of time. So the organizer offered remedies by offering short excursions and I took a half day excursion trip in between the free allocated schedule just to satisfy my travel curiosity.

It is unfair though to pass judgment on this exciting and mystical place from that half day excursion. Though, I found this place to be a bit intimidating as almost every local speaks only Portuguese and most importantly there was no kedai mamak for a plate of palatable nasi lemak for me to enjoy my breakfast. Personally I found Rio de Janeiro is superficially attractive. Just like durian, I need to dig deeper and put extra effort in order to get into its heavenly fleshy fruits. Perhaps another trip to the mysterious Amazon jungle dancing with piranhas will make me appreciate Brazil more.

I think by now you have already figured out that beaches are one of Rio de Janeiro's tourist magnets. They attracted horde of sun worshipers when the sky is clear. Copacobana, Ipanema and Leblon beach are very popular. But Copacobana is the most famous of all and one very interesting place to be too. Especially for 'turtle'-watching.

If you are wondering why the above beach photo look so deserted, wait until the sun started to reveal its glorious cosmic rays. By then beautiful young ladies will come out and baked their tender skin with the UV. These girls however were not one of the girls in Tom Jobin's "The girl from Ipanema". The beach was just across the road, in front of the venue. So these kind of sighting was quite unavoidable.

This was one of the reasons why I felt sort of intimidated whenever I went to the beach. With conference attire and a camera in hand, i was actually considered over-dress and a bit out of place. These Cariocas (the locals) played beach soccer was a norm, displaying their muscle and bare chest and their skill for others to admire.

Rising 396 meters above the Guanabara bay in Rio de Janeiro, one has to take two cable cars to reach the peak of the Sugar loaf mountain. With this relatively shorter scale, I am however still wondering why this piece of jutting rock is called a mountain.

The 360 degree top view of this so-called mountain can be breathtaking though. On the top left corner you can see Copacobana beach. It seems that Rio de Janeiro is not flat at all and the view from this peak revealed many other surrounding 'mountains' as well. Corcovado mountain, where Christ the redeemer statue is can be seen from here on the top right corner of this photo. One of James bond's movie, Moonraker was also shot here in 1979.

These coconuts and batata fritas have become my regular diet during lunch breaks. Unlike our Bolehland of which lavishly provides scrumptious food during any of our internal and International conferences, our far away counterparts somehow believed that eating more food during lunch break will retard our mood to continue the evening sessions. But having to lounge myself on this strategic spot with a couple of newly acquainted friends was again a cool experience.

At 30,000 feet above the ground level and cruising at almost Mach 1 warp speed, having these sate on-board of our national carries was a marvelous way to end the interesting journey. In a way this bring back the festive mood in me. But still, I missed my comfy bed at home.
Posted by DrSam at 9:41 PM 39 comments

For those of my good friends who had been sending messages and phone calls asking for my quietness for not replying to your query - I am now sending this special message from the other part of the globe especially for you my precious friends to say that I am really sorry and please forgive me for my unintentional unpoliteness. Now I am missing nasi lemak and all the Raya invitations. Jeles...jeles...

I will be salivating over nasi lemak for the next 2 weeks, stuck somewhere on the other part of the continent. Have a good and enjoyable life friends.
Posted by DrSam at 11:40 AM 32 comments

Email ThisBlogThis!Share to TwitterShare to FacebookShare to Pinterest
Labels: learning to samba

Have I missed the boat?

As the previous year and many-many years before, the most anticipated guest of honor is leaving us one more time. Many who welcome this guest with utmost expectation and diligence will weep and sob in sorrow for this special guest is now returning to the Almighty delivering confidential reports upon our hospitality for the duration of the visit. This exceptional guest named Shahrul Ramadhan is blissfully sent by Allah S.W.T to us, the true believer to grasp all the special offerings this holy creation has to offer. Within this mysterious month, there are many secrets within the secrets for us to uncover.
For this humble mortal being, this year's Ramadhan has being so meaningful as many revelations upon revelations unraveled unwittingly and consciously to ponder upon, and yet many more are still elusively well obscured even some are staring right before the naked eyes. Perhaps the other basiroh is still clouded with the past sins thus requires more self-cleansing. and self reflection. I hope to those who are sincerely seeking for the barokah and all the rahmah from Allah S.W.T, have fullfiled Ramadhan's and their own personal KPI with flying colors. Ma'assalama...

I, being the lesser creation am humbly hoping to stand strong next year in order to welcome this special guest again with an open heart. Insyaallah.

Having said that and not to miss the festive bandwagon and the current merry mood of the blogosphere mainstream, I am taking this opportunity to seek forgiveness for all the wrongdoing and any mischievous conduct while roaming this cyberspace.