Once upon a zen in Kanazawa

The first time I hit the Samurai-land, I instantly realized that if I don't find the right partner to talk to, I will become a mute traveler throughout the duration of my visit as these Samurai descendants don't speak much in other languages apart from their own. As an avid Manga fan, I should have perfected my broken Nihongo or at least memorized few kanji way before I started to fall in love with sushi.

Japanese as you may know is a very proud nation. They only eat sushi with wasabi and not with any other fancy Western condiments or even our popular shrimp past, belacan. That shows how proud they are with their food, their language or even Doraemon and other monster-kicking superheroes, of which symbolized their ingenuity and creativity.

After slightly seven blissful flight hours from KLIA to Tokyo and another one hour by a domestic flight, I touched down at Kanazawa. This town is located on the West coast of Honshu. This time around, the purpose of my visit to this captivating city was to nurture my ever shrinking brain with as much academic input as possible plus another secret rendezvous with my significant half.

Actually, I almost took a ride on the famous Japanese high-speed bullet train, shinkansen just to experience this warp-speed machine and looking forward at the same time to have another orgasmic ride that blown one into oblivion. The prospect of taking the wrong train though and being blasted into another unfamiliar Yakuza territory really put me off the idea. Mount Fuji, the initial motivation for embarking onto the train was heavily clouded and obscured with heavenly mist, so I thought it was not worth the effort, except for that orgasmic part.

Nonetheless, all disappointment and frustration of not seeing the majestic mountain was soon evaporated. After being greeted by staffs in quaint Japanese costumed uniform and our arrival heralded by few polite bows and a plate of hot misty towel to wipe our our oily face diminished any inferiority complex I may have earlier. What can I say? When the wicked die they go to hell, but the righteous are assure a reservation at the nice hotel of Nikko Kanazawa. Splendid services all around. The staffs were not only polite but also thoughtful. Like any other international star though, the 'Rainbow or Ruby channel' was just a click away. You just have to tame the demon inside.

As usual, food could become a big issue while abroad and Kanazawa posed the same problem with no exception. Smoked unagi and plain sticky rice became my staple food. One thing I found very useful was the abundance of vending machine that sold almost everything unthinkable from disposable underwear, designer sunglasses, hot Japanese date for a day (I mean the magazine). You name it. Everything that comes under the Heaven and Earth you can pull out from that wonderful machine.

Kanazawa was among the few city that was spared during World War 2 air raid. There were many Edo period architectures still standing and well preserved. Such excellent examples are the old castle town, Samurai district and Geisha entertainment district. Kanazawa tourism offers many excellent tourist activities in the city which includes some fine museums, the 15th Century 'Ninja temple of Myoryu-ji with its interior secrets and trickery and the labyrinthine bustle of Omicho market - a great place to eat seafood. But Kanazawa unchallenged attraction is the sublime Kenrokuen garden.

When the joys of blissful life become overwhelming sedated in Kanazawa, a short stopover in Tokyo to sample metropolitan lifestyle and the vibrant Shinjuku area and digital haven in Akihabara before coming back to my routine life was a perfect solution. But the night in Tokyo was never quiet. That night my restful sleep was disrupted by a continuous and persistent thumping coming from the room on the above floor. It lasted at least for 30 odd minutes. My theory, Japanese is really a hardworking nation and they work throughout the night with Bushido spirit in mind. But when similar mysterious noise came from the adjacent room echoed the same tune, I started to believe that some early morning raw sushi-eating session was seriously in action. My significant half and me just looked at each other in our blanket and grinned like silly youngsters. Still I really wanted to believe the former theory. 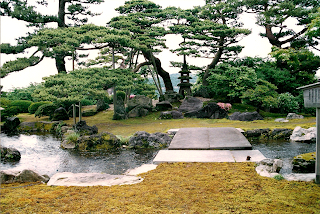 Kenrokuen is known as one of the three beautiful garden in Japan. It is called Kenrokuen because it combines the six attributes (kenroku) that a garden should have: spaciousness, seclusion, human ingenuity, antiquity, water and panoramic view. Fantastically calming and perfectly balanced.

Kanazawa castle has been the residential castle of the Maeda family since Toshiie Maeda entered the castle in 1583. In 1881 all the castle walls apart from Ishikawa-mon gate, were destroyed by fire. Three structured Hishi-yagura, Gojikken-nagaya and Hashizumemon Tsuzuki-yagura were restored. They are the largest scale wooden castle structures built since he Meiji era in Japan. 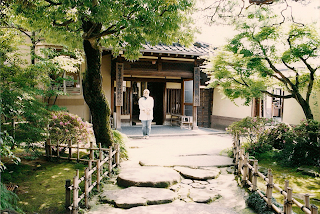 The house of Nomura family, the ancient site of a Samurai house. The garden was exquisitely beautiful and skillfully laid out. There is a unique, more than four hundred-year-old myrica tree which is said hard to plan here in the Hokuriku district.

Higashi Chaya district or Geisha district. Narrow winding streets and latticed windows. Higayashiyama is the heart of old Kanazawa. While here I managed to catch a glimpse of geisha hurriedly preparing herself to work. Too mesmerized, I could not capture the photo with my camera. Here you can also drink Japanese tea added with pure gold leaf. I didn't have gut to try.

My hot date for that evening, my lovely geisha in front of a section of Kanazawa castle. 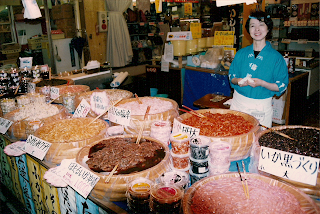 Omicho market is the kitchen of Kanazawa. This popular downtown market serves varieties of food in gastronomical proportion. I was quite tempted to jump into one of the many nice looking sushi bars in this market and dipped into suhi and sashimi eating frenzy. 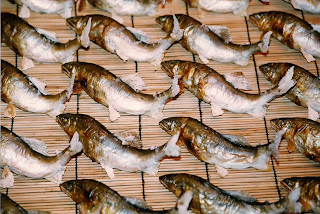 The fish on the stalls looked all very tempting and many weird looking sea creatures were also on display. Apart from unagi, this smoked fish was also becoming our staple diet. 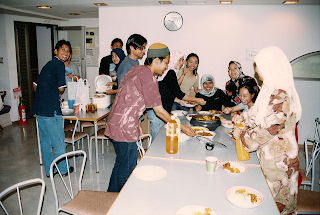 At last our prayer to satisfy our taste bud with some local cuisine was answered. Toward the end of the visit we met our local students at the University and for the first time in my life chicken curry tasted so good. 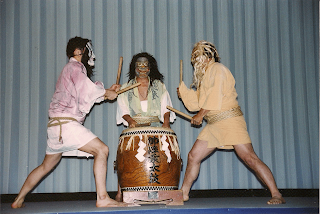 Part of Kabuki/Noh theatre to end our trip to Kanazawa. But I am quite sure, our sleepless night in Tokyo has nothing to do with this heart-thumping performance.
Posted by DrSam at 9:42 PM

mom always said Japan isn't that much insteresting as Switzerland.
i dunno why.

would love to visit japan someday, especially in spring season...hehe

Hahaha, ada org lain kat sebelah ber rendezvous sama ya...
You're doing a good job at this tourism promotion like the one about Bali.

I was in Japan for 6 weeks a long time ago. Every morning day and night i drank green tea - i grew to love it and it is supposed to be the secret of the japanese good health but back in Malaysia just couldn't resist our unhealthy teh tarik :)

mirachantek,
personal preference differs from each person to another. I love this part of the globe as they tend to be more colorful as oppose to the Western world - too monotonous.

Nad,
Spring is always a good time to visit these place Nad. New life starts to show its color.

I supposed tea was not very kind to my tummy even though I like the natural taste of green tea. Berangin memanjang.

Honey-moon with that geisha is surely a memorable and sweet one :)

Salam Doc,
Nice posting..educational and informative for person like me who has yet to visit "negara matahari terbit".
Macam boleh belajar vocab bahasa jepun dengan doc nie.. or at least those related to your line of work.
Have a good day!

There's something interesting about the thumps you guys heard during the sleepless night wasn't it? Apologies for my young brain works that way, but I think the reality couldn't go far from truth.

Unagi... that's my all time favourite. I do love sushis too!

First of all, send my warmest regard to your Geisha yang comel tu :-D

Bro! I am almost expecting a photo of both of you in either kimonos or samurai outfit in front of the castle - Has it been fully restored?.

Whoa... isn't that a blissful and heavenly trip? Beautiful gardens, beautiful landscape and a beautiful Geisha accompanying, I hope that the weather agreeing too - no rain I hope? What I heard is it rains almost half of the year in Kanazawa - betul ke ya?

Ah.. another place to put under my travel wish list....

Sir Pok Deng,
Hi...hi...that thumping experience still brought smile to my face until today. You don't have to apologize sir, because that shows your young brain is working perfectly fine.

Mia's mom,
Salam sis. Insyaallah will convey your message to my lovely geisha :)

They castle seemed to be fully restored now. I did not see any construction/renovation work in progress, so majestically elegant and like a brand new monument. The design itself is so simple (not clustered with unnecessary ornate) but yet so beautiful. Tak sempat berKimono sebab jadual terlampau ketat diheret ke hulu ke hilir oleh tragel guide.

yes you are right sis. It was quite wet there and we both have to walk in a cuddle under an umbrella on those wet days. I think the weather was so kind to live up the 'honey-moon' mood for us :)

how lucky you are doc! i always dream to be there... or visit there.

i love everything japanese. it doesn't mean i've forgotten where i belong and who i am. just that i want to be like them... hardworking and discipline!

apart from that, i want to see with my own eyes, the country itself.

btw doc, the smoked fish... got egg inside right? i ate something like this at the japs restaurant and we simply called it 'pregnant fish' haha

Faisal Admar,
Yes, you are right Faisal. there are many things we can learn from them - discipline, hardworking, loyalty, creativity, sense of belonging etc. those are some of the positive attributes I think we can adopt in our daily life.

I saw one documentary to test the Japanese integrity (a documentary done by the Westerner). They left a very expensive camera on a very busy street

i miss nippon so bad!

Japan to most of us occasional visitors is a land of the pleasantly unique surprises. The best and almost unappeciated one is surely the very polite and attentive immigration staff ... totally unmatched in all the countries I have ever visited! The introduction to you what politeness is all about in Japan!

Did it strike you, too?

Red Alfa,
Salam kanda RA. I think you are quite right, even though I didn't pay much attention at first (as I was too busy and concentrating on finding my ways around the airport :). The subtle and soft attitude is a big contrast with their descendants during the WWII. Something we should learn and adapt.

I love almost everything about Japan...especially Geisha yang pakai tudung...hahaha!