An unforgettable urinating experience in the Land of the dragon 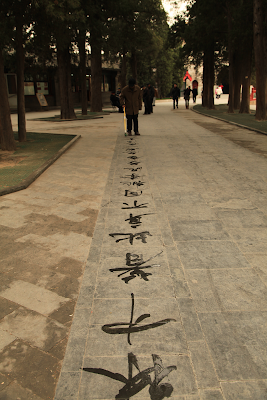 It may sounds a bit weird or perhaps utterly nonsense to have such an exceptional eye-opening experience during my inaugural and virgin trip to the Land of the dragon which somehow has something related with the loo. In fact it is aptly unfitting to discuss this intimate subject matter in an open forum especially in the first paragraph of a would-be epic journey that I will remember in years to come. The loo by itself presented me with a new life perspective and invaluable insight into what our life would be without a toilet.
This time around the visit to this part of the world really tickled and aroused all my senses. I can still smell that signatory pungent odour even when I type this particular paragraph, or at least the smell kept lingering in my subconscious mind, perhaps for the time being until I come across some other form of life-changing moment.
Modern China was a new territory for me. All this while I kept hearing about the Chinese majestic and huge stone walls and gates, the legendary and hidden myth of the many opulent palaces, the serene and splendour of beautiful landscapes, the food, the people and all the unique cultural splendour associated with that big continent.Those vivid images became like a moving wall paper in my head. This time I got to see them all with my own eyes.
At the time of my visit to Beijing- the Northern capital of China, it was quite chilly, dusty and overcrowded mainly with Peking duck eating dim sum. My first impression on this inanimate metropolis was quite monotonous and lifeless. Perhaps because there was not much colour to feast my eyes during this cold season of the year.Or probably I had already embedded in my mind a preconceive idea that all big metropolis are similar - pollution, rush hour, shellfish and lack of warm hospitality.
One thing for sure, Beijing is no more a sleeping giant and really geared up to become another world economy superpower. Everywhere I turned my head to there were new commercial high-rises being erected. These uninviting sight was really an eyesore to me though. Hutong, a collective name that describe traditional and ancient courtyard residences that was build thousands of year ago is fast disappearing to make way for modern but nondescript skyscrapers. I was actually looking forward to spend some time mesmerized myself with the old China, walking slowly in the narrow Hutong alleys and blending myself with the local people. It never materialised. Five days in Beijing was never enough to deeply get to know this place. I should have spent my entire life there to do so.
I think my bladder is quite full now and it is time for me to visit the loo - this time minus the smell of course. 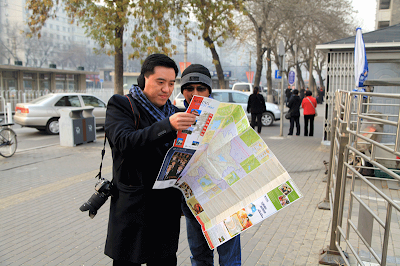 If you can't speak a word in Mandarin or any local dialects of which could be hundreds of them, I am very sure you will have the highest possibility of going nowhere or worst thing get lost. I was quite lucky because one of my fellow companions can speak Mandarin very well (as he should be)- somehow he told me, he himself got so confused and found out it was sometimes very difficult to communicate with the local. That's the way to go Mr OCW and thanks for being a good traveling companion and our indispensable translator! 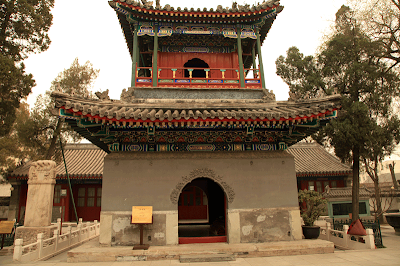 Niujie mosque is the oldest and largest mosque in Beijing (996 AD) and was innitiated by an Arabic scholar Nasuruddin. The chinese influence was heavily incorporated - at the first glimpse from outside I thought this was a Chinese temple.

As it was almost past noon, my empty tummy had more command than my head. I was quite pleased to know that the whole surrounding area of the Niujie mosque was lined by halal restaurants. We just gatecrashed into one of the nearest restaurant and the meal here was very
appetizing and tasty. 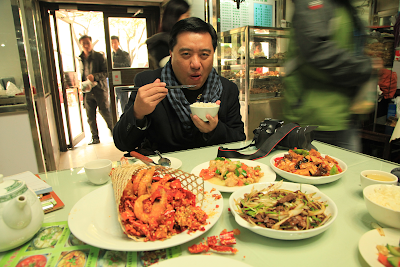 Tuck in Mr OCW! We didn't realize the portion was that big and even though the three of us were very very hungry that day, still we could not finish and wallop all the dishes. Tapau meh... 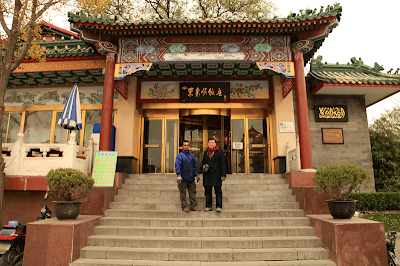 It seemed finding a good and halal restaurant was not that difficult after all. That was the only time when I didn't require the service of my mandarin-speaking friend as the signage was written in Arabic. This one was right across the road on the east side of the Tiananmen square, only a few meteres from the National Museum of Beijing. The oxtail soup was marvellous - my friend told me, for me as usual I went for nasi.

This pair of insulated glove permanently mounted on the handle of a moped symbolised the creativity of people in China. Probably the most common sight during winter. I wouldn't try to put my hand inside those gloves though. 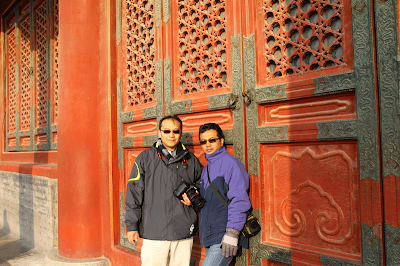 I like this photo especially my good-friend pose of which reminded me of the yesteryears in the high school. Leaning against the ornate wooden wall of the Hall of Supreme Harmony inside the Forbidden city, he posed just like a pop yeh yeh stud. 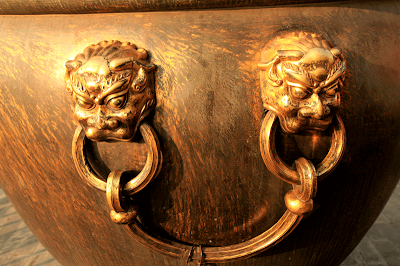 Beijing has a rich history and a fair share of foreign invasions. This big gold jar which meant to contain water for fire-fighting inside the Imperial palace was scrapped for its precious
metal. 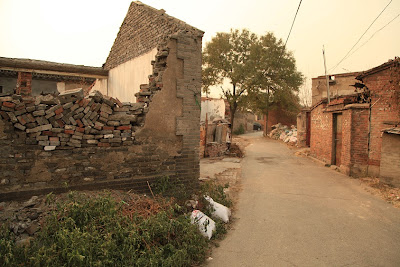 The sad remnant of Hutong around Beijing. It was not a good sight to see and I was really hoping the next time I visit Beijing there are still some preserved Hutong that survive the brutal onslaught from Beijing fast modernization. 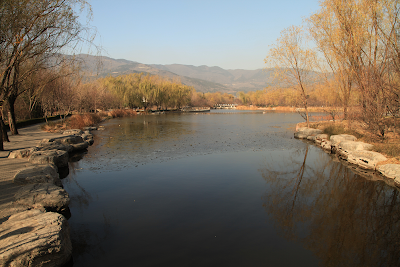 This almost post-card perfect photo (by my own definition) was taken in the Beijing Botanical garden. The water of the lake was frozen hard and almost ready for some nickampook to ice-skate on it. 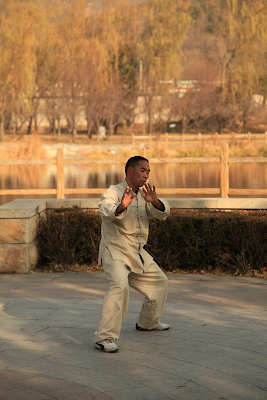 As I strolled slowly following the quiet path around the lake inside the Botanical garden I noticed this man gracefully practising some form of martial art. Perhaps a Tai Chi. I sat down and watched this man performing his unique moves until one of my colleagues asked me to join in "ajak le dia bersilat bro" 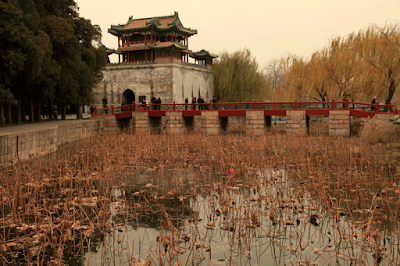 The day we visited the Summer palace it was predicted to be covered with snow. It never happened (the snow fell two days after we left Beijing). It was ear-biting
cold.

On our first night, after a few hours of self-acclimatization in the comfort of our hotel, we took a 40 minute trailblazing taxi ride north to the Olympic village to see this beautiful architecture called the Watercube. I personally thing this building looks much better in the night and very photogenic too with lot of distinctive curvy shapes.

Another architecture wonder, Beijing National stadium which is also known as The Bird's nest just a few steps away from The Water cube. 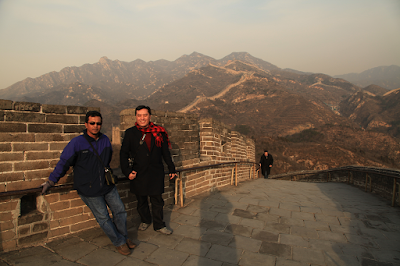 Scaling the stone path of the Great wall is not a joke. It really requires stamina and determination. I only managed less that one kilometer and I know age is catching up too. I should have jogged
more.

Another great view at another section of the Great wall. It is the Badaling section of the wall which is quite popular by tourist for its 'friendliness' and considered quite forgiving for an ageing traveller like me.
Posted by DrSam at 10:47 PM 32 comments

Email ThisBlogThis!Share to TwitterShare to FacebookShare to Pinterest
Labels: Beijing 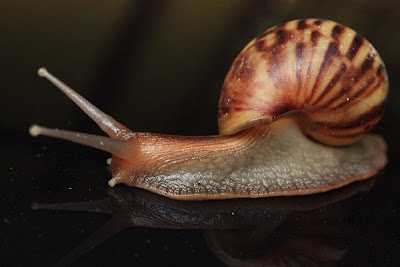 The lone siput babi that slowly inched away on the bonnet of my car one blissful morning must has some powerful dose of aphrodisiac properties that invoked my dormant state of mind. The docile neurons immediately sprung up and erratically scrambled the right signals to activate the brain. The urge to put some life into my long-forgotten blog was irresistibly strong.

The pace of my life has to be dangerously close to the lightning speed, especially during last two quarters of this year. It superseded the sonic boom barrier. I've almost lost count of the passing days. My life has been very hectic but yet very fulfilling. Many things happened which undoubtedly make this life very interesting. Even though I am no longer chasing the rainbow and never intended to, I found the colors of the rainbow are becoming more and more beautiful each day. From my years of observation, I realized that chasing the rainbow can be very hazardous and detrimental to health especially to the aging people like me. The rainbow will come if you are at the right time and right place - God willing.

Despite the momentary lapse of time and I missed all the fun in this wonderful Blogosphere, I can't help myself but wondering - why on earth this slow-pace and interesting creature has to be called by that undeserving name? Which part of the snail resembles a "babi"? The look? The behavior? Or simply because our jolly good nasi-lemak-eating nation found it very amusing to label anything with such a weird name. Perhaps these questions can be addressed in a more academic manner and become a good sociological study in one of our local universities that of late sprouted mysteriously in abundance. Perhaps "The babiness of a lone siput babi" could be a good title.

Somehow, I have to thank that particular siput babi for tickling my brain and become a good precursor for my brain to start wondering again on some rubbish issues. Most importantly I thank that siput babi for making me realize that I still have a blog.