Free is always good...come and get them!

I think many of us are having a similar dilemma or share the same 'problem' as I do. We sometimes failed to realize that our home sweet home, over the years had and could become a good dumping site for many unused usable items laying idle somewhere in every corner the cockroaches can reach . I won't be surprised if we look closely and list down every single items in our house and come out with a good and discernible asset inventory we will find for example an extra rice cooker that was given during our wedding day sit on the top of the shelf, branded handbags from annual mega sales shopping frenzy hidden somewhere in the closet, extra golf set to impress prospective business partner but at the end failed, an expansive-underutilized and problematic maid sitting aimlessly in one corner of the kitchen or even a stockpile of Scud missiles post-Iraqi war at our own backyard as a unique memorabilia. Those unused items and artifacts if left idle much longer will surely degrade, rot, gather dust, reduce in aesthetic value (read menyemak) or even pose a health hazard to us.

With all that scary possibilities in mind and after some poking into my left and right brain, I've come up with a "syok sendiri', bombastic but holistic idea. I've decided to set up a special platform in this Blogosphere with the intention to share the items with you, my trusted fellow bloggers in hoping that those unused items will find another good home, good owner and good use. It is a concept of recycling things and the best thing is they are free (if you don't include your petrol for traveling).

You can have a peek into the new blog "khas untuk Blogger aje" to get the feel of the concept and see if there are items of your interest for a quick grab. It is still in its infancy and any suggestion to make the idea to flourish and metamorph into a community playground is very much anticipated. More items will be added up from time to time. I just have to find the right time to gather all those items and convert them into a photogenic material.

If you want to take one step further though and make this effort a blessed one which hopefully can becomes a future saham in our next life, a sincere donation as a token for those items which can be used for many good causes is very much treasured too. One immediate recipient that come into my mind is a surau in my neighborbood (Surau Al-Hikmah) that is now being upgraded into a KAFA. I hope the work can be finished just before the fasting month. You can bank in your token/donation into the Surau's account and come and get the item(s) of interest and value to you from me.

Those items could actually well be featured in our local lelong scenes or other international auction platforms but I don't feel like doing so because by jumping into that bandwagon this effort will loose it personal touch, exclusiveness and not cool anymore. That however is just my personal opinion.

Perhaps another idea is, other Bloggers can chip in too in this effort by disposing and recycling their unused item through this platform for the benefit of the others. Just email me the details and I will post them in the new blog. I promise I will accept and post anything but please don't dispose your grumpy husband/wife here - those kind of thing if you know what I mean.

Summary of the new concept :

1. Free unused but workable items to dispose/recycle
2. Collect yourself (small items can be posted/couriered but at cost of the recipient)
3. If you feel a bit generous, donate for any good cause (optional and no obligation)
4. Exclusive to our Blogger friends only!

Please feel free to comment, critic and give suggestion to improve this effort. Your endless support, my Blooger friends is very much appreciated.
This is just the beginning and I hope it won't be the last.

The first test kit for rainwater collection was safely landed on my table last week, the day after it was dispatched from the land of the hornbill. I was very excited because the samples were all in good condition and had already analyzed the samples. The report will be published here when I receive all the test kits from the other volunteers for all our bloggers to share and talk in office canteen and comment in kedai kopi. This small scientific effort could give some insight on the real condition of our atmosphere.

I am looking forward to receive the remaining test kits from our volunters and thank you very much for taking part in this small project.
Posted by DrSam at 7:11 PM 32 comments

It all started innocently enough

The first time somebody officially asked me about my ambition and I seriously replied with full of enthusiasm to become a scientist was in 1978. Without much thought on the dark secret life of a scientist, that was exactly my answer. I was in standard two at SIS Kemaman, my first year at the primary school after the hijrah from SOS Dungun. The person who asked me that significant question which later influenced the way I think and shaped my future was the bubbly Cikgu Zubir.

At this point, I have to make it clear that my ambiguous decision to pursue that ambition however had nothing to do with the prospect of how many girls I could charm with that bombastic ambition nor that I could change all the zombies into productive monkeys. But it has all the reasons in this world to influence my future romantic journey which took precedence over my entire life.
Oblivious to me at first, that childhood ambition was actually the precursor that endlessly ignite the fire that flamed the greatest love story ever - "cinta monyet di menara gading". The flame never died ever since. As any other great love epic- among others, the place was one of the important settings for this romantic journey to take place. My feeling over the years, subconsciously evolved and influenced by my surrounding, which were diverse in their complexity, unique characters and major players. 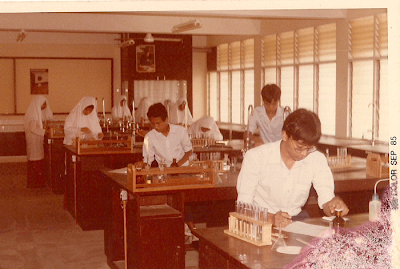 The sparkling new laboratory at the deserted new KUSZA campus marked its inaugural opening with load of enthusiasm by scientist wannabes. The first experiment we were asked to take on was on the exciting concept of endo and exothermic reaction of chemicals. As we were still very innocent, ignorance and careless - evidence from the naive faces in the photo, the idea of mixing chemicals that release or absorb energy was very alien and intimidating. The idea of courting and flirting with girls was also very alien and intimidating too. The natural surrounding dictated boys and girls should mind their own business. I hardly knew who were the backbencher girls in the laboratory or even in my class. They all looked very similar to me and I assumed they treated me the same. Teropong iman at that time was still in its infancy and under-developed.

That fateful day however, we saw one of our colleague at the end of the experiment had almost burnt down the whole laboratory (the one at the back who was seen seriously meddling with the Bunsen burner and he was also the one and only ardent fan of Eddie Lawson that I mentioned in the earlier entry - Dharma Kasuma). He lost his eyebrow as well.

My subsequent jihad to Bangi had presented me with a totally new perspective on life and a bigger laboratory to experiment with too. Suddenly the atmosphere had totally changed. Nothing seemed to dictate the way you dress, to whom you should talk to, where you should eat or even how long you could have your leisurely afternoon siesta and missed your important lecture. It seemed like a total anarchy. To survive one had to be strong and of course discipline.

I could not remember what experiment I was doing (in the photograph above) or what was the name of my project partner or in which lab the photo was taken because my mind was not focus as it should be. Luckily I managed to finish all the assignments, thanks to my project partner of whom I still could not remember his name. There were so many distractions. The only thing I remember was how excited I was and so looking forward to go to the biochemistry practical laboratory to do my assignment. For the first time, something had caught my eyes and motivated me to spent time doing my experiment obediently in that particular lab. For the first time I stayed focus. That laboratory was the perfect setting for some serious chemistry reaction to take place. It was irresistibly powerful and I am helpless. I blamed that on my puberty hormone. The jeling-jeling and senyum-senyum process started here.

I later also found out and realized that playing with fire in the biochemistry laboratory could be one hazardous endeavor especially if the fire is so big as what happened to my friend Dharma kasuma. Luckily I didn't loose my eyebrow. But over time I learned to control the flame and harnessed its affectionate power. Life was full of flowers and its smelled nice too. Flamed by unfamiliar but a pleasant feeling, that was the exact time when my teropong iman started to activate.
Ah...now that my mind is starting to focus a bit, I remember my poor partner was actually Dr. Asri of the RMC, the guy who endlessly broke the glass test tubes in order to prove that his hand was made of steel.