Revenge of the metal

me to transform myself into a snooping marksman recently. The recent rumbling and the clunking of metal, pounding hard in the middle of the night that caused my bed to tremble like a sweating jalopy has led me to sneak out into a stealth to investigate.

I was expecting to see some jaws dropping action by the Primes and the Decepticons in their epic battle or at leas a brief encounter with the shapely Megan Fox fighting a medusa-like Pretender. To my utter frustration, I was instead greeted with the dormant piles of rustic 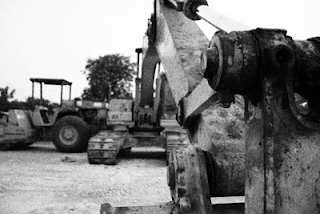 metals left idle by some unknown being presumably after some inconspicuous activities the nights before. What a turn off.

When I moved into this happy-go-lucky neighborhood and blended in well with the surrounding seven years ago, the atmosphere was so peacefully serene, surrounded with the rubber trees and other lush greenery that provides us our potent life essentials - more like the AllSpark. The air is still thin and kind to the noses and more than often we can even shrouded ourselves in a morning divine fog. However, of late active of land clearance and continuously sand-mining that taking place supposedly to give way to a new shopping mall and other conveniences have undoubtedly caused the residence a lot of

We are not only have to cope with the noise, the heavy metals that move about, in and out from the epicenter but also the flying microscopic dust that gives a new make over to the furniture, pollute our lung, costly structural damage to the building and mental torture to the many restful souls.

Since the 2004 Indian Ocean tsunami that hit this region, thinking of which I am also suspected from the covert activities of the Decepticons to revive their knock-off leader, Megatron from rotting in the bottom of sea, I noticed the 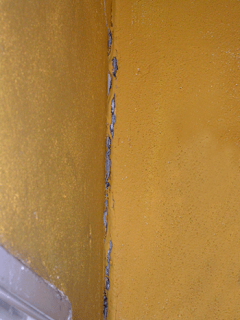 cracks on the wall are getting bigger and longer. The cracks were first noticeable right after the tremor hit our mainland, started with just not-so visible hairline cracks. Since then, I periodically mark and check upon the crack regularly to monitor the progress. Luckily, in my case the cracks are still considered small as compared to my other inauspicious neighbours. Some of them have to spend close to a mindboggling RM10k for the repair because the cracks were so big they can fall down and stuck in between the floors or part of their home is sinking fast into the ground. I suspected the soil under our feet is moving and shifting slowly because of all the hustle and bustle nearby. And the cracks are still re-occuring, even during this writing.

With the above unproven self-profess hypotheses, this has also led me to believe what Optimus Prime was saying "We are not alone in this planet". Using the Matrix of the leadership, I am sending out the signal into the other dimension, beyond our imagination and looking forward for the Autobots to answer the calling. I hope they will visit our neighborhood soon and transform this pseudo-platform into a heavenly sanctuary one more time.

If the sweet Megan fox come along, that is considered a bonus.
Posted by DrSam at 11:54 AM

Email ThisBlogThis!Share to TwitterShare to FacebookShare to Pinterest
Labels: we are not alone

Have a nice and blissful weekend.

Haze around here really taking its toll on me. Can't breath a normal air. Plus, my tonsillitis attack kinda gave me uneasy feelings and chest pain. Ouchie!

Selangor authority already authorized the project. The Developer certainly care less about the surroundings. It's not their 'space' that been invaded.

This case actually belong to the X-files. You have to send for Fox Murder and Donno Sekali to uncover the conspiracy at the top level. Harap2 Donno will discover that the top conspirator, the chain-smoking man, is actually her father - which explains the smog in your area of late.

Embarrased she might just disappear into the underground and join the Ninjas changing her name to Donna-tello, and carry on her fight there.

(Sorry Doc, got carried away by wild imagination)

Doc, tell me about it! You should see the cracks in my wet kitchen! Err... I'm beginning to feel that we live very near to each other. First, you seeked treatment at the same hospital I did, then you mentioned rubber estate??? Wah lau! You could be my neighbour at the other end of the corner!

DRSam,
U r damn good in writing. Make be believe that there is autobot living among us. Hehehe

And that the price we need to pay for development. In return we need to appreciate the beauty of Megan Fox instead of our environment. Hehehe

CAHAYA,
Probably we should engage RoboWarrior to do all the dirty job, dealing with those people and re-open sector seven again.

I hope you are coping well with your tonsillitis and have a speedy recovery. Take good care of yourself and have a great weekend.

Zendra,
Ha...ha...ha...that was really a good one. I presume Donno Sekali could also sing well like Doono Summer to the envy of Foxy Mulder.

Now I know, Madam Zendra can be really funny when she is having her wild imagination cut loose.

laki cikgu kimia,
A pure case of act of nature, nobody to blame for I presume.

Madam Markonah,
Now I am wondering...most of the cracks happened in the kitchens. On second thought, probably you ladies use 'lesung batu' too much?

Yes, perhaps we are in the same neighborhood all this while. if you are so close to the only rubber estate near TMC, then I presume your logical location would probably within a 5km radius from my home. Jabina...Mat Uda...does it rings any bell?

John Jenin,
Hi...hi...Pak cik. I can understand your predicament too. We men always appreciate nice landscapes and eye-catching curves. A real stunner I must say!

For a few moments there I was distracted when I read 'Megan Fox' :)

Hi DrSam
i guess that's the prize that we have to pay for development Huh?

Doc!
Those metals are definitely decepticons!
C'mon Doc- don't you want to be the Prime to lead the 'autobots' around the neighbourhood? :)

Move to my area (there are many bungalows for sales) here : D
I'll be more than happy to have you (especially sis Zayda) as neighbours!

aiyakkkssss need to put a halt to all this land clearing activities.... when ringgits has clouded the judgement....."

Syed,
You surely have a very good taste sir.

hazeleyed,
Hi there. True if there is really a need to develop. But in our Bolehland, it seems to me, the development is sort of a never ending story.

MariaFaizal,
Ha...ha...there are many Primes in my neighborhood looking for the Matrix of leadership. I am a mere earthling looking to find my peaceful heaven in this seclude part of the earth.

If you want to tickle you taste bud with the authentic dishes and signature cooking in the crack kitchen, gimme a call!

PerantauSepi1306,
Hope these will end soon. But when?

Sorry to hear abt that doc.The risk you have to face when living in ever developing area.You might enjoy all the conveniences but you might also end up being insomniac .
Give me a choice, I would rather tolerate squirels, birds,sometimes biawak and at one time snakes as my neighbours.Still I can get a gooooood night sleep...

madam gold,
As our Bolehland is still considered a developing country, they don't call it for nothing. Everywhere, everyday we can see these autobots roaming free and busy at work, and almost every towkey wanted to get their hand dirty.

Take up this matter to the authority! Dangerous if the crack keep getting bigger. Maybe the soil beneath is losing by the act of underground water..

Seems like you're enjoying the movie! Me too! It's not bad at all, I think.

New construction area? It turns me off many times. It screws my mood. They've killed my trees, my pond, my greenery. We need to stop them.

But how? Dok gheti ambe.

i simply love those B&W pics, they are nice!

aliff muhammad,
salam, yes you are probably right. But how to complain to the authority? Those are mostly work of the higher authority.

wahdi,
Thank you. My first trial with the new camera actually.