News on man-eating saltwater crocodiles roaming wild and roaming free in the shallow water of Port Dickson spread very fast of late. Several sightings were reported earlier but this apparently did not make into our local tabloid headline because story of suspicious looking creature lurking in a shallow water won't probably land them an extra profit. Not until few weeks back when an unsuspecting local tourist got bitten on his foot and was dragged down into the deep murky water of the strait of Malacca by one of these monsters, the news began to surface. Luckily he survived. The bite was so severe, he almost lost his foot and will spent his entire life, limping like the famous pirate Long John Silver. Even then, no solid effort has been taken by the local authority to warn people of the imminent danger. Bolehland style, everything goes under the carpet.

Whether the news was true or just another smearing-campaign by some irresponsible quarter, I have no way to validate. Since the advent of internet, rumor spread very fast, faster than the speed of a bullet. But ever since last week my email account was bombarded with stories and photos of almost smashed up foot of this unlucky guy. I am more incline to believe the news from the internet. Somehow, I always trust my gut feeling. On second thought, the elusive monsters could also be the infamous local 'skuad skodeng' actively on patrol or look out for their fleshy preys. Anyhow and anyway, just to be on the save side, watch out for any mysterious dark creature that lurk in the water folk!

Back to the main story (got sidetracked a bit by that croc chronicle). I almost had the same Long John Silver experience when I visited our Zoo Negara recently. Well not quite that bad to be frank. It had been almost eight years since the last time I brought my kids to Zoo Negara. So before the end of last school holiday, I bundled everybody into my old jalopy and we gatecrashed into that animal sanctuary very early in the morning. The idea was to avoid the crowd. Yes, we beat the crowd alright but the new entrance fee really beat me flat this time. I had to fork out RM76 for my six excited family members just to see the animals in cages.

If I am not mistaken, last time I paid only half of that amount. That was not all. They charged another RM5 for a ride on a buggy around the compound (which was free the last time) and another RM5++ if you want to enter the insectzoo, their latest attraction. I can't see any justification for those extra charges, in fact the reason to double up the fee too. Zoo is supposed to be a fun place for the public and the whole family. The management can increase the charge but it should be reasonable and affordable, gradually with time. Imagine the lesser mortals with bigger family members. If that was not insulting enough, 'teh ais' in one of the kiosks cost almost the same as the one in a five star hotel. You've got to go there yourself to believe it. I am not exaggerating this time. Doing a simple arithmetic and going by the current trend, I anticipate the cost would be phenomenally outrageous in the next 5 or 6 years time. Now I know the true meaning of inflation. Or was it greed?

I had enough of zoo-keeping to do in my office nowadays. Cubicle-style for staffs' workplace our offices adopted these days resembles much of the zoo habitat. Several office inhabitants even depicting some of the zoo's character - predatory, ferocious, opportunistic and to some extent cannibalistic. So why paying extra for the same show I can enjoy in my own playground. I just fasten my seat belt and finish my popcorn then. 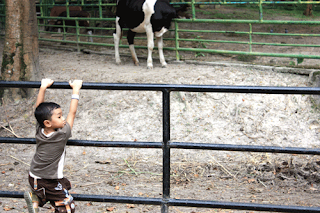 In these modern days, my kid has to pay some monies even to watch a cow grazing lazily in captivity. In the next 20 years or so , my grandchildren probably have to take a bank loan just to see chickens laying their eggs. 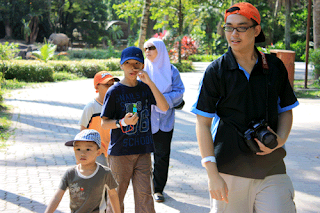 Despite a small setback and the global financial crisis, the whole family were having fun as usual. Crisis or no crisis, we managed to stride joyfully along the path learning the intricate relationship between the animals and their natural surrounding 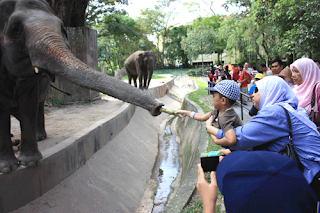 My youngest feeding the jumbo - trying his best to conquer his fear. 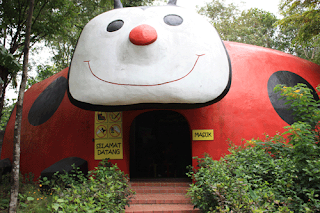 The new attraction to the visitors - the insectzoo. We didn't go inside as this will incur another charge just to see the creepy crawlies in display. The half-day walking around the compound really took away some of the spirit. 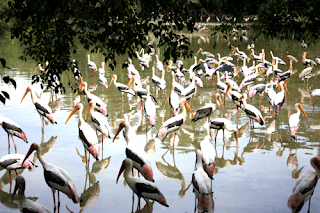 These migrating birds were the only animal that was not kept in captivity. They can come and leave anytime they like. Not a bad policy - until H5N1 knock out the entire avian population in the zoo I guess.

i've been to taiping, melaka and national zoo...and i gotta say they suck, well, compared to the zoos here in indonesia.

For the price like that, I'm not interested anymore to any of zoo in our country, it's not worth it i would say. I've saw many place which more worth it to spend our money. Maybe teh tarik sometimes? lol. :)

Alamak, that expensive ah now? My youngest is five years old. Regardless of the amount, one last trip for the whole family is a must. It's the nearest anyway...

Wah, it has been a while since I've pay a visit to National Zoo. But to be honest, I'm not a fan of caged animals. It gave me watery eyes. :(

Salam Dr Sham
I heard that our National Zoo is now living below the poverty line! The workers aren't that motivated & the animals are undernourished. Don't know how true. The zoo apparently receives only a small grant from the govt, & the number of sponsors/philanthropists, shrinking. So, the zoo has to raise its charges. But, then, this will not attract visitors. I guess when the teh ais man has to pay more rent to the zoo, he has to pass his burden to his clients! May be the govt can take a bit of its allocations for other activities here & there to improve the zoo, which I think is a good "green" project. That shot of the migrating birds is splendid! Have a nice day.

DrSam,
i agree with temuk. The higher charges occur due to high maintenance of these animals. But i am still glad u still enjoy the moments with ur family.

can we bring our own food and picnic inside?

Salam doc,
entah2 we were there on d same day..hehe..well,same as you we were shocked with d enterance fee as well,RM98 for 4 adults n 3 kids..gulp!

hey doc..zoo negara is quite near to my house ;)..gosh..how i missed this place so much..it's our fav family gathering place ;)

p/s : i think australian zoo is much interesting ;)..not to be bias..but it's the fact..animals here are really in a good shape..

gman,
The philosophy and objectives behind creating this family-oriented venue are very noble. If we read on the story of how our zoo breathed its first life, it will make us feel very proud indeed.

Skullplitter,
Long time no hear Ed. Mengeteh session is very long due...but not in the zoo.

small hiker,
Yes, that was what I thought as well. Now all my kids has the zoo experience to tell their friends. Despite the fee, the zoo itself is still one of the good place for the whole family outing.

CAHAYA,
You have soft spot for the animals CAHAYA. Good heart love tender.

Temuk,
From my last visit, the zoo management had clearly put up some effort in making the zoo more attractive. Some minor changes could be seen in term of new landscaping, new themes and new infrastructures (the buggies are all new). The intention was good but the execution didn't translate that well. Relying too much on govt support won't give any good to the zoo especially in the long run. Govt. is reducing allocation everywhere. The zoo management should be more creative in coming out with innovative ways to make the place a self-sustaining body. Putting a bigger portion of their financial burden to the visitors, I don't think is a wise step if they want to get return visits to their place. Personally I would love to see our zoo to survive and flourish well in time to come.

JohnJenin,
Inflation will swallow everything that crosses its way. Just make sure our 'hedging' is big enough not to be walloped by this monster.

Zue,
Which crocodile? Do you mean a photo of a man eating a salt-water crocodile?

IRIS,
A splendid outing for the whole family. As usual as in any exciting outing, the kids blacked-out as soon as they got themselves into the car for the journey back home.

tchersally,
Salam. Can't keep myself smiling, looking at the shocking faces of the 'terkejut badak' visitors.
You were there too?

Inah,
You must be one lucky gal. Everyday smell the sweet animals' musk and hear the tiger 'berdehem-dehem'.

jeez! that's pretty scary doc. i'd believe it too if i could see the evidence, especially a man as evidence!

what about we go for investigation? :P

Faisal Admar,
Danger lurks everywhere and may comes in any form. Just be aware and be cautious. A special CSI team for this underwater mystery sounds very interesting indeed Faisal :)

my oh my....quite expensive just to see some animals...supposedly they should just do a one time pay only and u can explore all the things in the zoo. why should they put another charge for the insect zoo? nonsense..

i think just because the zoo is one of the tourist attraction, the price is a bit higher. but that is absolutely, obviously not a good reason to "cekik darah" the locals. *sigh~

Yes, the fee to enter the zoo is quite pricey these days. One of my office mate give us a long lecture on the zoo ticket price.. apparently he is one of the "terkejut badak"...

Our zoo is dull. That's all I want to say. I don't want spending too much money only to seem tigers sleeping and crocodiles sunbath jaw opened wide. It's a mirthless environment for a zoo. I envy zoos in foreign countries like Australia home of our dear late Steve Irwin.

aShaBuLz,
I hope the zoo management can reconsider on the fee and other charges, as not to burden the visitors - locals especially.

aliff muhammad,
Salam. It seems that everybody has noticed and start to feel the heat.

Salam Dinda,
Do pat your office zoo species for me - it has been a long while since I did that hehe

Zendra-Maria,
Salam kanda. I have to learn the zen-art of zoo petting from you. hi...hi..