Ladang, here I come with songkok 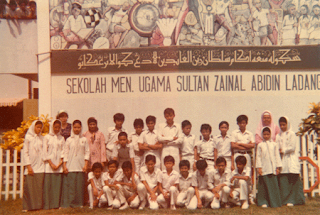 For quite sometime, I was not pretty sure how it all started. Whether it was a voice that descended down from an interstellar space commanding me to do it or was it because I was so deep drowsing in my class somehow got me to fill in the wrong application form for my secondary education endeavor. By some means, after millennium years of heavy indulgence with 'teh O beng' and copious amount of formaldehyde intoxication from eating too much keropok lekor mixed with polluted fish from our neighboring country, I realized later, it was actually my destiny. Well written long-long time ago and the ink had already dried in the luhmanfuz.
That year was 1981 and I remember how shivery cold it was those early mornings. Even it was no snow around but mind you the early dawn of monsoon season with heavy rain pouring down nonstop for days and days had really bitten deep into my bonemarrow and even my nerve too. Having to bath as early as five in the wee morning, from an open well outside the house exposed to the mercy of nature was one hair-raising experience.

Even while my exposed limbs were shivering and my goosebumps raised as tall as mount Kinabalu everytime I painfully struggled to shower with the ice-cold water, I saw from a distant flickering lights dancing in straight line along the paddy field. It was my other colleagues riding their bicycle from as far as Bkt Payong, raced patiently against time to reach our school in Ladang (Ladang is very close to the Ganu town or Kuale, unfortunately I dunno exactly how far to be frank, but it took me almost one hour to get there by bicycle from my kampung). That sight in away managed to inject some strength in me and with a hasty Suboh prayer, a quick and simple breakfast of freshly fried fish and hot sticky rice I jumped onto my bicycle and followed my other comrades of which by that time had already grown in number.

Riding a bicycle that time to the town of Ganukite was still an enjoyable activity and considerably very safe. There was hardly any racing maniac terrorizing the road or any mat rempit flaunting their antic with their underpowered kapcai around. It was heavenly serene. No pollution either except if somebody riding in front of you start to release their natural gas from the rear end. The only rival on the road was pakcik-pakcik beca riding their teksi (the local calls beca = teksi) at snail-pace speed pacing slowly and steadily to their destination.

It was funny though and shocking at the same time for me as I saw some girls registered at that school on the first day. Traditionally SMUSZA was an all boy school. I learned that was the first time the school broke the long tradition and I also later learned the reason was not because some lunatic wanted to start a new revolution for girls' power- but a nearby all girls school (Sekoloh Agama Khairiah) could not accommodate the number anymore and had to delegate some to the nearby neighboring schools. Funny thing was, after three blissful years sitting in the same classroom decoding a foreign language originating somewhere from the Arabian desert, I still could not recall any of their names. My songkok must be the reason why. You don't chat much with girls when you wear your songkok, except when you wanted to borrow their eraser. It's becoming almost like an urban legend.

The most interesting memory however, was during my journey back home. First and for no obvious reason I like our regular pit stop at one of the sugarcane stalls along the road near to Sekoloh TB (TB = Tengku Bariah). The cold and sweet sugarcane drink, probably boosted by ketum extract, during a hot day and sweaty riding trip can really uplifted our spirit. My other comrades like it too. I think we became so addicted to the extend we need have a dose on a daily basis. It was a maelstrom of lunacy after that high sugar consumption and occasionally we became a bunch of hyperactive harebrained who jumped into a nearby river (never told my parent about this) to cool ourselves off before continuing our journey back home.

The vegetation along the road of Pasir Panjang was still like a virgin jungle then and even now I can still see some greenery survived the rapid development. Whenever I passed along those small patches of bushes I couldn't help myself but smiling. Nature's call did not wait until I reach my home and the bushes is the best place to ease myself. My colleagues laughed at me every time this unstoppable urged hit me, but at the same time they felt very uncomfortable as they have to park their bikes suspiciously along the road and guarded me from unwary passerby. In some freak occasions, we fertilized the soil en masse. The local council should thank us for that. At least we saved them some budget in buying fertilizer.

That was one unforgettable experience I keep cherished even it was almost 30 years ago.

I write this story because my younger sister did ask me a question once why I went to Sekolah Arab in the first place. That one I had given the answer already. On the question of why I didn't become an Ustaz or even Ulamak after spending almost 3 + 2 years in religious school/college, that one was answered too. 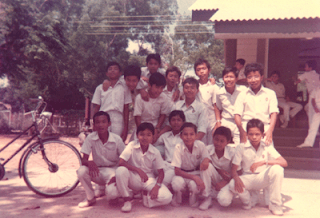 This group pose reminded me of a popular drama series during the early eighties "The misadventure of Sheriff Lobo". I was the one sitting, just like the sheriff in the drama (hey...what happened to our songkok?). Notice my trusty bicycle on the far left - still shiny and looked brand new.The good thing is, I still keep in touch with some of my comrades in this photos, even way before somebody invented Facebook. 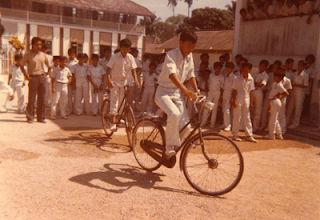 I learned the first time the meaning of inertia - a tendency of body to resist acceleration. Even though in this photo I was way in front of my colleague who was struggling to keep his balance, I bagged second in this competition as that was actually a 'basikal lambat' competition . In the background was the old hostel - now no more standing.Many sweet memories there.
Posted by DrSam at 12:09 AM

haha..i did it it too once..
can't wait for home and had to jump into some bushes for nature call..

Dino,
Did it many time. Like marking my territory. The urge become very familiar now.

nahmy,
Thank you for your encouragement and support en. nahmy. Insyaallah.

Jez to ask you something... if you became an Ustaz, wearing your songkok, will you talk to me in the first place? Hehehe...! Or it doesn't matter whether you became an Ustaz or not, the songkok will prevent you from talking to me ... just kidding!!! :-D

Such a nostalgic memory - it brings a smile though. Your uniform reminds me of those of my brothers - white shirt and pants - but both studying at different school - one in VI the other MC.

And the bicycle? Unbeatable.

Mia's Mom,
Salam. Those days, in my school, with ladies as a minority, such unwelcome gesture by simply talking to them could create a hostile situation among the thaliban - wearing songkok or not :) Some quarters considered it as a taboo...Haru betul!

Best wishes to all!

salam.. U just have a precious experience during your childhood.. Nostalgik..

entah where to find basikal tua nowadays.. One day gonna be on the museum punya wall

That's one interesting thing -- learning inertia by riding a bicycle. I'd rather run down a steep slope and stop when the whistle blows. It's much fun. Haha!

ida Athanazir,
That particular bicycle still survive until today. No more shine and functionally is till sound.