I thought when I spotted some peculiar thorny plants blooming their scaly flowers on one misty morning near my office, it was a clear sign that the legendary mighty celestial dragons would descend from their sacred altar and breath fire to dissipate the sinful disciples and lead the warriors to claim the final glory. Alas, it was however a charming dragon of the opposite sex which landed not within my deepest slumber but right in front of my face.

Many people by now would have known and believed that dragon is a powerful mystical creature that once roam our ancient time. Some ruled the sky kingdom, many lived deep in the sea abysses guarded by captain shrimps and crab generals while few roamed the earth dwelling within the helpless servants waiting to be slain by the Knight in shining armor.

How close resemblance this God-created wonderful plant to that behemoth ancient creature is not a pure coincidence. Dragon fruit presents many magical wonders to the humankind. That plants however distracted me and took away my concentration. Not to put the blame solely to that innocent plant, I missed my important appointment (it was my 10 o'clock tea break by the way) because I spent too much time taking photo and mesmerized by this beautiful being.

The plants ipso facto look very odd and out of place though. First of all, despite all the princess-style pampering by their caretaker it took almost 4 years for the plants to bloom their first flower and forever to bear the fruits. Second - aesthetically and in principle you don't grow an arid plant under a shade and shower them with plenty of water until the soil become a swamp.

This odd practice happened because, to put it simply somebody doesn't put the right thing in the right place. To make thing worst, many increasingly becoming Jack of all trades. Imagine one day to our horror my playing ground lost its elasticity and not bouncy anymore because the ground are by then will be dominated by these hard-scale dragons, oily Jatropha ,fibrous kenaf and sweet-smelled gaharu.

I hope the dragon is listening. The fruits finally dehiscence and abort.

Juvenile dragon just resurrected to become a young fearless warrior. O Dragon, do not err and stray from ill-beaten path as the ungrateful demons await in the dark to pound upon you. Summon us to fight...summon our brothers from Camelot to raise their sword and slay the monsters from the East and from the West. 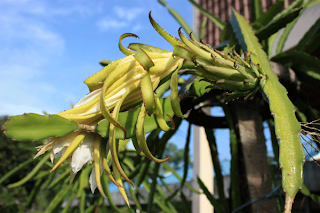 Little servants want to hear the dragons roar. But the dragons who sit high it their altar still whispering in silence. Even little hobbits won't tremble.

My hand tremble. Not in fear but in anticipation. I want to see fiery breath coming from your mouth burning our desire. Ancient mountain await your flight. 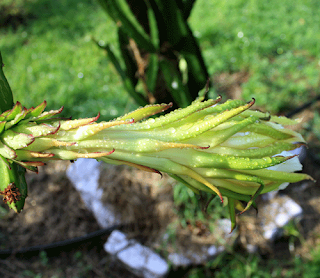 The dragon stirs once more displaying her behemoth power and enchanting beauty, but alas black sorcerers powerful spells are moving fast to cloud the dragon goodwill. We, the servant and the guardian angel of mystical God-send marvel await your command!
Posted by DrSam at 10:38 PM

Dr Sam, when I was first introduced to this fruit, i was taken to the plantation, somewhere in Nilai, i think. I was truly fascinated. I took back some - although, it would have been confiscated had the customs found them.

Initially when the fruits came here - thelocals were very cautious about eating a fruit so red. They thought there must be chemicals in it.

I love it - so refreshing !

psst, FASH has left a message for you in my blog!

geee...dragon? dungeon? armor? knight?
Is this another episode from 'MERLIN' or what?
he he he he he

i only eat pink dragon fruit. white one yucks!

Every last Wednesday of the month, we parents were invited to spend some time with our children in the nursery. In this occasion, our children will be proudly showing us what their activities were at school. So, this one particular Wednesday, it has a Fruit Tasting segment. Among the fruits is the dragon fruit.

In the map on the geographical location, dragon fruit is shown as a native to Central America & Mexico. It is called pitaya in Spanish. Do you know that the unopened buds are sometimes cooked and eaten as vegetable?

Whatever, I really love the photos! :-D

Ass-salam Doc
Hmmmm...you are full of fantasies and imaginations
...but as always...i like it.
Adios

Kak Teh,
I myself was a bit sceptical when I first saw this fruit. Knowing this fruit comes from a cactus family even make it more intriguing. But when I first drink the fruit blend, I got hooked.

psst...went and visited their boutique already. Good taste I must say.

ashley,
Actually and frankly speaking, this is just a begining of a very long episode premiering in my 'kebun getah'. this time I can't predict whether it is going to be a happpy or sad ending. I just hope for the best, especially for the actress who plays the dragon.

Mia's mom,
First time I hear that young budding is also consumed as vegy or cooked. probably a 'gulai masak lemak' with 'ikan masin' should be good combination...yes?

hazeleyed lady,
salam. Now I am wondering whether I am living in a real or fantasy world. But as long as my fantasy doesn't stray too much into the forbidden realm, I think it is still o.k.

Dr.,
From where I live in Melaka, there's a big dragon fruit plantation just 15 minutes drive away but never stopped and visit. Must do that in the future, to reminisce visiting the fruits plantation here, hehehe.

3yearshousewife,
So far there is no PYO dragon fruit farm in our Bolehland. Probably of its thorny nature not so friendly for the kids especially.

Sir Pok Deng,
Having read your comment it convinced me that I should stay away from my blog for a while if I really wanted to write a good scientific article. G\can get easily polarized here. Journal's editor might think that I am a spin doctor :)

PerantauSepi1306,
Dragon is everywhere. But Merlin is not a dragon slayer. He can only cast magic and friendly spells.