It was so contagious and I feel so kiasu 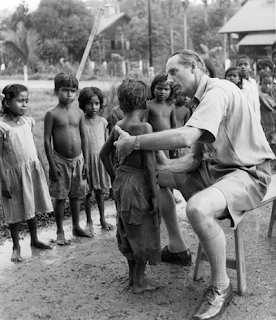 It was well documented that great influenza pandemics are sharp blades of disease that scrape masses of humanity from the earth. The influenza virus is believed to have first leaped from animals to humans a few thousand years ago, probably in southern china. The last major killer epidemic, the flu pandemic of 1918, was a unique scourge, killing more than 60 million people. That was 91 years ago and leaving a really big scar in human history.

And this week, our Southern neighbor Singapore, has reported another outbreak. Indian rojak has become a very popular subject in Kiasuland this week, simply because 2 people died of food poisoning after enjoying the food at a local rojak stall. With 137 rojak devotees became the victim of Vibrio parahaemolyticus within the span of two days, it really sends shiver through my spine as I've just come back from the island and feeling not so well. My body have succumbed with symptomatic ancient illness of running nose, light-headed, coughing and fatigue at the same time.

My wife reassured me there was nothing much to worry about. She said it was probably due to the extensive traveling I endured in a short span of time. It sound quite logical to me plus age is catching up too.

One thing about traveling, especially on a short distance flight, it requires more time getting ready than the actual traveling time. A flight to Singapore which normally takes less than an hour from KLIA, will require at least 3 hours of pre-traveling preparation. As the flight was at 8.00 a.m., I set my alarm clock at 4.15 a.m. but woke up an hour earlier and could not sleep afterward, spending time staring on the ceiling. By 6.00 a.m. I've already checked in and have to wait another 2 agonizing hours having early breakfast in the terminal - light headed. Any attempt to kill the time by gazing through a book, which I normally do was a futile one. Time really move very slowly if you constantly checking on the watch.

So this whole week I spent some interesting time visiting old friends in the Kiasuland, extracting some bugs probably exposing myself too long outdoor having dinner along the riverside and having ample of time dozing off at the airport.

Subconsciously, human is always terrified of any disease. A fear gene that is naturally encoded in our DNA. A gentle reminder from the Maker but I am recuperating well and very grateful that we are not living through an infectious-disease outbreak. Hopefully not during our temporary mortal lifespan.
Posted by DrSam at 8:40 PM

i hope you are okay, drSam.

if you have high fever, you better go for doctor. all other symptoms are neglectable if there is absence of fever.

Get well soon Dr. Sam.Hopefully the tossing and turning nites will be over soon. Corruption is incurable. Others, insyallah can be healed, can't they? Well, your significant half is right. Nothing to worry about. Have good rest and you will get better.

Get well Soon yeah!
sometimes illness comes from our unconscious mind..if we think we are healthy, then we are and we will..

gman,
alhamdulillah, the temperature is normal. Thank you for prognosis doc.

Teacher
Thank you madam. Yes, there is many diseases that is incurable and hard to deal with.

Al-Mualim Shah @ Dino,
Staying in the subconscious mind for quite some time. A periodic reminder from the Maker is sometime good.

Salam,
dr Sam..hopefully you'll recover soon...
aiseh man..my hubby went to Singapore yesterday and probably will come back tomorrow.
I don't want him to 'catch' any 'KUMAN'. I don't want another OUTBREAK in my house..tolooonggg la. Nauzbillah!

Hi Sam! It's less than 2 weeks ago when you advised me to take a lot of 100 plus to fight over my "bacterial" fever. Anyway, I am glad that you are recuperating well. Have a good rest, Bro!

mizzy N
emmm...gap year. That is the term.

ashley,
Pray and hope for the best and no foreign 'KUMAN' will ever invade our home sweet home.

Mia's Mom,
Once in a blue moon, our body needs some sort of natural cleansing I guess.

Are you fully recovered now?

patungcendana,
bila baca soalan kamu, teringat satu poster iklan di sana. "I am okay, you are okay, We Singaporean are all okay"

Get well soon DrSam and have a nice trip to Kiasuland (as you put it)!

anyway, do take a good care of what u're eating..hygiene is the ultimate factor if u're travelling..

Almost everyone is under the weather nowadays.

But I'm glad that you're feeling better now. Hope for your speedy recovery soonest.

My children & hubby still being given with a spoonful honey each day & so far it has helped a great deal.

I like the way you see it each time you are not feeling well - gentle reminder from our Maker.

diner along the riverside? that sounds cool. dim lights too? hm hm. i like cozy place like that.

did you eat indian rojak there? :) i heard its popular... but no idea how it is like... penang rojak and kl rojak is different you know?

kl rojak is what we called pasembur here.

Get well soon Doc..!!Have ample of rest n drink a lot of water..

there U go, U've got less to answer in the afterlife, eh?

u know what else is contagious??

As old folks say, drown a cold and feed a fever. Drink plenty of water and don't forget to eat. Plus some gentle head and shoulder massage from the other half, you'll recover in no time, insya Allah.

I am new here.

I am prone to flu and all. Perhaps it is due to work stress. I hope.

It is good to know that you are recuperating. Take care, sir.

demam jugak doc? I just recovered from one myself. take care, ya...

Hi doc,
Hope u re feeling better by now.My daughter was also sick.Her friend called me to pick her up from hostel.She couldnt even get up and walk on her own.Lucky she has many good friends there, just like sisters, to help her get into the car.I just sent her back today after nursing her for three days.And you know what the friends said..their class was so quiet because the chatterbox was not around.Rupanya baru lah I tahu yg my daughter to paling bising dlm kelas...
Take care doc, n drink lots of water.

Nowaday's many things are dangerous outthere? Becareful with what you eat.

penjenayah.merah.jambu
so far so good. TQ

Inah,
You are right. Have to be careful of what we eat, especially when we are in the strange land.

MariaFaizal,
I don't mind we, the adult to take the punishment. But pity when we see our kids and the small ones suffering.

My wife uses the same lemon and honey combination to relief coughing. It works very well.


FaizalAdmar
The subtle ambiance along the Riverside and nice view of people boating/cruising would've cheered me up, but alas I was almost shivering and in no mood even to laugh from my friends' dry jokes.

When I read the news, I stayed away from the stalls. But visited the famous Hj. Ashahari Nasi Padang in Jurong. Spent 20 minutes Queuing but it's worth. I think it is true when people Q, then it must be very good.

get full recovery Dr.Sam.
have a nice day!

tchersally
Glad that your after effect has finally ceased!

VersedAnggerik
Yes you're right. A timely reminder to sit back and to reflect on whatever wrongdoings and ask forgiveness from Al-Mu'id.

Ida Athanazir
sometimes I yawn in the meeting, hoping others will yawn as well :)

Smile should should have the same effect as well.


Zendra,
thank you for the nice tip. I have been pampered well by my significant half and don't mind suffering a little bit longer (with that first class treatment) :)

Your flu antibody must be very strong by now :)

I hope you enjoy being in a new place, new environment and new people (private school?). But I am sure, teaching is really close to your heart and shouldn't worried you too much.


mad redo1
My immune system need to refresh and got updated with a new version of antivirus.

madam gold
thank you. Glad to hear your daughter is recovering well. Having a really caring mother like you must have huge 'curing' impact on her health condition.

Your daughter is a chatterbox? I can imagine, her class mates sure to miss her very much. My first son is also a chatterbox. Wonder where he got that gene from. Surely not from me ;)

sailormoon,
Thank you. Many wolfs and vermins out there lurking for its preys too. Have to make sure not to let our guard down.

meEn,
Thank you. Still 'hutang' you mengeteh at Titiwangsa ;)

"Indian rojak has become a very popular subject in Kiasuland this week, simply because 2 people died of food poisoning after enjoying the food at a local rojak stall."

How r u today doc?? Feeling much better i hope..

Ay, no truer words doc.. age is catching up... I'm just so tired sometimes I just hit the sack as soon as I got home. It's not what it used to be and I'm getting grumpier and complains a lot too...haha. No siree, I'm not gonna be like one of those old man... hehe :)

Pak Karamu reading and visiting you

tchersally
The bad bug is much stronger and resilient this time I guess and taking longer time to flush out from the system. I am feeling better now. Thanks.

PakKaramu,
Thank you PakKaramu. Bloghopping to your place - on and off, but did not leace my trace :)

Faisal Admar,
nasi kandar beratur... where is the place?

I've suffered that a few days ago. its takes some time to be fully recovered. as precautionary, i head to the clinic and got the influenza vaccination... just getting ready for the winter...hehe!