Living under the same sun

Everything seems to be very quiet in our neighborhood lately. I hardly see my fellow law-abiding citizen jog in the morning or busy-body maids gossiping with each other about their stingy lady bosses. Even Samantha, a petite blonde living next door became very agitated with the serene surrounding . She will moan and whine on anything that suddenly disrupted her afternoon nap. A hunky postman doing his usual business will really piss her off. A real bitch she is. Samantha is the only dog in the vicinity. She barks at anything that passed in front her gate. Loneliness has really got into her. Though she is such a bimbo, a real stud is hard to come these days. Not while she is confined in her comfort zone. But I believe even a spoil brat like Samantha will be a good sire one day.

And thank you to our Bolehland weather, it is summer again. The blazing heat, skin-biting UV, air pollution, head-banging deadlines and traffic jam has worsen the situation and really shrunk our lifespan (into half) as compared to our own species in the northern and southern hemisphere, who has the privilege living in the fridge. But who are we to complain? With mamak and tom yum stalls around the corners that operate 24/7, all year round. It is a fiesta!

Back in my neighborhood, I have a different story to tell. In order to kill the boredom and to fulfill our social obligation, my fellow law-abiding citizen who shares the same 'lorong' with me decided to have our annual communal gathering, while at the same time celebrating the labour day holiday together - pot-luck style. The truth is, we have been engaging in this healthy activities ever since we moved in into this neighborhood seven years ago. The idea was initially mooted by me (ehem...ehem) thinking that by knowing my fellow law-abiding citizen better would allow me in the future to borrow their grass cutter or even their posh car in case of an emergency. And not surprisingly, whoever came up with any good idea will almost unanimously be selected as a leader, in this case the chairman of the 'lorong' of course. (I noticed these has become a common practice in the government sector, no wonder why not so many good and constructive ideas being put forward these days :)

With 44 houses in the 'lorong' and very supportive law-abiding citizen, the venue will be rotated among us. The chairman has the honor to choose which house to become the host. I was the first, in fact the second and the third to host such an event, that if my memory still serves me right. In a way, this gathering has also served as a testing ground for budding cook to show off their cooking skill. This has left the men, who oblige willingly to succumb themselves indulging with all the food they can stuff into their belly. The gathering has become a tradition and I hope the tradition will continue.

But strange it may seem, in all of those occasions, we somehow have never invited the blondie Samantha to join the fun. 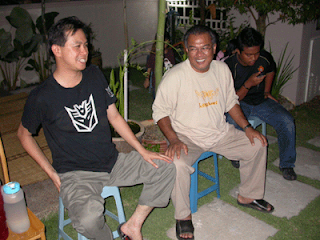 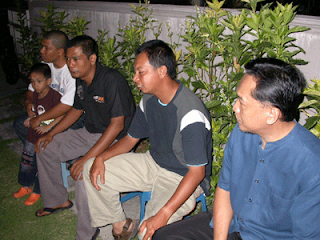 Ice-breaking session after the opening speech has left our bilal (in the middle) gasping for breath to recite a 'doa makan'. 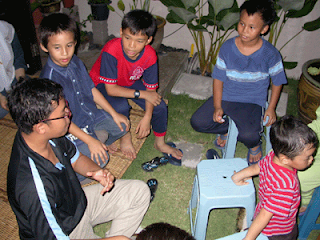 Kids are having their good time as well. 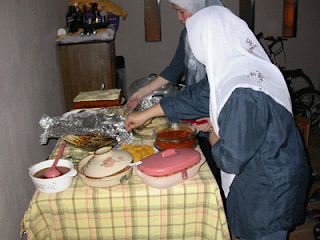 After an inspiring speech by our host and a short doa recital by our bilal, the ladies made themselves busy preparing the feast. 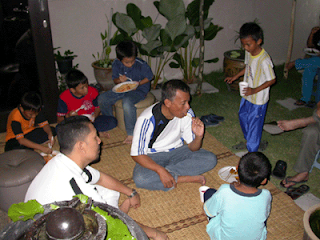 Oblivious to the heavy discussion that almost rival the parliament around him, one of the law-abiding citizen helping himself with satay kajang, courtesy of our bilal. 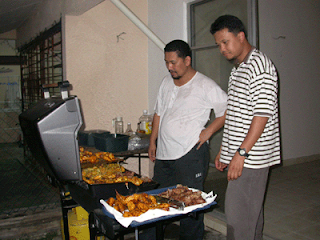 Archive of time - members of the community deeply engrossed discussing the current affair - mostly rubbish but rather very entertaining. 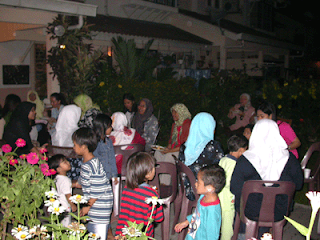 Archive of time - the ladies, with enough corum to vote and send in their representative in the next general election. 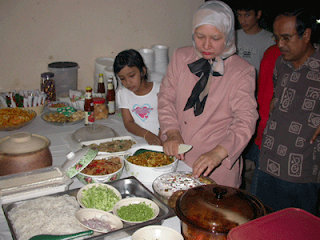 Archive of time - our prolific and outstanding chef, checking to make sure the foods were not contaminated by straying saliva from a heavy discussion nearby.

Email ThisBlogThis!Share to TwitterShare to FacebookShare to Pinterest
Labels: walking under the same moon

can the accumulated food for thought that night rival the debates in parliament or any dewan rakyat :-P?

mizzyN,
with mouth full of food, the only thing coming out was rubbish - that part rival the debate in parliament or dewan rakyat :)

never taste satey kajang before? which part of the planet are you from sis?

the foods looks very appetizing..
this reminds me to organize up a bbq for my housemates too..hehe..

here's to them underneath the burning sun...

Yum, yum...
I saw 'barbequed' satay there.. :D
Me loike anything carbon even capsicum..hihi...

The street party looked so merry & i know i don't live around the neigbourhood, but i just wished i was there with you guys and Samantha (the only bitch that we can call bitch in a cute way :)

And...together indulging in those yummy food!One more thing Doc, is there anyway I could purchase the fruity soap (that given by sis Zayda)?

Have a happy day!

hey, that`s me in the 3rd picture (the red shirt boy with a watch)

Meriah sungguh neighborhood DrSam. This value need to be maintain because people nowadays too busy to know their neighbor and very anti social.

Doc,
such a great activity among neighbours..muafakat membawa berkat..

it's fun to have gatherings or parties like this every once in a while. give us chance to catch up with our friends. :)

mizzyN,
Welcome to the Bolehland!

Dino,
The food and the good company are always very appetizing.

patungcendana,
walking under the hot sun, wearing a yellow hat...shouldn't be confused by now.

MariaFaizal,
We could make another arrangement for you and other bloggers to have a BBQ gathering - and that sounds like a plan already.

We got the soap whenever we attended our regular Saturday's kuliah. They sells many other halal products as well. There are several varieties. Will get for you another one.

atromen,
atromen should be doing his homework at this hour.

JIVEBUMZ,
salam and have a nice day.

madam markonah,
Always nice to have good company. You missed the first and second bloggers' meeting (in March), but if there is good response, why not... a BBQ gathering sounds good.

November,
Twice a year should be good to catch up with neighbours. Try to organise one at your neighbourhood. I am sure everybody will enjoy it.


Mia's mom,
He..he..I know you are one law-abiding citizen. Neighbor angkat shouldn't be any problem. Can join next time.

Alhamdulliah..such a good noble spirit still exists in the city and should be preserved and passed down to the next generation.
Semuga niat dan kerja -kerja ini diberkati Allah...

BBQ at PCB eh..yup would b great indeed..infact that nite we did have a BBQ ..and yes d sea 'creature' there are fresh!!..so..bila nak mai?

Give me the details of the prices. Let me pay you PLEASE..... and this time i don't just want ONE, I want more as the soap is really great.Honestly!

Email me Doc? Thanks in advance.

under the same sun

madam gold,
Yes, I agree ma'am. This spirit of 'main pondok-pondok' should be passed down to our next apprentices.

tchersally,
you did? Jolly good! Yes, we will find one good day, when the moon is full and I will call you then.

MariaFaizal,
Pas de probleme! Will email you the details. I am sure the Ustaz would be very happy to have another customer like you :)

patungcendana,
the Mean, Mode and Median. or was it Depeche mode?

Hello...
Sound interesting ur blog...
Next time called me up if there is any event like this,k...:)

Mak bapak Samantha pun xde ke? One thing I learnt from experience is to always prepare something filling for vegetarians too. True it's potluck but not nice if they have to eat back their own stuff, kan?

Kudos to your efforts, Doc.

You are right. We should be considerate and thoughtful when preparing our food especially when it involves many people with different diet. But in our case, there is non herbivore but all omnivores!

You have good neighbours there. It is a good tradition to keep, this makan gathering.

I look forward to you organizing a bloggers BBQ gathering. If the timing is right, I try my best to join.

If you are interested and many others have the same liking, then we should have one. Why not sir.

Indeed a good practice, eh Dr Sam.. We also had it once a year in order to bond and catch up accordingly ;D

Tantalising idea indeed to BBQ under the moon but it is so hot nowadays even the night can do so little to cool off the day heat, kan.

PerancauSepi1306,
Hope many other law-abiding citizen would do the same.

we have to wait until the next full moon or Malaysian Winter to come, then we will have our BBQ.

I missed the tea so much! :P

CAHAYA,
Come again, you are most welcome!

Hmmm.. most of the pot luck yang ada semua initiatied by the office.. tak pernah lagi attend from the neighbourhood..

Syabas DrSam and all your law abiding friends / neighbour..

Yosh... i miss this kind of event
Yup my "lorong" also did the same thing...
Keep up a great move !
Sepakat bawa berkat!

payarumput21,
law-abiding citizen really looking forward to have such gathering. You can be the one who make this thing happen in your neighbourhood.

zafi,
I am sure you have a 'lorong' ala "Coronation street" at your place. A very happening street indeed.

hahaha... bro memang pandai buat lawak. ex law abiding citizen went to another neighbourhood coz your food had everyting in it but no power and money bro... you are happy he went i guess.... jeng..jeng..jeng...jeng.....