A restless soul, feasting to my eyes

This whole week, life was not that bored after all. My diary was full with meetings, which was quite unconventionall for me. Despite the periodic and scheduled meetings that I had to attend, there were also quite a number of unexpected meetings that really bogged me down with the unnecessary nitty gritty bit, of which normally shrinks my brain into a pea size. I am very surprised to see many meeting nowadays can drag on and on until the wee hours and the people can still talk like there is no tomorrow, and the minute of the meeting hardly finished the last line on a piece of paper.

I have not yet subjected myself to a very strict regime of diet, but I am quite sure this week alone has contributed a lot in adding up a few kilos into my body weight. I supposed the normal practice to serve calorie-laden pastries and caffeinated drinks during the meeting need to be seriously considered. No wonder government officers nowadays could not keep up with the ideal BMI (Body mass index).

Having spent many hours warming the seat in the cold meeting rooms, and got caught in the traffic jam, I really missed my serene and sedated life in my office. I hardly had enough time to join my normal corum in the cafeteria for a round of serious discussion on national issues, like why most Malaysian government servants wanted to extend their retirement age until they can't even remember their own age, whereas they can retire early and spend their remaining mortal life repenting for their past sins in Gua Tempurung, for example. What more on politics. If any of my colleagues ask me now, who is the current MB of Perak, I wouldn't know or tell for sure. I hardly read any newspapers these days. The only program I watched is 'House'.

Despite the heavy schedule and after spending numerous hours gazing through photos and micrographs, which were compiled for the past few weeks, I decided to treat my eyes on other subject that wouldn't strain my iris as much, thus inhibited my eyes from becoming more 'sepet'. After all, I need to thaw back my brain into its normal size. Coincidentally, my colleagues told me that there are few interesting exhibition being showcased in the University of Malaya. The one that I am interested to see was by an artist from South Korea, Prof. Mi Jai Lee. Jolly good I thought, I must go!

I however missed the opening ceremony and also the beautiful gamelan performance, a traditional musical ensemble played by my friend. I can't remember when was the last time I listen to the sound of gong, angklung and other peculiar musical instruments. The exhibition entitled "the '25th. Solo Exhibition - Celebrate Transition from Traditional to Digital Art"
was a good one, even though there was not much artifacts on display. At least the tour around the museum had put some perspective back into my life and burned up few grams of calories in my body. 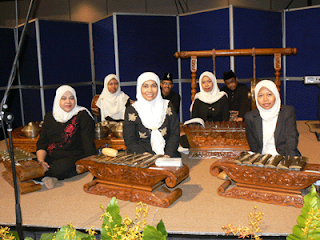 My colleague with her team getting ready for their gamelan performance during the opening ceremony. photo courtesy of my friend (middle in the front row).

This blur image of the opening ceremony has proven my long suspicion that Parkinson's syndrome has somehow has a very strong connection with the quality of each photo. Never ask your friend with known disease to shot for you at any important event. This photo courtesy of a budding cameraman who wants to remain unidentified, using my colleague camera while she was getting ready to perform the gamelan.

salam...owh...meeting perkara yg sungguh tak suka and with my condition, after 1 hr, my back will give the strong signal...move ur ass!!!! or else i need a pain killer.

arsaili,
we are in the same boat bro. The back problem is sometimes a blessing in disguise also. I had in many occasions excuse myself from the meeting using my back problem.

Hmmm..no wonder we hardly see u around lately..

'Meetingolics' is probably a new disease crops in..

There were time that I loved to be in the meeting, just to day-dream (got away from work pressure for a while :)

P/S: Thank you so much for delivering the soaps right to my door. You guys were so lucky you did not see my face with thick bedak sejuk just now,haha...

Regards to Sis Zayda & lovely children.Thanks again for the free sample of the green soap.so far the orange one has worked wonders to my skin.I'm delighted!Faizal says 'hi' too! :D

sometime I sleep in meetings....

Hi doc! Meetings??? Teacher s meetings can sometimes can go until 4-5:00 in the evening, and you guys are lucky to have donuts and coffee.Kita orng lepas meeting biasanya kebuluran...nothing served.

thank you for the wish...

Your schedule looks tight! That explain your absent from blogging world. :)

Doc, the moment I retired and thus stopped having nescafe and 2 kuih manis at every meeting pagi dan petang, I lost 5 kg. in weight. Yeah, and I don't miss meetings at all ever :-D

MariaFaizal,
some of the meeting will end up without any decision at all, that is after a long monologue by a chairman. Yes, some members even fall asleep in the meeting and have their own sweet dream.


No problemo. We purposely gatecrashed to your house in hoping to catch you in one of your "uncompromising situation" :) almost got a glimpse of you in your weekend 'bedak sejuk'!

Hi to Faizal too.

madam gold,
still considered acceptable if the meeting finishes before dusk, but if you have to stay back in the meeting until past the midnight, I think that is madness.

CAHAYA,
Will find a sanctuary to detoxify myself soon. A get together BBQ would be nice too :)

Zendra,
Haaa...haa...a cuppa and yes exactly 2 kuih manis at every meeting (wonder why 2 kuih and not 3 or 4) are really bad for our health. Good for you ma'am.

Hey wait da minute. that's mean if I can find all the good excuses not to attend the meeting, I can have my ideal BMI in no time yeah :)

hehehheheh
i hate meeting actually but what to do... its a must in every organization! oh id love gamelan n cak lempong stuff! :P

zafi,
everything that is done in excess, is something that I despise.

The most time I spent in meetings was when I was in government service. Sampai jadi expert amik minit mesyuarat.

I still hold meetings now but basically as a means to check progress. If I chair meetings, I limit them to 1.5 hours max.

Oldstock,
Same rule applies to me. 1.5 to 2 hours is the max time. More than that, mostly rubbish.

mizzyN,
some couldn't adapt to the changes.

Memang feningskan kalo byk meeting.. uggghhhh stressful if too many issues so for me, 30mins is enuff... straight to the point, issue, cause, solution and next action then finito... nak bukak hikayat lepas the end oklah ;p