Temporarily out of touch

During one of my soul searching endeavors many years ago I found out, good ideas don't come everyday and readily plucked out from nowhere. It may suddenly fall, pouring down from the sky in the middle of whatever imaginable we are doing. The idea may comes while we are sitting on a deserted beach, under a palm tree watching the vast horizon, or while cooking our favorite meals in the newly renovated kitchen or even in the middle of heated discussion with our boss on on just a trivial matter. Or we may digest the whole volume of Encyclopaedia Britannica and try to swallow every single word written on it, and the only creative idea flashing in our mind was how to shut somebody's really big mouth while at the same time trying to save ours from doing the same.

Incidentally, I have also developed a rather peculiar self-preference since the first time I was introduced to a 386 and WordStar4.0 many years back. I don't know about you guys, I found my ideas flow flawlessly and faster if I type rather than trying to scribble them on a piece of paper. It seems the microprocessor inside my brain (most probably yours too) works super duper fast, at a fraction of milliseconds presumably, the muscle and quick reflexes of my hand is relatively a mere sloth and just could not match with the speedy flow of brain nerves.

In ordinary and normal folk like us, fortunately this brain-muscle type of relationship works with harmony. Obviously we don't want this complicated balance become disrupted. As I also noticed quite a few of our own kind, which in most cases is quite rare, seem to suffer from the speech-abnormality syndrome - you talk first then only you think. The muscle and reflexes work faster than the brain. In a layman term this would fit into a term called 'mulut tempayan'. Luckily it is quite curable. If this unlucky individual live during the legendary Megat Panji Alam era, a hard slap on the face would easily do. 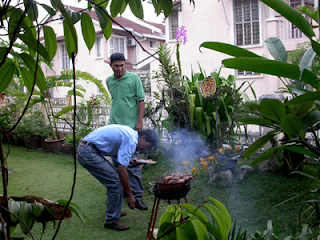 After some heavy raining for the past few days and upon checking that the Air Pollution index in Shah Alam reported to be of a moderate scale and quite tolerable by the sun seekers, I decided to invite my staffs and few colleagues to join me having a BBQ. It has been a while since the last time we had a BBQ and the students' last day of which attached to my place since a couple of months ago seems a good reason to unpack the BBQ set and set it on fire. 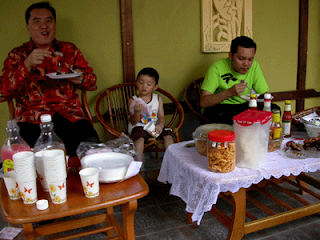 I have no idea whatever they are thinking but it seems everybody, big and small are enjoying their simple dishes. With a striking pose that resemble a praying mantis in one of his favourite Kung Fu film, Brother Jon (wearing the compulsary Thursday-batik attire) looks like he had just hit a bright idea and ready to share with other. Voila! 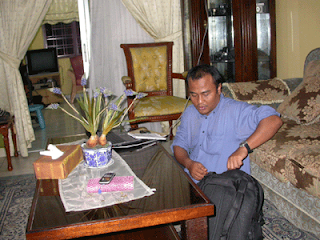 Despite the many calling to this service provider calling center and following the instruction from the different operators each time we called them, the problem could never being solved. No harm and no heart feeling of course. That is what the call center is for in the first place- a center for you to call and get acquaintance with or having intimate chat with a stranger at the other end of the line (obviously this has nothing to do with a blogger friend who live in Bandar Utama :). Luckily this good samaritan, an IT genius who knows precisely the different between the LAN and the WAN, had saved our days and got us hooked back into the cyberworld. Thanks a zillion mate!
Posted by DrSam at 2:20 AM

Oh, I prefer the old-fashion way--pen and paper. I'm a dyslexic, but I love the feeling of scribbling words on a paper (nevermind my spellings and handwriting!).

i prefer both because my word processer demo version has expired. typing in notepad/wordpad is penat without the automatic formatting.

about the mulut tempayan thingy, i try to shut my mouth more often now as lidah tak bertulang. hihihi. like the mat salleh sayings go, "if you can't say anything nice, say nothing at all." not that i am a mulut tempayan.

I prefer traditional ways. I love to write and scribbling it on papers. I love mind mapping too. I guess that differentiate woman and man when it comes to scribbling notes during classes or discussions, and meetings too.

I'm sorry for your bad experience over the technical faulty and the numerous attempt that you did to get you back on net. I did experience the same too when I used that 'service'. Hehe.

Call-center operators are the front-liners. But some front-liners just do it for the sake of pay. No pun intended. But it's the truth. They don't have the passion to 'serve' or really 'helping'. That explain why they asked you to do this and that for hundreds times. They supposed to send help (real help) at 2nd time you called already. Some problems are meant to be solved face-to-face.

Glad you're back at last. I think we might have the same tendency to type down all the notes in a reliable electronic device. I wasn't an adept conventional note writer on a piece of a traditional paper. It might seem good and fancy (with all the italicized handwriting like an ancient English manuscript), but nothing beats the speed of electronic wonder.

Speaking about 'mulut tempayan' I'm not a part of it. But my other muscles work faster than the brain neuron (put aside any scientific facts regarding the nerve system).

Have a nice day, doc.

DrSam, i still prefer to jot down on my little black book. i never experience 386 or Wordstar4.0 since i couldn't afford computer during my school day. i only start to use computer regularly when i enter universiti which i bought using PTPTN. hehehe

tchersally,
A mere IT glitche could disrupted the whole week and send me into a total darkness. Thanks God everything is back in order.

Glad to hear from you too and have a nice weekend.

Si Penconteng,
Probably too much dependence on the keyboard, my writing skill has not developed much over time. Funny thing is, In some odd occasions, I could not even read my own scribble :)

mizzyN,
Demo version :) Probably somebody in Low Yatt can help you.

Yes, the best way is to shut up.

CAHAYA,
I have a friend during my varsity days, his handwriting was so good, so unique and really nice to see. He is a left handed.

I am sure you are really good and fully appreciate what you are doing now and this showed when you stick to your current job despite a hard-to-resist offer recently.

Sir Pok Deng,
Thank you sir. Yes, My fascination over electronic devices these many years and over dependency to them has caused me to loose some of my artistic talent. When it comes to writing, the brain seems to shut down automatically on me!

Errr...which part of your muscles you are referring to sir?

Have a great weekend to you.

JohnJenin,
That 386 was my first computer when I was in my final year. I have to break all my 'tabung' and damaged my ASB account to an almost zero in balance, plus a big chunk of help from FAMA to buy it those days. (Mach 3 and prince of persia was my favorite game that time :)

I'm very loyal DrSam. And it doesn't applies only to work related. Haha.

I didn't say that all men sucks in handwriting. But most of them does. :)

have the same problems with my connection almost everyday..
huhu..nk internet pown susah

wooo BBQ is so nice... How alluring...
wordstar? hahahha ive used it when i was at standard 4... ages... :) but very powerful during that time!
have a nice day!

Yo bro.... How's life been treating you?

CAHAYA,
Good trait in you CAHAYA. many would love to have you as their friend.

Dino,
If the problem persist, you should consider switching to another ISP.

zafi,
Summer is a good time to have a BBQ with friends and family. Have a nice day to you too.

hidup KOKA,
So far so good bro...still live and kicking.

bbq is the best way get closer between friends and family.
:)

shaifulsafar,
Hi there. I read ur blog. wishing you all the best.