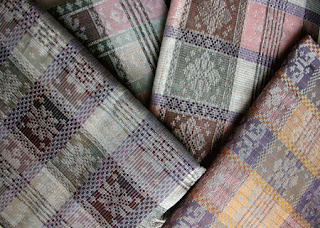 Few days back, I called Che' (my mom) at my hometown Kuala Trengganu, the land of keropok lekor. My nephew answered the phone and he told me that Che' was very busy at her kitchen preparing a big feast for the masjid. I was told later the feast was for a special occasion in this holy month, in Ganuspeak we called it 'malam namat' with the sabdu at the alphabet of 'm'.

Again, 'mlam namat' brought back many fond memories for me. As we used to enjoy 'malam namat' with all the special and exotic gastronomical delicacies at the masjid, which happens only once a year in this holy month of Ramadhan. 'Gulai itek sekati' and 'khesek' are the most anticipated dishes. But something stuck at the back of my mind and this has really puzzled me. Until now, frankly speaking (and shame on me), I am not sure what 'malam namat' is. I don't have the gut to call my father and ask him what 'malam namat' really is.

The prospect of having reprehensible conversation with him, has led me to call my younger sister instead , Cendawanintim (who was with Che' doing the same kitchen chores) for some clarification.It turn out that 'malam namat' is actually 'malam penamat' or the day to mark the 'khatam' of 30 juzuk of Al-quran, recited from the first day of Ramadhan by the qariah at the masjid. My younger sister told me later that my kampung is among the first to finish (khatam). Bravo and Alhamdulillah.

This afternoon I received a package from a courier service. It was from my Che'. It was a special order from me earlier for the big day. As Che' is also probably the last remaining traditional Ganu Songket weaver, I have the privilege to choose the 'songket' to match with this years color theme. They are for the request and order from my colleagues as well.

I called her again today to inform that the consignment has safely arrived. Again she was very occupied with my other nephews, in her kitchen preparing and cooking a long list of local saliva-dripping kuih, and some are my favourite traditional kuih-muih. Sekaya, koleh kacang, koleh lemok, beker nyor, kuih telinga lembik, kuih bakor, nekbat, kuih tepung bunga, kuih golek abu, tok aji serban, akok and belede. Ahhhhhh.....neleh air liur :)
Posted by DrSam at 2:44 PM

aaah, malang namat! i had to read that a few times to understand it.

Salam
Waw...i am sure not only your mum...
your 'kampung'too has a great influence in you...
You should be proud to be anakganu.

Salam
Next time...elaborate more on kuih telinga lembek"...
or i dare not eat...hahaha

This is the first time I read the phrase "malam namat" pondering for moment then yeah, it is khatam al-quran night! Oh, your adik is a blogger too. I think met her before...

Ah...for the kueh, I'm going back to Kelantan this hari raya Doc...Hope to stumble upon some of it.

Wow! Your mother is a songket weaver! That's great. Is there any of your sibling inherit the craft?

this is the first time i read about malam namat. thanks for sharing dr.

Kak Teh,
Hi...hi...I have to call several of my siblings and close friends to get the true meaning of that pharase :)

You and Abang AG are doing great in the far land in making the Ramadhan very much lively.

madam gold,
now that you are reminding me, I have to speed up the pace more. Same boat here. Hope our spirit is still high as ever.

hazeleyed,
Salam. I missed my kampung because I didn't really spend much there. Not until my adolescence year. We lead a nomadic life (father's official job) since I was small.

Kuih telinga lembik was also known as kuih tahi telinga with the inti in between the flabby pieces :)

aliff muhammad,
Salam en. aliff. My sister blogged earlier than me. Stumbled upon her blog not long after I started to blog. Good that you've met her.

Kelate has many interesting traditional kuih-muih as well. Have a save journey back to your kampung.

unfortunately, none of my sibglings, even the ones who are staying in KT learned the secret of the trade. Not that I know.

Wow... your mom's a songket weaver ye. I've always wanted to see a real traditional weaver in action. Maybe i can drop by your mom's place next time I get the chance to go to KT.

Oldstock,
Salam. My mom always like to have visitors like you. Even if not for the songket, you will be treat with yummilicious traditional Ganu dishes :) The place is not very far from the Floating mosques.