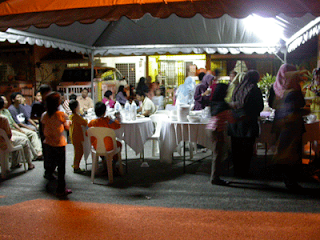 It was this time of the year when the full moon obscured by the monsoon cloud overhead. My fellow law-abiding citizen in my neighborhood felt that we should once again get together to unwind ourselves and ease our mind a bit from the post-budgetary syndrome. I thought that was a great idea and great ideas shouldn't just be left idle on a dusty shelf. With that in mind, last weekend we all packed our food and left the kitchen with a handful of mouth watering and delectable foods, erected a big tent on the street, sitting packed together under the cloudy sky, munching and laughing until the first morning dew started to settle on the grass.

That was actually the second community-get-together gathering by the law-abiding citizen residing along the street this year. Actually that gathering was planned and meant for the Raya of which we would normally held it in the month of Syawal. But we had a consensus to have the annual event out of the norm as we wanted everybody if not all to have the chance to attend this special congregation. Living in a rather big community especially with multitude of backgrounds, political believes, religion and personal taste, a consensus is very important. At least we managed to decide and agreed upon on who should be in-charge of looking after and manned the teh tarik section.

As usual at the end of the night, everybody was very happy and well stuffed like a reticulated python after the night hunt. This gathering has undoubtedly brought us even closer to each other. Our next food-chomping meeting is scheduled to be on the first quarter of next year, with more interesting activities and a very interesting theme - "You bring your food, we'll finish them all". 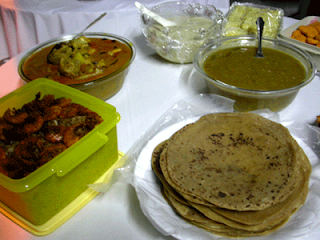 This was the first time this chapati made its first appearance in our meeting and straight away become very popular and a star choice among the street dwellers. So popular I didn't have a chance to get a taste of it and it was gone the moment I went around the table for the second helping. Kudos to the chapati and its chef! 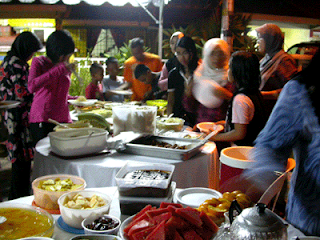 Food was never a problem and in a colorful abundance but I had a problem in making up my mind on what to consume. My gastrointestinal system is still adjusting to all the temptation and my normal cardinal diet. 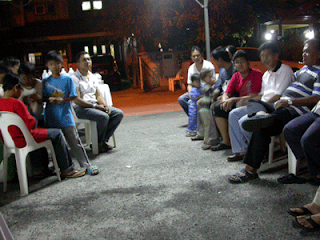 Law-abiding citizen waiting eagerly and patiently for the organizer to make an opening/welcoming speech. As there was no eminent sign of by-election looming in our neighborhood, except probably in Batu constituency of which we are not quite sure when, a short (makan) doa reciting was suffice enough to start the ball rolling. 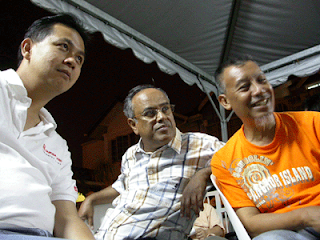 Joke of the day left our members feeling ticklish but some were not amused at all Or probably didn't understand what the other member was mumbling and rambling about. 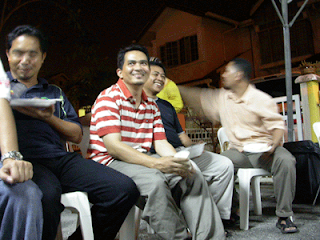 Law-abiding citizen it their comical mode. There was one caution though, don't laugh while your mouth is still munching and full with potentially face splattering food geyser. 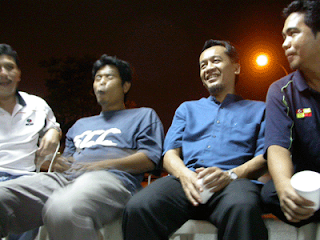 so great having that kind of neighborhood. even kat kampung pun kadang2 tak macam ni ^.^

where is this? it's a good neighborhood you live in. it's very difficult for some of us to have maken2 like that in a multi-racial community...

caption bawah tu is the very good one :P

Such a lovely neighbourhood we have here. And nice chappatis too! Very the 1 Malaysia lah.

salamz bro
the food looks so tempting and alluring
the gathering moments is unforgettable!

salam drSam,
lame rasenye xjenguk cni..
quite been bz with lot of work..

Meet another group of law abiding citizen this coming saturday, okay?
he he he

Small Hiker,
These law-abiding-citizen reside in a remote part of the planet sharing the border with Kg. Paya Jaras. Thus the kampung spirit is very strong.

Sir Pok Deng,
I dunno about 1Malaysia but yes you are right the chappati really did bring the spirit out (even though there is no Indian living on our street).

zafi,
Salam zafi. The food is always a good starter for a good communal comradeship.

CAHAYA,
High-class and high taste neighborhood kot Cahaya. No worry. Next gathering you can join us if you want to.

Wow, what a wonderful street to live in. You're one lucky neighbour.

3yearshousewife,
Yes, indeed. I am hoping others are sharing the same spirit.

doc, why do you call them law-abiding? in what term to be exact? :)

Faisal Admar,
These law-abiding citizen of my street, abide to the rule religiously and never break any law that was created by the mankind (except probably missed to pay monthly fee to our security guard). BTW, Your type of question reminded me of the time when I was sitting for my viva :)