The Lake Club rendezvous - in person 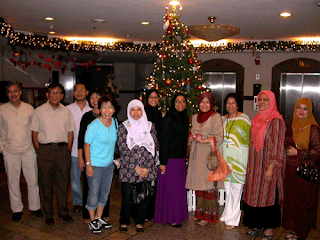 It was a very pleasant evening, meeting fine people previously I got to know and used to 'talk' only in the blogosphere. It all started when I called Kak Teh to fix a 'mengeteh session' with her and her husband, Abang Wan Hulaimi (notably known as Awang Goneng in the blogosphere). Both of them happened to be in town for a short break and some official engagements. She instead invited me on behalf of another ardent blogger, Kak Puteri for a small dinner gathering at the Lake club.

Few amusing surprises awaited me during the meeting. Having no prior knowledge on who else to expect (except Kak Teh, Puteri and their partners of course) meeting other interesting bloggers and none bloggers was a very enlightening experience. NanaDJ was a mysterious lady who doesn't have a blog (as yet I supposed, not sure what will trigger her to start sharing in the blgosphere - probably a bowl of steaming mee jawa will do :) but a regular visitor to my blog. Others are a sort of cat and mouse type of relationship. I from time to time stumbled upon Oli's, mostly from Kak Teh's. A silent reader to Puteri's and I read comments by Yani in Kak Teh's blog but never have gut to say something in hers (Yani's , Oli's and Puteri's). That actually goes to Awang Goneng as well. Sometimes I am too mesmerized indulging with the intriguing facts and beautiful story line presented in one's blog, I found it is hard for me to participate. But now, knowing them in person, probably have sort of broken the ice.

The night ended with a karaoke session at the club. Even though challenged by several strong in-house contenders, undoubtedly Kak Puteri and Pak Abu were the star for the night. I couldn't join them on the floor as I fear if not the voice broke down on me, the microphone or the sound system will.

Again it was a night to remember. Thank you Kak Teh to make this thing happen and few surprises, thank you Kak Puteri and Pak Abu for being so generous and thank you everybody for making the night a memorable one. That night was simply beautiful, God willing we shall meet again. 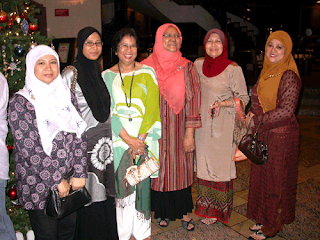 These wonderful ladies of the night are now no more strangers of the night. From right Oli, Kak Teh, Kak Puteri , NanaDJ, Yani and my significant half.

Awang Goneng (in the middle), a prolific writer and one great persona I admire and really wanted to meet and talk with. As he is also a fellow Ganukite with vast experience of course, any knowledge-sharing on Ganukite and the keropok-lekor land will spark my feeling to travel down the memory lane. En. Sulaiman (Oli's hubby) on the other hands, was surprisingly shares similar interest with me and turned out to be a 'segayong'. A master of the ancient martial art, he told me (in his own word) "I still kick ass around". I supposed bad asses, that was what he meant. He wrote an interesting book on martial art (details can be read in Oli's blog)

As the light of the hall started to dim, the atmosphere started to became quite spooky too when Yani (extreme left) started to share her experience on the unseen entity. I was hoping there was no uninvited guests recorded on this photograph, as Kak Teh related her personal sighting during one of her visit to Terengganu's Pura Tanjung Sabtu. That really raised my goosebumps.

Next on the itinerary was a karaoke session. Bravo Pak Abu (Puteri's hubby)! He can really sing and he sang very well that night. Broery's evergreens were his favorite. Earlier, I was about to ask Pak Abu to play a round of golf on one of fine day, but upon hearing that he played three balls and a single handicapper, knowing my shortfall (mine was 18, now probably worse) I might as well become his caddy :)

The very attentive audience. From left Shaheeda of the Cape Town, Kak Teh, NanaDj and Yani. Yours truly (at the back row) seemed very attentive as well but with both eyes closed (concentrating too much on the lovely song...'sakit hati ku...sakit hati ku...). Sitting beside me was Abang Mahathir (NanaDj's hubby) and Yani's hubby.

I am not sure what was so ticklish that they were laughing and giggling at, but I am sure this meeting will be a memorable one for all of us.
Posted by DrSam at 10:37 PM

What a lovely time you have! So, Kak Teh and Shahieda (isn't she from Capetown?) is in KL, ya! I do subscribe to their blogs but most of the time, am a silent reader!

salam dr sam, i think we were still in stitches over "sakitnya hati ini......."

Mia's mom,
Salam sis. Yes they are here in town and what a rare occasion to have caught them in person.

doc, this gath looks classy. how i wish i could join. hopefully next time when i'm less busy :)

booksgila,
God willing, we will meet one day bro. Pay close attention to your assignment/study first.

What's up doc! Yep, I had a great time at the LC and I think everybody else did too. Especially at the Karaoke session with the 'pain in the heart' song. Knew a couple of rocket scientist while in the States and am happy to hv met you. I got a couple of crazy invention ideas that might just work with the right guy. Lets hook up and make this world of ours a better place to live. Oh yeah, thanks for the book mention. I need all the help I can get on this 1st baby. C yah. Peace out.

wow, you had blogger meeting? fantastic! (I wonder why am not in the scenario)

Am glad I went to the dinner...me too have seen your comments in Kak Teh's blog, but tak sempat nak jengok jengok your "home"...lepas ni, lepas ni. Salams to your sweet wife Zayda.

Hi Dr Sam
That was a great get-together! If I'm not mistaken, Kak Teh lives in England, right? I do enjoy her blog. She must be missing our ever-lasting summer & ocassional hujan + halilintar, especially now. Salam bahagia.

Gayong Int. Usa,
Feel very honored meeting you sir. Meeting you was like meeting a legend. A true Panglima Hitam is very rare these days. Rekindle back my 'harimau menghambur dahan' memory. I should pay you a visit one day. Will do that for sure... Insyaallah.

Yes, a good invention/innovation may come and from a very crazy idea. A noble intention always worth a support.

nottingham,
wish you were there too.

about kitchen guardian food,
Nice meeting both of you. Too short a meeting, not much time to talk to. Visited your other 'home'. Hope Muhammad is getting better now.

Salam to your hubby who was so 'sporting'!

balqissy,
The more the merrier!

Temuk,
Salam. You are right about Kak Teh. Like most bloggers of her age, I learn a lot from reading her/their blogs. Yours included.

noor,
Happy New Year to you too!

laki cikgu kimia,
which one?

Hunny,
salam. I thought you were at Cherating, enjoying your sandy beach stroll?

Wow, what a gathering to remember. From virtual to real.

Doc,once in a while event must be full with excitements rite.Happy New Year Doc!

Naddiea,
We make our life beautiful, yes. Happy New Year to you too.