Thunder from the East 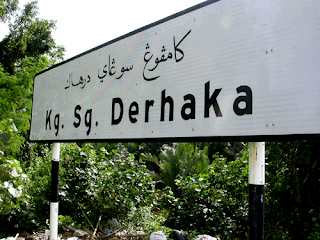 Whether it was a bad omen or just a pure fate I have no way to tell. Years back some would have said it was a dreadful celestial sign from a distant planet and pagans would straight away believe it and probably immediately initiate a sacrificial ritual to tame the angry demons. Others would have thought that nature has it own ways to punish the incompetents and the non-believers, who had never learned from the past mistake. Either ways, I believed sooner or later the land of the-three-Awang would be painted red with the blood of well-fed sacrificial lambs.

Barely six months after the first international embarrassment for the Ganukite, the land of the-three-Awang has made another highlight in our local newspapers. This time it was a bus terminal that cost 4.2 million in Kuala Berang kissed the ground. For those who had never being to this enchanting place before, Kuala Berang was once a sleepy town and probably the only township in the world where her roads were heavily coated with cow dung. Unique in it own ways. This was also the place where Terengganu inscription stone was found in 1899. I am least surprised if this humiliation won't just stop at the nasi dagang stalls alone, but spread into the international front as well. With the advent of the internet (and this blog for sure) news spread far across the continent the moment you blink your eyes. By the time you finished reading this blog, my friend in Tunisia would have been laughing all the way to the toilet flushing her teary eyes, reading this funny story.

If this fateful incident happen anytime during last week, it would have been the right time to snap another historical photos for my personal album. Just like what I did to the crippled stadium six month ago. But I was a few days earlier setting my foot onto that blissful land, mesmerized and deeply captivated by the monsoon blitzkrieg bantering the sandy coastal line.

The recent homage to my hometown however, was full with delectable adventures and few unsuspecting surprises. Garcinia mangostana, the queen of the fruit ripened rightly on time, so as another local delicacies Lansium domesticum. For a moment 'keropok lekor' was well forgotten as we stuffed ourselves well with the sweet taste of those fruits - everyday. A visit to the old but colorful market of Kedai Buloh was like invoking back my museum of memories. Another interesting acquaintance to the new beach playground was a laid-back trip to Pantai Pandak, a hidden paradise I've never known to exist until last week, even thought it was only a few minute drive from my kampung. My kampung has a new signboard too, unfortunately though as superstitious as it may be the kampung is still invisible for the google satellite to capture the location.

Back to the main issue - a well-fed lamb is not cheap these days especially in the land of the-tree-Awang, but Awangs of Ganukite would not grudge a little bit as they believe the money from the fossil fuel would not dry up and will keep their pride burning forever. But they were not to blame having that kind of primitive thinking as even some sophisticated folks in Copenhagen recently would still believe that the world won't sink and we will live forever and ever in this eternal Garden of Babylon.

A Ceaser once said : "The fault, dear Brutus, is not in our stars, but in ourselves that we are underlings". I have to agree with that.

There was no thunder in this Cherating beach when we stop for a night, but the cloudy sky was so ominously heavy with water, waiting the right moment to pour its content onto this aging planet.

My youngest was very curious on those alien objects harboring on the lagoon sandy shoreline (near Masjid Terapung). It turned out to be a line of natural buoy-like pine needles or some kind of bait (my guess) for the local fishermen. 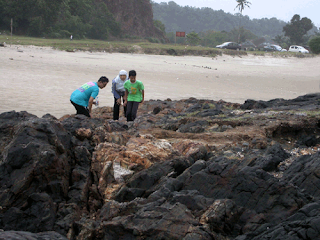 At last we found our new playground, the heavenly Pantai Pandak. Later my father told me, he used to bring me to this place when I was still a small kid - too small to remember though. The beach was unadulterated and unspoiled. Almost preserved in time. Rodat, a Terengganu folkdance was regularly staged here, long time ago. This place was also one of the locations for the film 'Cucu Datuk Merah' (1963) where Nordin Ahmad and Latifah Omar played the main role. 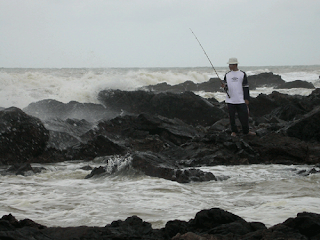 I saw this avid angler braving the big wave try to catch the fish on a rocky bed of Pantai Pandak. This photo actually reminded me of an almost similar photo I once saw by Almarhum Sultan Ismal Nashiruddin Shah in one of his masterpieces. Not sure which one but surely not in his exceptional masterpiece 'Malaya: The Sultan Ismail Collection'. That guy managed to catch few fishes that evening. 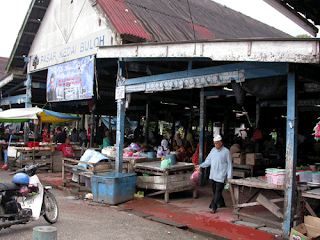 My other half was so delighted when we managed to finally bought 'lok lit', an endemic local delicacy from this old marketplace. My late grandmather used to make lok lit, a special palatable taste bud especially after the paddy harvesting. The smell of freshly cooked lot lit was a divine. The taste was even an earth-shattering experience. 'Netbak', 'koleh kacang' , 'tok aji serbang', 'beke ubi' and 'coklat nissang' was in her experimental list as well. Commendable.

My kids and my significant half got their first taste of the floral nectar from the palm tree (air nira kelapa). My kids got hooked instantly, but my other half thought she was having a drink from a clogged drain :) The above photo was not the palm nectar but the nectar from the nipah tree. So intoxicated with the previous palm nira, I mistakenly bought the nipah nira instead of the palm produce. The taste was less strong and the color was lighter. The kick however was still the same.

This cute little creature was another new addition to our ever growing family of the Razak clan. My younger sister's (cendawanintim), Nur Nayli Insyirah, says hello to the world!
Posted by DrSam at 1:30 AM

just don't see it as bad omen doc...probably bad justification. either in giving the contract, building it or in maintaining it.

In this wee morning (it's 5.30 a.m. here in Dundee) as I read through your blog, I am suddenly missing sata (though it's not in the list of your palatable delicacies this time) the one at Kuala Kemaman (a humble stall close to Pejabat Perikanan Kuala Kemaman? - so so so.... heavenly!).

Another structural catastrophy? Hmmm... Well, it is a "foundation" issue, then?

Anyway, it's safer to talk about the weather. It has been snowing in almost every corner of UK now - some airports closed, some flights cancelled, Eurotrain closed for some time, some roads closed, oh yes Flyglobalspan went for disclosure, some airports is in the process of being sold - hmmm... not bad for a weather summary, huh?

Anyway, nice holiday Bro! BTW, what the curious handsome young boy in blue is looking at is what termed as unjang in our Ilmu Alam book in Standard 4, right?

Salam to Zaida and the rest of the family. My Congratulation to Cendawanintim as well - a pretty baby she has.

Where exactly is this Pantai Pandak. Is it near the Chendering Fisheries complex? I'll be in KT this weekend and would like to search for this place. Thanks.

nahmy,
We just have to wait and see. What the power that be say about this.

Mia's mom,
Salam sis. Hope Dundee won't be swallowed deep under the snowstorm. Depends on the mood, the snow can be fun and also an awful frostbiting experience.

We had our sata at Kemaman as well. Brilliant taste with wonderful texture (no tulang).

ha...ha...you are right sis. It is an Unjang yes! My ilmu alam is not improving after all these years it seem.

Send my warmest regards to your family too. Keep yourself warm and dry!

Oldstock,
Once you passed the Rusila Mosques (the 3 stories complex) from KL, the first traffic light after that, take the right (toward Pelabuhan Chendering). Immediately after that you'll see the big signboard of Pantai Pandak, take left. Follow the road (you'll passed thru a traditional kampung) until you see that blissful beach.

mantan,
I heard there are lots of Mersing folks originated from Ganukite fishermen, who settled down and never return back to the keropok lekor land. Probably one of them came from my kampung? Anyway, thanks for the great info. Now my kampung found her twin kampung in Johore.

The 'sepek' genes run through the family :)

have a nice long weekend to you.

lalalalala.. ganue kite... i loved the view at Pantai Batu Burok when the musim tengkujuh is over... the sea colour is mesmerizing indeed :D