The journey starts with a big bang This new year surprisingly started with a wonderful display of one of the cosmic wonder, a moon eclipse, which happened at the axis of Cancer-Capricorn. For the avid stargazers the sight was something to behold and worth staring at in the wee hour of the morning - Malaysian time. For the fortunetellers and tarot readers this might be a celestial sign, that a year ahead will be bestowed with full of prosperity and all goodness in life. On that auspicious moment, I on the other hand was still deep in my dream, traveling in another dimension trying to open a gate to my brighter future.
As expected, the first dawn of this year came with many chores that has to deal with, especially

with the schooling of the kids. There were however, few unexpected surprises as well. A travel 250 Km up North was a pleasant one as usual, but 'smeared' by an astronomical increase in this year's registration fee. I didn't expect a mere increase of 20 cents in sugar price will increase the education fee by almost three folds - hypothetically speaking. I almost had a heart attacked when I looked at the figure.

Other parents seemed very surprised as well with the unexpected reality that confronted them. Education doesn't comes cheap these days. That is well expected, but not these soon. It should be gradually over time. Probably in the next millennium. In fact it should be free. I personally think education is a collective responsibility of the mighty powers that be. A social responsibility, for education is part of our lifelong journey.

It is one of the core building block in human capital development and one of the important pillars for our country to achieve its visions - whatever it may be.

For the lesser mortals this might mean breaking their 'tabung ayam' or their life saving. Imagine if a parent with more than one kids that has to bear with this financial burden. At the same time I was quite sympathetic toward the teachers who were putting their best effort and their best face trying to explain to the dissatisfied and unsuspecting parents. The memo from the powers that be came into the hand of these unfortunate guardian angels a few days earlier, imposing on the new fee. Many parents caught off guard.

Now it seems boarding school has a different meaning all together. This make me wonder what 'asrama penuh' is all about. During my time, going to the 'asrama penuh' meaning entering a

selected and prestigious school with 'lenggang kangkong" and almost 'sehelai sepinggang'. Everything was subsidized as it was a privilege enjoyed by selected few cream groups in education. Some might argue, we need to abandon the subsidy mentality and move on to be independent or shoulder part of the responsibility. I don't mind if what we are talking about is that diabetic-causing sugar, but this is education. No education, no civilization. The brain will be dead and we will become a zombie.

In the home front, things progress very well. Even though there was some indication of the first schooling day syndrome (kids sleep like a dead horse and very difficult to breath life to them in the early morning), later on they will get 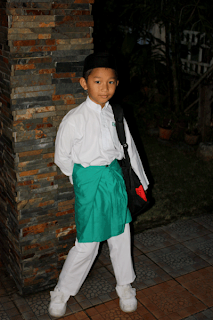 used to it and there is no need to sprinkle cold water on them anymore.

Another annular solar eclipse is expected on January 15, which is happen to be next week. Some part of the world will be partially overshadowed with darkness. A hidden force that controls the celestial movement has once again trying to send a gentle reminder to all of us, the believer. And while Saturn is being located at the beginning of Libra, playing dangerous war games with Pluto, which is being at the beginning of Capricorn, what is to be expected this year?

Once again, my kids journey have just started, mine will continue...with a small bang in my own small comfy realm.
Posted by DrSam at 10:34 PM

Email ThisBlogThis!Share to TwitterShare to FacebookShare to Pinterest
Labels: annular eclipse, back to school

Masanya untuk rakyat berkuasa..di OZ education is free start from the pre-school level until uni level. Most overseas students also got the right for free education for their children....

Air pun free..
tambang public transport ada concessions and the same ticket can be used for multiple services (bus+ferry+train) and can be used for the whole day until end of services

Every shopping market has offered petrol docket for 4-5 cent/litter at the back of the receipt...it's up to you either to use it or to throw it...

I really feel for the less fortunate parents especially when it comes to the cost of schooling for the kids.

i wonder if I have picture of me wearing school uniform when I was in standard 1. hmm. takde kot.

one of my sedara made this statement about his son acceptance to sekolah cluster in seremban. "kitorang pakai cable!" woa, so honest kan??

I concur with free education. However now it's the question of channelling people's funds to proper use. One may question that Bolehland has yet to achieve the certain standard to make free education a reality. But, if education is not of the utmost priority, can't imagine the fate of generations to come. Just my humble opinion though.

Yes, education should be free. It the best investment that the country can make. No need to subsidise petrol or diesel or sugar. Give all our children the chance of quality education. The benefit will pay for itself many times over.

This is the world where money is everything. You can't find any free education nowadays. Oh yes, Dokter Seng, during the previous gerhana bulang, I was fishing. I was trying to catch free fish.

But keep the dream alive!

nottingham,
the less fortunate should not be left to shoulder the burden by themselves. That is the social responsibility of you-know-who.

CAHAYA,
What happen to all your primary and secondary school photos?

The system is not perfect. In some cases, the ignorance and incompetence would deny the eligible one from their right. But at the of the day, the truth will prevail.

out of my mind,
Buat masa ni memang tak perlu dibayangkan sangat, sebab memang dah berlaku didepan mata. Kena terima hakikat, everything got a price tag and nothing is free - in Malaysia.

Mia's mom,
Until we manage to come out from the current 'materialistic' and 'plastic' mentality, education is not going to be the top priority.


Oldstock,
I concur. It is one of the best investment, with guaranteed return.

Sir Pok Deng,
Everything around us changes, but not the mentality. That is one the sad tragedy to our country.

Your 'udang' fishing under the shadow of the darkness must be very interesting sir.

now I know why education should be free. when i was in boarding school my yearly fee was about rm600. Half was paid by the state government through a partial scholarship and the rest footed by my parent.

mizzyN,
parents have just got to be ready and prepared for the uncertain in the future - not only in education but in the upbringing of the family.

could not agree less with you... so many challenges in bringing up a child nowadays.. ku doakan zaman kezaliman dan fitnah ini akan berakhir dengan segera....