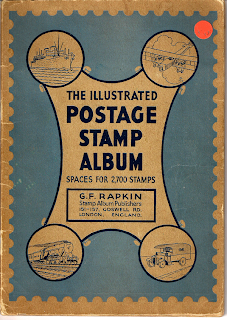 If it was not because of Cikgu Tan Pulau Babi, I might not continue my childhood passion of stamp collecting until now. In a way Cikgu Tan deserves the credit. Cikgu Tan was my mathematic teacher when I was still searching for the purpose of life at SMUSZA, Ladang. I didn't get to know him very well or even to notice his full name. In fact I didn't know where he came from or his place of origin. But what I knew was his usual lepak place called Pulau Babi hence the reason my friends and I called him Cikgu Tan Pulau Babi. In my days and among my small circle of friends, Pulau Babi was normally associated with Muallaf (a convert). The place was a desolated place connected by a dusty road leading toward Hulu Trengganu. At least that was my impression of Pulau Babi.

The subject of pulau in Trengganu is very interesting and until today this subject has never ceased to intrigue me. When one talks or refers to a place named after a pulau in Trengganu we have to be real careful. Unlike the real or true pulau such as the petite Pulau Sekati, or other popular Trengganu archipelago (Redang, Perhentian, Bidong, Tenggol, kapas, Gemia etc.), some of the pulau namely Pulau Kambing, Pulau Rusa, Pulau Kerengga and another pulau that denotes some of the sweetest people in the world i.e Pulau Manis, they don't resemble any floating island that surrounded by water at all. They are all part of Trengganu mainland. Probably these pseudo-pulau share similar fate as Pulau Duyong, which I believed many many Geography years ago was a delta, later connected with the mainland by years of sedimentation.

But lets us not indulge too much about the pseudo-pulau as this entry is meant to bring back my personal account as stamp aficionado. 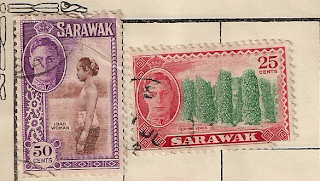 Actually it was more to do with vengeance. Cikgu Tan was a no hanky-panky type of person. Whenever he came to our classroom, a thick arm-length rattan became his best companion he never left behind. The rattan was just like his twin brother. He was very serious with his job and he didn't tolerate much with people who didn't take him seriously in his classroom. That was what I did that one particular fateful day. In between one of his lessons, while my other colleagues struggling to figure out what was the answer to some of the given mathematical questions, I on the other hand was so busy showing off my first ever stamp collection to my other kaki. It didn't take that long before my first ever stamp album was confiscated by Cikgu Tan and I got one stingy reminder on my face. Weird this may sound, but that particular event was the one that triggered my passion. I think I deserved that fiery-palm reminder on my face too.

Since that day and with full of retribution, I started to gather more stamps and stamp albums. My main source of stamp supply was from Kedai Pok Loh Yunang and Pasaraya Hock Kee Seng (both places are now a history) which became my regular pit-stop before I continued my journey back home after the school hours. But that didn't satisfy my curiosity as most of the stamps were normally imported stamps and didn't feel quite real, not like the one I could peel off from the envelopes. Somehow, those stamps on the envelopes seemed to have their own feeling and very personal.

I then started to join pen-pal club. Those days pen-pal club meant you really have to write on paper (or tissue paper) and sent them in stamped envelope as a mean of communication - no e-mail or face-bug whatsoever. Then there was another joy. Mr Postman came only once in a blue moon to our kampung and whenever I saw this ever smiling Mr Postman came by and delivered bundle of envelopes to my doorsteps I became so excited. This meant more new stamps. I could spend hours, not reading the letter but peeling off the stamps from the envelopes, soaked them in water, dried them off in between pages of a book and waiting patiently for them to dry before passionately arranged them in the albums.

This passion with stamps dragged on and at one time I almost became angau with stamps. It was not the same angau feeling whenever you met your awek of sweetheart but those feeling was really fulfilling. The history of those stamps or the story behind each stamps or who was the last person handled those stamps or to whom and what purposes those stamps were for become more and more fascinating than ever. Perhaps those stamps kept the secret for one of the most beautiful love story ever.

mirachantek,
even uncle Gooogle got confused :)

Dr Sam...If im not mistaken la, Pulau Babi name was changed to other proper name. Pulau Kambing.. was it? errrr...

PS: Those are some of your collection Dr? With a kind of serial number tuu:D

At one time, i did a lot of stamp collection tapi sekarang ni dah kurang minat...

...some friends above says it was changed to Pulau Kambing... and Pulau Musang... and they might be thinking of some other Pulaus...

...no folks..! no..! your thoughts will never never correct..! Pulau Babi does exist and staying still, although casting only behind its changed names (which taken place in the era of Tun Razak as a Minister of Rural Developments when nation's Rancangan Luar Bandar was launched, way back to fifty years ago in the early 60's..) comprising portions of Mukim Manir and Mukim Serada, Pulau Babi was onced occupying adjacently facing both sides of Terengganu River... look at the link here... (just steadily enlarge the sattelite view to grab my points..)

...and it's my scribbling memories which I'd penned down here... from the South bank of the river, the point where I stood, that may describe it further...

...yes, Pulau Babi... the name had changed... but neither to Pulau Kambing nor to Pulau Musang... and me myself, humanely, is one of the "produce" of Pulau Babi... cheers.!

Thank you very much yohteh for a very well researched and detail explanation on this mysterious place.

Send my warmest regard to Cikgu Tan Pulau Babi then...

but i live near to pulau kerengga. hihi :)

do come to pasir puteh (merhang) and have a taste of jagung rebus and roti paung, here at my place.

That's the different between you and I, masa tu you dah start searching for the purpose of life [very philosophical], I was busy searching for a girlfriend... hehe :)

"Perhaps those stamps kept the secret for one of the most beautiful love story ever" - such a romantic notion lah doc :)

You collect stamps too? Ahh, nice.

It's like trip down memory lane when I read this entry. I remember when I used to list my hobbies in my KOKU card. 1. Mengumpul setem 2. Membaca 3. Bersukan.

Haha. I wrote the same hobbies for 6 years although I hardly do no. 1 and 3.

little ain,
the road that passes through your kampung always makes passersby salivating. And the smell is nice tu. The kampung should be named kampung asap wangi :)


Syed,
In an almost all-boy school, I have to readjust my priority right le. Not much choice what... :)


CAHAYA,
me too...actually I (and probably others tooo) have redefined the term 'collecting'...yes we do collect them, but almost all of the collections are dumped into boxes, drawers, envelopes etc... :)

Oh When I look at the title.It's already intrigued me!! I think Ive heard about this island before ... probably they change name ke? :D

zafi,
To know more about the history and secret of Pulau Babi, we have to really ask Yohteh. He has a really personal and intimate experience with the used-to-be Pulau Babi.

Pulau Babi? Never knew it exist! In Dungun, we got Lemongrass Island. Pulau Serai. It's not suitable for those who suffer angin dalam badan.

I didn't collect stamps during my childhood days. Instead, I collected pictures of sport cars. They were ripped from newspapers. I glued them in my buku latihan sekolah.

Funny thing is, when I reach adulthood, I don't have much interest into sport cars. People my age normally talk about car's modifications -- like turning a Kancil into a Mira, or a Proton into a Mitsubishi. I don't have interest in that, really.

Sir Pok Deng,
If you notice according to yohteh description, Pulau Babi, Pulau Musang and Pulau Rusa situated very closed to each other. So we can imagine long time ago this place is just like a Serengeti...Trengganu style!