Fool if you think it's over 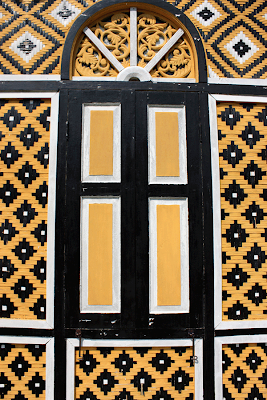 After a week of being consumed by all the office's nonsense, rhetoric and polemic, at the end of the day the limited energy drained thus making this able body became paralyzed mentally and emotionally. The mental become almost fatigue and zombie-state of mind and the emotion was plagued with all the absurdities unthinkable by all mankind. Vomiting won't clear the clogged brain but at least clear some of the pride.
A getaway from this whole madness perhaps might revive the spirit within. I would appreciate the harmonic journey to some blissful destinations, probably a far away places sans corrupted souls that lingered and shrouding the once-heavenly playground. The idea was to motivate the restful soul and to nurture the congested mind back to its fertile phase. The place may not be very glamorous but fit the criteria of one heavenly sanctuaries. Thus last weekend, the unplanned trip took off - again to the quiet and peaceful Royal town of K. Kangsar.
The great migration to celebrate the lunar year however begun with a telltale swelling of major roads leading in and out of the Neon City with a diverse mode of transportation crawling in a turtle-pace, back to back. The smoking heavy metals didn't move in a Brownian movement but straight and linear lines occupying the limited void in one dimension, following obediently the first Newton's law of Motion. It is painstakingly monotonous. Time came to a standstill devoid of any expression in space.

Perhaps the transition between the two celestial animals may has some effect on the way Nasi lemak eating Nation making their decision especially on mass migration. I could not gauge the mood of each and single soul behind the wheel but trespassing onto emergency lanes was a symptom of incongruent multiple personality disorder a.k.a stress. This peculiar behavior is motivated by a lack of self discipline, disrespect to others a.k.a a sign that the souls are still empty and uncivilized.
But again.... that is life.

A family pose on staircases leading to the no-entry castle sans the eldest which was left behind to pursue his dream to become a man. In the all-man's world, a charming rose apparently blooms very well.

Oblivious to the serene and beautiful surrounding of Istana Kenangan, my two progenies tried to have a peek into their future. 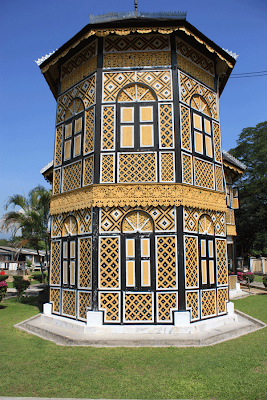 A classic Malay architecture like this is really a heartwarming with a sense of nostalgic feeling from the past that embedded only in ones' virtual memory. 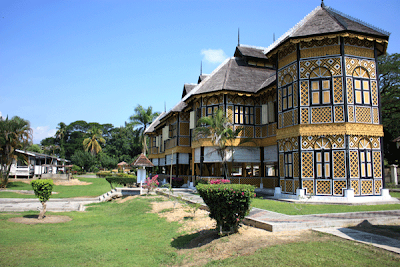 This timeless masterpiece is a good reminder that some thing may change and some don't. Time is the flow of events minding of its own business. It never looks back and never wait for any of us. 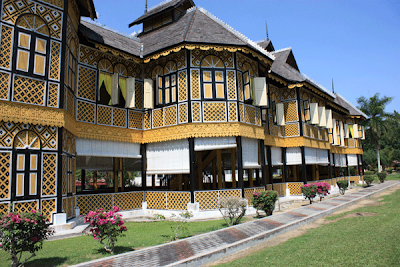 Time and time again, this colorful memory will never fade.

This sort of peaceful setting really reminded me of my kampung life. My childhood companions and myself were occupied with all the unthinkable antics of which I believed are now became relics and probably extinct.
Posted by DrSam at 5:44 PM

KOG,
these type of houses are very practical and so cool.

mirachantek,
...the name itself (istana kenangan) shows that anybody who had lived in this house before, will have a lasting impression.

Nice pictures! It has been a while since our last catch up. Hope we can do mengeteh session w/ few others too soon.

CAHAYA,
Looking forward to have another exciting gathering. Have to round-up all usual the kakis (and also the malu-malu one :).

omg. the building is VERY beautiful!

W. Hidney,
Kampung life is and will always be my choice of life.

I am still lively and kicking as usual. thanks for asking.