An inordinate fondness for kapcai 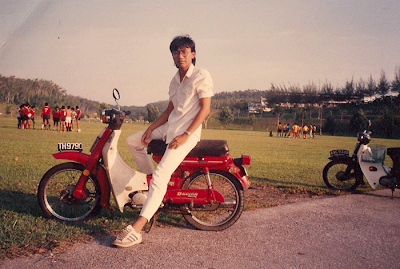 I got my first motor-kapcai after completing my SPM in 1985. It was not because I wanted to join the indigenous mat rempit and terorizing the folk along Jalan Pasir Panjang by 'rempiting' all the way to Bandar KT but simply because I got bored waiting for the offer letter from our local 'menara gading' and have nothing productive to do in order to fill in the void. Those time the word 'rempit' was hardly heard of and biking was still considered a healthy and safe activity because the road was less congested, the lipat kijang skill was well mastered and for some freak reasons it seemed that most kaki motor possessed a 9-cat-life.

The motor-kapcai was a Yamaha Y80 of which I bought (partly subsidized by my father) from my cousin, who upgraded to RXZ 135 which had just hit the market. Instantly the kapcai became the joy of my life. Pantai Batu Burok became my regular lepak place almost every afternoon with my other motor kaki. Occasionally I cruised along the beach alone just to feel the salty breeze slap gently on my face before settling down to stare at the the seafarers passing by in the horizon while enjoying the heavenly keropok lekor. The original keropok lekor and not the one so elastic and jawbreakingly hard which tasted and smelled like a selipar Jepun.

It didn't take that long before my curiosity got the best of me and the kapcai underwent some major cosmetic adjustment and minor body surgery. Under the srong influence of my younger brother and Eddie Lawson's achievement as the world champion in motorcycle Grand Prix, a new 'exzos potong' was fitted to to give the kapcai some distinctive sound identity, a new and bigger piston was dumped into the bored-engine and different size of sprockets were experimented to transform this timid machine into a super-kapcai. The best modification in my opinion that made this super-kapcai looked a Grand Prix worthy was the excessive addition of Nolan stickers onto the body parts.

Despite all the illegal modifications by my father's standard, I'd only involved with only a few minor accidents. One that I clearly remember was that fateful Saturday morning, I sped off with my super-kapcai for my weekly town tour and in such hurriedness and rocket-speed I forgot that the previous day the main road that lead into my kampung was loosely tarred. For a while I think I could easily become a stuntman. The other unforgettable accident involved a cat that had clearly no civic-minded who jaywalked and crossed the road without looking left and right. Luckily both the victims survived with only minor scratches.

My intimate relationship with my super-kapcai continued and flourished further to the ivory tower in Bangi. That was the time when 'Fansasia bulan madu' was the no. 1 hit in my local pop chart and soup ekor and daging merah became a food of envy to any students who didn't have any mode of transportation to reach makeshift kedai tomyam at Bandar Baru Bangi (BBB fasa 1). The distinctive supersonic sound from my exzos potong that echoed nicely in between the hill and Pejabat Pentadbiran UKM had in many occasion caused some dispute among the varsity's Pak guards. Not until they banned the motorbikes from entering the campus which almost caused another student riot that put the end to any sound pollution in the campus.

At the end of my campus year, I was very proud to say that my super-kapcai was still a virgin. During the first 4 semesters not a single awek was shuttled here and there around the campus on my super-kapcai simply because having an awek on a 80cc kapcai (even though a super-kapcai) didn't look cool at all. It was a misfit and considered a taboo and unacceptable by my kaki motor.

My allegiance with my campus kaki motor however was tested to its limit and about to be broken when I entered my third year and some unexpected turn of events happened along the way. I was totally taken off-guard and it happened all of a sudden. Suddenly my teropong iman was activated and I smelled flowers all around me.

But that was another long and interesting story to tell.

never am i fond to the idea of riding bikes.

smelled flowers? falled in love Dr Sam? because of kapchai? he he

mirachantek,
exposed to the polluted atmosphere in the Klang valley is something undesirable but having a cool breeze touching your face along the serene coastal area for example...blissful!

Memorable trails,
You smile, I smile. I wish everybody smile too especially whoever that shares similar experience.

...seconded that there were no rempit but raûng-raûng, no wheely or congék but konar lépér... no awék but mokwe... suitably sounded in those old era... sharpen up your memory throughout those mid-eighties, petang-petang hadn't you stumble upon the red yamaha RX100 with the registration plate of TD 8**4, éjuh ddepér rode by a gent and spouse with two small kids seated alternately in between, at pantai batu burok?
...ah, forget it... the most awaited part must be your next episode... cer citer... cer citer...

yohteh,
aisemang...why didn't you tell me earlier. If my memory serves me right, I remember one mysterious RX100 "ejuh ddeper" that could really put the shame on all the rempit-wannabe because this mysterious machine really breath fire. It was you then! I was told, Usof Wilcha was there too and somebody "ccokek" him thus 'kita bakoorrr je' become his trademark ever since.

...mmmm...the rain outside really inspires me and ignites my nostalgic mode to revisit that romantic path again ...

wow doc! we're basically in the same era la...i know bcause i also use to have that jeans 'kaki kecik'...hehe

nais outfit there drsam. hehe. macam one of the gang of kumpulan gagak hitam (or gagak putih). hehe.

nahmy,
Please share some of your classic photos with us sir! I am glad to know that we have the same taste in fashion - trendy :)

CAHAYA,
FYI sis, that outfit is considered as part of the kapcai accessories :) Your mentioned about Gagak hitam/putih really gave me the goosebumps. Notoriously synonym with 'geng motor' at that time (but of course me not included :)

Dr,
Before Eddie Lawson there was a Freddie Spencer whom I love to watch racing on tv.
Another super kapcai just like yours can be found next to a rumah dusun in Eden Project, Cornwall.

Assalamualaikum, this is the first I have heard of the word kapcai. If you had not explained it I would have thought it was something to do with being cincai.

The motorbikes were a practical solution in campus but still most of the girls walked. I have always wondered why.

I never owned a motorcycle but it didn't stop me from riding one. And I had my share of getting involved in accidents, etc! I think you heard it, people said 'tak sah bawak motor kalau tak accident'? Sometimes, I feel that getting involved in an accident, a minor one of course, is good as it reminds us to be more careful. We all learn from experience!

3yearshousewife,
Yes... the Fast Freddie, another pin-up superbike champion. It was a common sight to see those big posters in a bedroom of any superbike-wannabe those days.

Did you say a super-kapcai at Eden-project? Any Nolan sticker on it...?

In my Uni days, UPM has the most kapcai roaming the campus and surprisingly, I noticed lady riders made the most of their rempit group...unlike UKM and other universities.

Hahaha if it can't, just donate them to me! Hahaha

Faisal Admar,
I think most had already long gone to Kemboja or Southern Thailand to the most needy. Masuk bundle hantar projek amal.

I believe the majority of received already gone to be able to Kemboja or maybe The southern area of Thailand towards the majority of desperate. Masuk bundle hantar projek amal.The seo good site Samir Barai

Hi! Would you mind if I share your blog with my zynga group?
There's a lot of folks that I think would really appreciate your content. Please let me know. Many thanks

Look at my page - a Perfect Diva