My honeymoon in the land of fish and chips

Since my movement is very limited now and my world is only confined within my house and the vicinity of my zen garden. My "uzlah" has given me ample time to muse over my yesteryears, especially during my jihad in the far land - the land of football and weather forecast is a popular chat line.

I spent several years in this small city, in the northern part of the UK, The city of Durham, Land of the Geordie and big castles. A small city off the M1, used to be a coal mining territory not so long ago. We can still smell the strong and hard stench of coal fuming out from the chimneys if we stray a bit further into the many remote and scenic villages scattered along the valley.

Whether I was too smart or it was just a pure luck, I actually got several calling from the Alma maters over there and across the continent. I didn't fancy to go to the cheese and tulip land simply because cheese is not my staple food and i was too worried that the Dutch soil will be submerged under the water in no time. Even though Durham was not in my dictionary at that time and I have to search the globe for it (mr google was not invented yet that time), it became my playing ground for four splendid years later on. And other Alma maters have really turned me off as the name of my supervisors-to-be didn't sound much like a British at all. No point going over there, spending 12 hours in a plane and what you got was merely immigrants who have just got his/her permanent resident status. Vepeenikee or Veyenthomou...what the heck. I think "karipap" sounds much better than that. hiiiii..hiiiii (with a devilish smile).

So I chosed Durham not because her university is the third oldest university after Oxford and Cambridge, but obviously because Prof. Nick Harris sound very much close to the fish and chip and he did mentioned earlier that his favourite movie were "Mind your language" and "The Benny Hill show". A true Englishman. Such a nice mentor and a good friend at the same time. He was very accommodating and I felt very honored to have that golden opportunity, spending many hours in laboratories which resembled much like a dark dungeon, trying to figure out why the cells in the plants didn't evolved into a human limb. We almost had a breakthrough if not for my sponsor sending a warning letter to cut my scholarship for having my honeymoon too long over there. Hey..how come I didn't have any photo of him. Bugger!

One thing I noticed over the years was how nice the locals treated us as a foreigner and at the same time respecting the difference in our belief. We made many friends along the way and whenever we did something or buy something "thank you love" or "thank you dear" is just a norm with a big and sincere smile in their faces. People will give ways to the elderly and parents with small children. This is something that I missed in our own society, so much so for a "masyarakat bersopan santun dan berbudi bahasa". And in that far land, Zebra crossing is not for a zebra to cross you big head!- for crying out loud.

p/s: this observation was however only apply in places where local (read = British) is the majority. And I hate big cities for that very obvious reason, London included. It sucks!

Durham medieval castle right in the middle of the city center, now home of Durham University College, one of the students collegiates since 1840. On the right is the Milburngate bridge that connects the old city center with an ultramodern shopping complexes.

Durham cathedral at night on the far right. This cathedral has been described as "one of the great architectural experience of Europe". It was built in 1093 and took 40 years to complete. The smell was however so pungent I could only spent no more that 30 minutes inside the building admiring the great architecture.

A popular hang out place for students as it was situated right opposite the main Durham University. The food was terrible, especially compared to other similar pub chains. The usual choice was the 'scream burger' which was lump of greasy meat sandwiched between a stale of bun along with some dry tasteless chips. obviously not one of my choice though. But its beer garden was a nice place for a chat during summer time.

Mr. Urwin and Susanne with their beautiful flower from the Tyneside, are our family friend. He is a big fan of Bruce Lee. 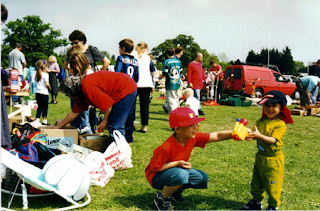 Car boot sales were our past time activities especially during the weekends. An event that other families were also enjoying too. I think half of my scholarship was wisely spent here in getting good bargain for children's toys, antiquity, books etc. The toys were so good it last until today, passed down from my eldest son to the youngest one.

Angel of the North is the icon of Gateshead, a small city in the northern part of Durham. As the name suggest, it is a steel sculpture of an angel, 66 ft tall that was erected in 1998. This photo was taken during my experiment with my newly bought 16mm fisheye lense.

Durham market square where the bronze Statue of the 3rd Marquess of Londonderr in the background. Every saturday morning this place becomes very lively with people selling their local produces.
Posted by DrSam at 7:47 PM

salam...
We seldom hear 'our people' say TERIMA KASIH as if the word is too precious to be spelt out.
Yes, wonder where the 'sopan santun' is..?

angel brought me through...

you have a good writing skill. keep it up..

i am following you sam! hahahha

by the way... do drop in to my little archive shall you have time..

Yes, that really saddened me. Do not now what and where goes wrong in our society.

thanks for dropping by. It was good to see you are fallen from the sky with the angel.

Blogging is part of my effort to sharpen my writing skill. Still learning like others as well.

what happen to the M1? lama dah tak kesana.

i love the benny hill show. it was wacky. oh i love to go to UK, one day soon. been to auckland city, n love it there but still malaysia is in my heart.

Yes, benny hill was so hilarious.

Happy New year to you too.

like seriously..i like your language. not exactly the way you write, but the fact that it's comprehensible and friendly. *^^* happy new year to you!

Thanks Hanna and glad that you like it. Happy new year to you too.

Hey bro. seriously you are very good in writing, I like the way you write...(in a serious face).

After reading your post, i miss my university days very much, those days are the colorful days of my life which contained the most beautiful and joyful moments. I wish i can go back to those good times one day.

Have a joyful day and get well soon.

Now my back getting better. Thanks.

like the too smart part. a doctor should be too smart don't you think? after all, who can possibly debate over a doctor? i won't risk my life haha. btw, i love tulip :P it is simply true love. i know it doesn't has good smell like rose :P

how i wish my supervisor got british accent :P i just thin the accent is sexy lol. hey! sexy accent is not obscene :P

what is that? Vepeenikee or Veyenthomou? sounds so new castle :P

love and dear sound so scottish. i got a friend from there once upon a time ;)

Ahaha. Y'know, 'Karipap' was what my 'fellow schoolmates' called me back in primary school. They couldn't say my name properly and thought Karipap was cute and funny. So the name got stuck. Apa la dey... Hehe.

While having that feeling, it is not advisable to date your GF. Pity that girl if you do so :)

haaa.haaa..didn't know people will call others with such a name. But it sounds nice though.

TQ. we paint our life to be that colorful. Hope yours is as colorful as well.

Once we have a very wet summer . One whole summer it was raining. nothing much to do except watching our favorite TV sitcoms.

salam..wahhh...remind me old good days...dont get me wrong..Malaysia still in my heart.. but really my journey to that far land changed myself to become more civic in person. So are you on medical leave bro?

Salam, I got here via Mummy Rokiah, I think. Your walk down memory lane in Durham is indeed interesting, never been there myself but i have certainly read about its beauty.
Alas, it makes London sound so dull. and perhaps it is.

lama menghilang. thought you are busy with your literature rev.

yes, now I am on medical leave. until next week.

Welcome to my blog. Perhaps I am not a metropolitan-type of person. Cozy, quiet and scenic environment is probably my choice.

Gambar2 kat blog you memang very nice..
Thank you for sharing them with us.