When I was in my early education stage up to the primary schools (four primary schools altogether), I have only one small bag to carry everyday. I called that bag a "bag kotak". It was actually a box with a safety latch on top of it.

I walked to school everyday. Almost all my friends walked to school as well. It was fun. On one of the bad days though, while walking to the school, the latch will just snapped open, throwing everything inside the bag onto the open road for everyone to see your precious treasure. And it contained just about everything from my exercise books, the stationary, my favorite comics (among other were Bujal and Wak segan) and also my lunch pack. If it was raining a day earlier, everything that fell into the puddle will look more or less like bubur asyura. 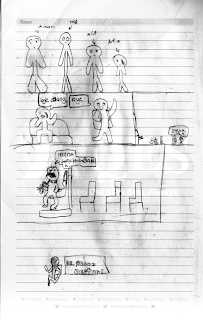 Nowadays, our kids have so many bags to carry to their schools. One for their primary school, one for their religious school and one or two more bags for their tuition classes. The bag weigh many kilos too, by the time they reach their puberty, their back will look similar to the hunchback of Notre Dame. If you have many kids, then I am not surprised to see their study room will resemble a store full of bags.

With so many bags around, you'll never know what to expect or find if you peek into one of those bags. Once in a while the parent should do just that. Have a peek into their bags. I just found out recently that in one of my kids' bag there were several scrap books and they were full with sketches similar to these ones. I found some interesting but yet peculiar sketches in one of my second son's bag. It was very interesting to note that my second son has started to show sketching skills since he was about four or five and this was evidence on the walls of my house. Never mind about that, since I don't have to pay a single cent and yet the interior designing has been taken care off by my second son. What more interesting was, he managed to sell few of his collection to his peers. What a good combination. Creativity plus entrepeneurship skill.

I must confess at this point , when I was at their age, If I wasn't playing with friends, I will spend almost every evening watching cartoons. Especially the English one. I realized later on, apart from reading comics and books (of which sharpened my writing skill) my command of English getting better and better the more I indulged myself with this obsession. It was hard those days when almost all of your keropok-lekor peers who did not converse in English and you want to practice that language at the same time. It became more difficult because I did not attend ordinary school, but Arabic school (in my hometown, sekolah arab = sekolah agama) which did not emphasize much on English subject. I attended Arabic school and then the Arabic college until I was seventeen. Why didn't I became an Ustaz then? That was another interesting story though :)

Even today I am not ashamed to admit that I still fancy watching the many cartoon shows on TV, especially the Japanese anime. As for now, I am trying to learn and pick up the Japanese language as my other foreign language. Just for fun. We'll see.
Posted by DrSam at 10:33 PM

Kids have to play to be smart. Let the Picasso and Vincent to be draw... I used to love drawing human figures but now I am more focused on drawing trees... dying trees that are barren. Why do people want to send their kids to Arab Schools? Not that we speak arabic here in malaysia.

Teacher,
I like drawing too but didn't find my talent there. Now I am drawing with light (photography).

In my place they called "sekolah agama" as "sekolah arab" as we were taught in Arabic.

Still could not get into your blog. it seemed that you've disabled your profile. could you give your blog address pls.

Hey Bro. congrats to you have such a talented son, very creative indeed so beautiful, like father like son ya!!

I am also impressed that you actually study in Agama school which not emphasize much on English, mind to share your secret how could you master the English language so well???

tchersally,
pity the kids and also the teachers. Both have to work harder these days. Tq teacher!

DrSam,
Your bag 'reminds' me of mine :)
Now these kind of bags (beg kotak) are pretty expensive due to their vintage value :) (hence, that shows that we're as vintage as the bags :).

Cartoons? I'm into classic ones like Donald Duck & the 'gang'

Good luck with your Japanese classes :)

MariaFaizal,
Saw similar one in the antique shop. yes you are rite, we are a vintage now!

alwiz bring such a nice feelings when someone appreciates us as teachers..tenkiu..tenkiu..

Haha! What you wrote about you & your son reminds me of my brother. He was like that back then. And he still is. Suka melukis & sampai sekarang minat sangat ngan katun (tak kira katun apa pun)!

WELCOME TO THE WORLD OF CARTOONNNNNS..

Zatil,
Yes that basketball anime. good storyline, but did not pay much attention that time since engrossed too much with Samurai X.

my lover is learning japs and looks like it isn't easy :(