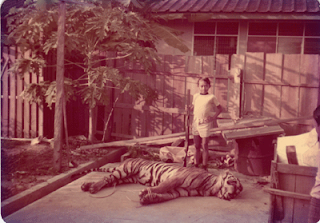 Looking at that rustic photo of me and the tiger, I just can't wipe the smile off my face. I can still vividly remember the proud feeling of standing over the mighty but then-lifeless beast, holding my father's unloaded gun and posing for that momentous photo shot. The triumphant feeling was probably similar to the feeling of blood-gushing adrenalin when a headhunter beheading their enemy's head. Nope...that was too gross. It was more to a sweet memory of an eight years old schoolboy, having the trust of his proud father to guard the lifeless tiger.

That was not the first time though I had that same feeling engulfing me. That same feeling I had every time I were to be at close proximity with these wild beasts or when I came face to face with the same species at my office. You know, that beastly beings that roaming mercilessly, looking for their helpless prey down the corridor.

This is not about the poaching adventure I had during my adolescent years. Tiger is a protected animal and an endangered species (This put them in the same league as prolific writers in our organization). Their numbers is dwindling fast all over the world. If there is no continuous effort to conserve this beautiful animal, our next generation to come will think that a Bengal big cat is as docile as their Persian kitty pet.

That photo was taken in Kemaman, Terengganu circa 1976. It was a normal scene every time my father, who was a 'pegawai mergastua' at the time, coming back from one of his official duty from the deep jungle in the rural area. In almost all occasions, he will bring back with him his game 'trophies'. Some can be very cute life specimens from the other wild species, which later became my pet for a short period of time before officials from his department took away my pet for their safe keeping. If my memory is still good, among the long list of interesting pets that I have was a baby sun bear, a porcupine, 'siamang' and 'mawas', a tiger cub and mousedeers to be exact.

Whenever, my father went out into the jungle, which could last for several days, I can sensed my mother's anxiety, from the somber look on her face. Suddenly, there was no more blabbering to our mischievous activities. I knew, she was very worried and praying for my father's safety. Once I overheard my father related to my mother the story of his junior colleague, during one of his tiger's stake-out (a tree ran, usually a few yard from a carcass previously attacked by a tiger), came down from their tree ran for a midnight wee. In split seconds, an injured tiger leaped out from nowhere and attacked the man. My father and his other colleagues gunned down the tiger, thus saved the poor fellow from becoming a glaring headline in the local newspaper.

I still remember especially during the monsoon seasons, when migratory birds flocked the wet paddy fields or resting on the nipah tree lining the river near my kampong in Terengganu, my father will take me and my younger brother for a river cruise with our grandfather's boat to shoot few birds with his shot gun. It was almost like an annual ritual, a father and sons get together thing. The sound of the gun shot was so thunderous I have to close my ears with both hands. The delectable taste of these birds (we called the white bird 'burong kuto' and 'itik air' for birds that settled on the paddy fields) was awesome.

That was 28 years ago, but even the taste is something that I would still longing for, I wouldn't eat the bird now as the H5N1 is far more precarious. Once when I was considerably stronger, my father taught me to shoot squirrels that infested on the fruits of our villagers. Instead I shot many coconut on the tree as my practice and this really enraged my grandfathers as it turned out most of the coconut trees were his :)

My father has long retired from his service and surrendered the gun to the authority. I've never had any chance to get my hand on the gun since then. Spending a moment or two with my father, some time feeling like a predator hunting for its prey was my lifetime memorable experience. So precious!
Posted by DrSam at 12:03 AM

i am afraid to see animal coated with blood. it will give me great nightmare!

daddy used to follow his friend hunting birds and porcupine. when i was a little kid, i really wish to be a vegetarian for some reasons.

wow doctor.
you looking very proud in that photo.haha...

Faisal,
We really get used to see all those gross sight, it became a norm those days. porcupine meat can be very tasty too.

If my memory is still good, among the long list of interesting pets that I have was a baby sun bear, a porcupine, 'siamang' and 'mawas', a tiger cub and mousedeers to be exact.

a very great experience..the closest i can get was by going to the zoo...ahaks

Dino,
Have not been to our Zoo for quite some time :0

I tagged u. haha..read my blog!

Wow! The photo is priceless! What a precious experience & memories!

Unfortunately our children now plug into the world of TV, Online game, Wii, ipod, ps2, ps3... I don't think they will ever have such wonderful experience in their life, probably they can experience it in watching Youtube....

I agree with Daniel.What a priceless snap. The closest I could get to a tiger (lifeless or very much alive :) is by going to the Zoo or Safari.

But I love all animals & not sure how I feel when I see the lifeless tiger. I might cry thinking that he/she might have offsprings of its own. sob sob sob...

Daniel,
Yes I am very much pity them and their generation. There is so much they have missed and going to miss in their life.

MariaFaizal,
I would have felt the same now if I were to look at that lifeless soul again.

The plan. Expecting you answer as well :)

Bro jon,
I thought you are an ardent fan of Sun Tzu...know your enemy well first bro...

I've already emailed you on 'the plan' :)
Which of S.Alam r u in DrSam?

Friday night wz CK after Maghrib prayer would do?

Only the venue yet to be decided :)

Your posing itself macam u yang tembak the tiger

tchersally,
Yes, the sweetest memory was being able to spend time with my beloved father.

perantausepi,
I supposed most of the readers are 18 and above :)

MariaFaizal,
I've read your email and got your number. I am close to Kota Damansara area.

oh my God! is that really you DrSam? wow... you must have been proud to be standing near the deadly Tiger..

you surely had a great experiences of hunting with your dad...

Kengkaru kong,
I wish I could turn back the clock. Priceless moment.

Tom,
Hello my friend. I am fine, TQ. Everything seems to be a bit quiet here, but life goes on as usual. I have read your entry. nice poem.

Dr Sam, this is like having an adventure at your doorsteps. But I can imagine your mum's anxiety.

Kak Teh,
It was a great experience indeed. Only a mother can really understand another mother's feeling.