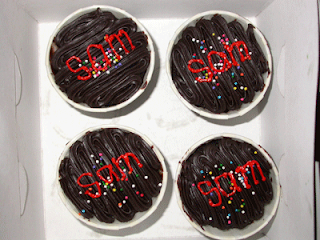 Thank you Maria for these nice and lovely personalised cupcakes. Yummy!

The meeting with cool bloggers Maria and Rose was simply marvelous. That was the first time all of us met actually - out from the cyberspace and into the real world. It all started when a curious Maria did not satisfy with my answer on something that I described earlier on my blog. And I promised to explain it in detail if we can have a 'teh tarik' session somewhere. Somehow though, during the meeting I couldn't help myself and so captivated with man-to-man talk with the two cool guys, the conundrum left unanswered. Even after the meeting I am sure she is still and wondering and puzzled over that particular brainteaser. She was left deep in though she even forgot to notice her 'maggie goreng' was getting colder. Luckily her gorgeous Ayesha came to the rescue and finished it up.

I told Maria that I was going to be a bit late since we have just come back from Kelang with my parent and my wife has to settle few domestic chores first. The place was at a 'kedai mamak' in TESCO Shah Alam. The meet up became more interesting when, Rose aka Cabaikering came all the way from Penang and agreed to join up.

The get together meeting turned out to be a very memorable one. Rose accompanied by his handsome hubby, Adam together with their lovely kids Ali-boy and Meerza. While Maria came with her full entourage of cheerful Faizal, and two gorgeous little kids - Adam and Ayesha. I didn't bring along my soldiers as they insisted on staying at home with their Grandparent.

Time did flies and we were so engrossed talking to each others, we did not realize it was almost 11 p.m and the shop is about to close its business for the day. We were the last person actually to leave the shop and everybody seemed to be very excited and looking forward for another meeting soon.

For a full report you can visit Maria blog here and by Rose here. As suspected, both has unwittingly blown up my true persona. There goes my cover up :) Thank you Maria for organizing the meeting and thank you Rose for coming all the way from Penang and taking the effort in meeting us. The next round, probably and hopefully going to be a bigger turn up and I think unanimously you are the best person to be our cool bloggers' event organizer now :)
Posted by DrSam at 11:27 PM

wow!
how about mega gath?

DrSam,
I'm glad you liked the cuppies :)
Hope Sis Zayda had had bites of them too!

Yup, I'm still searching for the meaning (google & everything - I have Malay/Deutsch book on provers or saying) but NO "Perempuan Banyak Kaki." You did say somegirls behaving like 'sotong' ?

Can't wait for the next meeting (Hi there Super Hot Daniel!)

We'll just set a date & meet up at The Curves. Place? So many choices!
We can just "OneTwoSOM" there...hehe

Have a great day to you & yours!

PJ selamba,
any effort on bringing people together for a good friendship is all welcome. I think the lovely Tun Teja (http://tuntejablog.blogspot.com/) is now planning to have what you are having now in mind ;) Go Teja!

Maria,
Thanks again for the luvly cupcakes. Frankly speaking, I didn't even have a chance for a bite. The moment after I took that photo, the cupcakes were all gone!

i want that cupcakes!!!!

yummy.
i want 1 of those cupcakes.
haha.(menyebok je).

Snowwhite zone & PhiloColy,
Mine has gone with the wind, maybe the sweet Maria could help :)

I love to join if i got the chance to change view and opinion with experience sifu like DrSam. Im sure lot of thing can be learn from you. :)

patungcendana,
Hope you got back your concentration after a cuppa. Is it still raining there?

Hope,
I hope you can join us in the next meeting.

JohnJenin,
Of course and you are welcome to join anytime.

thank u sososo much..
sorry for the late reply.. im a lil bit busy with fashion show..

wow. it's actually a bit hard to start. but when you actually done it, it will hard to stop!

CAHAYA,
Just do it!

i.am.belle,
Diva mana boleh tinggal. Provisionally, D'Curve is the next stop. And TQ for the new link.

DrSam,
You have hundreds of followers.Oh dear.. not sure if I'm capable to 'organize' such a huge event here.You fix a date (I don't have any paper works to do here, so I believe I'm quite free most of times - especially when no trip abroad planned so far till April :)

And once place identified (I'm thinking IKEA as we could send children to 'nursery or playground' there:), we'll re-announce at your comment box for "at the time's" latest entry. So, whoever wants to join, be our guest. Does this sound alright?

**If you're occupied, doesn't have to be so soon. I'm regular at IKEA, so I'll buzz you if we're there around the area :)

And of course, if any parents feels uncomfortable leaving their kids at the store's playground, the children are also welcome.

The cupcakes look so YUMMMY!!!

not raining anymore today...and i feel so much more human...hehe

Maria,
The event manager has spoken! TQ Maria. The plan looks very irresistible. Since we are not sure on the number, any 'kedai mamak' type-of-restaurant should do. The objective is simple - a friendly gathering purely for a good laugh! And everybody is welcome.


ShiDa,
FYI, somehow it is very difficult to get access to your blog these days. The loading time is very-very long, and sometimes forever!

patungcendana,
The rain starts to shower our place these few days.

Syareena,
Good to be happy.

aShaBuLz,
That is the spirit!

Wow! so serious now! 100+ bloggers plus family members, I think we need to rent a badminton hall or stadium man:)

Glad that you guys have a cool time, I will try my very best to join you guys next time, It will be cool to make some friends that from different background & fun also!

It's cool to meet blogger. But I'm way too shy. LOL.

Didn't know Cabaikering is that active :)

DrSam,
You're the celebrity here :D
So, whenever you feel ready to 'ambush' any place, roger me k?

Where you think has HUGE space that doesn't need rental?If it's really gonna be mega gathering of your fans, I'm thinking POT LUCK.

OR else quiet/not so noisy restaurant where when everyone is seated, we can stare at each others eyes (means seat closely)*whoa*

Daniel,
it is becoming so hard now to be serious yet so cool at the same time.

And I will make sure there is plenty of ice around to cool off a hot guy like you :)

tchersally,
Whenever you are in Kay El, why not?

Faisal,
Still waiting for a shy ex-model from Penang to make his first appearance in Kay El.

Rose aka Cabaikering is a cool lady you know.

Maria,
Of course...Daniel is so hot, no mamaks will tahan with his hotness :)

The place : there is a food court on the top floor of Ikano/Ikea. If we meet not during the peak hours, the place should be almost deserted. Plenty of choices. What you say?

patungcendana,
Hope no more teardrops in the rain.

DrSam,
That's a great place to meet up.Guess during w.end, everyone goes to more 'hip' spots at The Curve eh?

*You're gonna have to make an entry specifically to announce this meeting.

You are so NOT boring!Eventhough for a scientist *chuckles*

P/S: I've been 'seducing' hubby to fly me to Cotswold. Just love the cottages there :)

Maria,
Thanks for the suggestion. i am trying to figure out how to make a temporary billboard for the announcement (saya budak baru belajar :)

Now you are making me nervous, the test tubes in my hand is trembling :)

Costwold...! Jolly good. I better leave now so that you can continue to seduce your hubby!

Tq for visiting my blog sir. Do come again.

patungcendana,
Smoke on the water..?

PJ selamba,
Will try to organise one soon. Probably like tchersally suggestion, a weekend during this coming school holiday.

it's always good to mingle with new friends :)
they are no longer stranger then

March 7 looks good!(10 Rabiulawal)
So everyone set?
Just need an update on the event :)
3pm - 4pm just nice..Already school holiday at the time?

P/S: You're not gonna bring test tubes during our meeting up rite?...hehehe...

And, my hubby is a happy man here.Said Cotswold only if his co.earns enourmous profit this quarter. Crossing my fingers here.

So, when is this billboard gonna be up? *wink-wink* Wanna see the creative side if yours.Cheers DrSam.

re:...to choose, sometimes you have to eliminate choices...

miezi,
Yes, it is good to get to know new friends and meet new faces. So I can safely assume that you will turn up for our next 'mengeteh' session right?

Maria,
Ha..ha..creative side of me...fumbling now with the Photoshop. Where are our creative friends out there. Help!

If I am not mistaken, the school holiday starts on the 13th. Thinking we should have a meeting on the 14th (Sat). But if you want to have a preamble, then anytime you are in the vicinity, hello us lah.


patungcendana,
LOL...a new album of the legendary DP I supposed :)

re:....don't give any choice at all...if it is good or makes you feel good, just do it! No harm along the way of course.

Sure Doc.I'll roger you if I'm in the vicinity (IKEA's having this SALES!).

7th or 14th, shouldn't be a prob to me (unless if hubby suddenly assigned to do outstation works on the 14th).

P/S: I have a confession, if this meeting gonna be mega-gath, then I guess I couldn't have YOU & Sis Zayda ALL for myself, he he...I'm a greedy,greedy human!

Hi doc,
Though air asia is cheap, still the place is too far away to mengeteh..

So, lets get together!!

Wonderful Billboard! Count me in.
Both dates? Anybody 'upthere' wanna give preference?

(Doc, I really thought before that 'mengeteh's limited to having late supper.Didn't know that tea time could be considered mengeteh as well *chuckles*)

Maria,
I am comfortable with both dates. It is up to our friends now to make their choice.

No worry Maria, I will make sure my clones will be around too to mingle with everybody.


madam gold,
Have car will travel :) If you can't make it this time, I am sure there will be many more mengeteh sessions to come.

Maria,
Few friends having a cuppa, anytime, anywhere - qualify for a mengeteh session.

oh sure. ive met some bloggers b4 (including the "anon" ones). just lemme know the details k :)

miezi,
will update when everything is finalised.