It was the tiger of Delong that brought me to Dungun 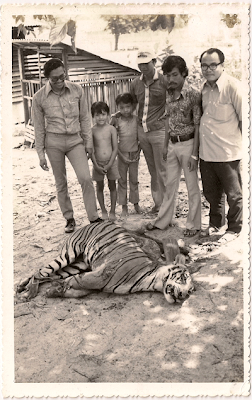 More than three decades ago briefly after my fourth birthday, my father brought me and the whole family to Dungun, leaving behind my illustrious but sedated childhood kampung life in Kuala Trengganu. My father was promoted and has to open his new life chapter, outside his presumably kampung comfort zone. For me, this second chapter of my life was no more that just empty pages filled with vague memories that if put together will make the storyline zigzagging with no plot to the end.

We traveled by a jeep, cramped with all the important possessions you could imagine that fit in a good and humble urban government quarters. Those life-saving vitals included few chickens, kekabu-filled pillows and beds, my father's Vespa and my mom's most precious kitchen utensils consisted of rice cooker and frying pans.

I couldn't remember much on that long and historical journey as those event took almost five thousand moons ago. It was the first outstation trip for me and it was a long one. There was not much detail I could dig from my memory on the trip as I was sleeping all the time, except that we stopped briefly somewhere at Bukit tebuk. Under deep vegetation and dark canopy my entourage rummaged the forest to collect some palas leaves (a palm leaves normally used to make ketupat). Actually I had no idea why we need that palas leaves but it was the only vivid flashback in the whole journey. I was accompanied then by my three very young siblings.

Dungun was a very sleepy town that time. We settled down peacefully along Jalan Tambun not far from that famous Padang Astaka. But my father's life was not that calm as the place itself. Around those time, my father was quite occupied and actively involved with tracking the wild games around Dungun. Jerangau-Kijal stretch of mainland was deeply covered with pristine primary jungle and those were famous playing grounds for Malayan tigers. Upon reports from villagers of the attack by the tigers, my father and his team would be dispatched by his department and disappeared for many days into the unknown territory, putting up traps and having many nocturnal stake-out on makeshift tree-huts stalking these protected animals. Many stand-offs and also close encounters resulted in some casualties on both parties.

The first photo was a clear evidence from one of those fateful encounters. At the back of the photos was scribbled : 24/6/75, Kg. Delong, Kumpal, Dungun. I was just in my first year in a primary school. My younger brother was the one standing beside me, flaunting his bare belly which looked a bit of the 'boyeh' side (cacing kerawit (hookworm) was quite rampant and later diagnosed for that 'boyehness :). I stood proudly beside my father (the one with cap) but still kept a distance from that lifeless man eater. This photo made into the local tabloid the next day, with me looked so untidy sans the morning bath. 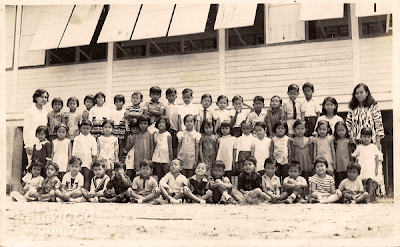 Most of my life on the other hand revolved around a sekolah tadika, which situated very close to the town marketplace. I walked with my younger brother to the school, pacing slowly and playfully with my peers. Occasionally, we would stopped along the way for a quick bite of hot and freshly baked kuih bahulu offered by few kind-hearted makcik or to pick some jambu air (wax apple) that littered with abundance along the road.

At noon we rushed back but stopped at one particular junction eating the jambu while waiting for a van with big speakers mounted on top announcing new movies premiering at Panggung wayang Fajar near the Sura gate. They will disbursed some movie circulars to the onlookers and we will ran after the van shouting 'saklar...saklar...saklar'. Those 'saklar' were then used to persuade my father to take us to the panggung. Most were Hindi's movies of which very popular that time (the sad ending Haathi Mere Saathi is one of them).
Dungun beach was not very far from our quarter and my father would take us there whenever he was around. It was just a walking distance away. That was my favorite place as far as i could tell. Remis, a kind of seasonal edible sea mollusk was easy to find along the beach those days.
The sense of place, the intensity of smell and sound, the sheer physical sensation of being taken somewhere else was fresh and powerful and exhilarating. Soft whispering breeze of South China Sea keep narrating the stories into my ears. I trudged through the familiar prose over and over again but somehow at night I couldn't get it out of my mind. Dungun stood as mysterious place as ever. This commands another personal visit to the place or a brisk walk through the memory lane to bring back those colorful life I missed so much.

that 'boyeh' boy statement...
- brings back the memory of my staying at the Batu Gajah hospital end of 1974. All because of the same 'cacing kerawit' and 'cacing gelang' rampant at the time.

Credit should be given to your father for capturing these precious moments!
Not many people have the opportunity...especially during black and white days.
A picture speaks all...
Good day.

Salam DrSam,
Only know Dungun intimately when I married a Dungun lass in 1991.. and I believe "your quarter " might have been demolished last year together with the "padang zinc merah" ...
I remembered Kg. Delong , Kumpal.. it was just around Padang Pulut.. we have 2 Che Gu's who wanted to sell 1.5 acres of land at RM30,000 back in 2008..
If you want to bring back those memories.. you have to do it fast.. pantai teluk lipat is losing it beach to the sea at a rather fast rate now that we have this global warming... and we have road expansion project that is ongoing in Dungun for the past 11 years..

Kesian Tiger - was it terrorising the Delong folks?

Kama At-Tarawis,
I really hope the soul will still remain...unchanged as it is 30 years back and many years to come. But time never stood still.

ashley,
Now you really made me think, the 70s was the era of cacing kerawit! I should dedicate one entry about this too :)

hazeleyed lady,
I am glad to have such a good collection of B&W photos. You are right...some of those photos have many untold stories which from time to time were unfold by my parent for me to rejoice.

Wan Shariff,
Pak Wan. thank you for updating me on the current development that is taking place in Dungun. It is so sad to hear some of those memories have gone forever with the new development taking place.

Are you now residing in Dungun Pak Wan? I haven't visited the place (my old quarters) for almost 30 years. Those days my playing ground was quite limited as I was still small and didn't have much liberty to roam the place on my own. So Kg. Delong or Kumpal area was very much allien to me. RM30K for 1.5acre seems a good bargain. Sounds like a good place for a peaceful retirement retreat or another nice investment in small livestock project.

Faisal Admar,
those are some that I managed to save from extinction i.e from rain, bug infestation, misplaced etc :)

Zendra-maria,
Normally the tigers were captured alive but this poor beast I was told not only sapu the villager's livestocks but also harrased and sapu the innocent kampung folk as well (plus probably challenging the renjer for a duel :) .

true, the breeze of south china sea is soothing. but it is not enough to sooth the eye soaring experience that I had yesterday at Pantai Balok, rubbish everywhere.. sigh!

...remind me most to another forty years back... zamang 60'an, seluar ketat gelemat, dabba panjang dan bojéng jjetak... "saklar sse" back then was a life weekly routine in the remoteness of our kampung... still keep a seluar ketat dalam rrobok sebaga kenangang..!

Elyn,
Salam Elyn. Mmmm...Pantai Balok in Pahang shares the same stretch of coastal beauty with the ones in Keropoklekor land. Now I am wondering why those debris has more preference to land on that side of the beach instead her close neighbor?

yohteh,
...but the sheer remoteness of my kampung deprived her of any saklar circulation those days... as far as I can remember. I bet your rrobok must be full of 60s memorabilia and 70s antiquities Yohteh...Perhaps in 30-40 years time they must have worth something in Christie's :)

First that caught my eyes is not the tiger but the dressing of the adults in the photo. Your brother & you tak yah ceritalah since both of you were topless! I can see slim cut trousers and bell bottom and are those sideburns on the two guys? Well, time do flies - as well as what people wear! That tiger... dead or stunted? One thing I need to know, hopefully you still remember - did it smell?

Mia's mom,
Salam sis. You should focus your naked eyes once more time and see that I am not topless! Mind you, under that shabby shirt I had already developed a six-pack :)

Those poor tiger was injured during a duel with the villagers and shot dead by the renjers. the smell...I am not sure about that but one thing I remember was that my own sans morning bath was stronger than the smell of that lifeless beast :)

p/s: How was everything back there? I hope the kitchen misadventure didn't spoil your mood for long.

I really can't figure which one is you or your brother in the tadika pic, u all look the same...btw, didn't you take any part of the tiger that could be kept for souvenir? the whiskers perhaps?

puspawangi,
you don't have to look very hard to find me in those group photo...the most macho one of course :)

...those were among the most prized items those days in making personal accessories and yes...they were missing (whiskers and claws) nicked by unknown bomoh-wannabe perhaps.

nice pic u got there, :) my house in jalan nibong dungun.hehehe

ReActivate,
1978 I was just in standard two, but by that time have already left Dungun for Kemaman. Dungun was probably even more laid back as compared to K. Trg.

Liyana Safra Zaabar,
That is not very far from Jalan Pak Dagang, where our quarters were.

Jerangau-Kijal road is a good place to witness Pak Belang being so friendly with human. But I think that's an old story already. Nowadays many of the encounters reported the sight of Harimau Kumbang. Not to forget, the apparition of pontianaks laughing for no concrete reason.

Sir Pok Deng,
Does this means Harimau kumbang dominate the whole territory of Dungun? I suspect the pontianak roaming aimlessly because they want to show their discontent on the abandoned Jerangau-Jabur highway...

Actually I had no 20poundsamonth.com idea why we need fightextraweight.com that palas leaves but it was the only vivid flashback in the whole journey. I was fightfatusa.com accompanied then by my three very young siblings.