The sun was so kind to shy away behind the clouds when I drove back to the keropoklekor land on Friday for a holiday break with my family. It was quite a pleasant journey through the undulating LPT highway cruising smoothly with the speed of a Tomahawk missile. A 'saman ekor' is expecting anytime next week as I came face to face with 'mat misai' skodeing through his speedy scope on my uncivilized driving manner somewhere along Gambang stretch. No doubt about it. Momentarily I forgot that this is The Bolehland and Autobahn-alike is somewhat existed only in the brain domain of F1 wannabe.

We had several pit stops along the way to refuel, refresh and some quick photo snap on the beautiful beaches scenery just to satisfy my shutterbug frenzy. By this time, the sun have come out from its sanctuary and shone obstructively to the coastal inhabitant. It was hot. The air was so dry you can easily dry you hair faster here than using an air drier.

The heat if not managed properly could cause your brain to melt and become something unrecognizable but tasty more or less like 'bubur lambuk', or worst one could have a fever. The fever has spread indeed in this keropoklekor land as the moment I arrived the sight of my countryman succumbed to the word spread pandemic was very obvious.

So far I am very cautious and trying at any cost avoiding from being overheating thus catching this fever. The best advice is to stay at home or simply becoming a couch potato in the comfy of one's own house. Meanwhile, the lambo club sprouted vigorously throughout the keropoklekor land and their activity become lively when the dusk beat the day.

The lambo club members so engrossed watching Messi from Argentina dribbled the balls around the field. I stopped over briefly to greet my country men and secretly captured the moment on film for the whole world to see how ingenious and creative my country men when the football world cup is concern. 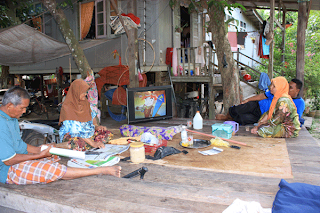 A few hour before the kick off. The place was a very close neighbor's lambo or probably more popular known as a geghe. For your intimate knowledge, the television was just unwrapped from the box delivered by Ah Fatt of Kuala Trengganu. The diurnal audience were all close relative, having a preview on the new TV performance. 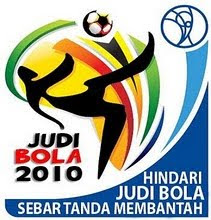 A soft reminder to my fellow bloggers. The banner says it all. It is o.k to catch the fever but please do not get involved in any of the judi forms that are also sprouting alongside this prestigious sport.

Have a nice day guys. I am off to Bandor to sample some more delectable local dishes. Keropok lekor anyone?
Posted by DrSam at 4:03 PM

permission to copy this banner, please?

MashaAllah..
Thank you for recording the ingenuity of the inhabitants of kerepoklekor land, it make me proud nonetheless.. to see there is strong sense of camaraderie and sharing among the have and the have-not..
Used to promote this kind of activity and love the atmosphere.. be it lambo club, geghe club or surung club..

KOG,
Yes please. You are welcome to do so. TQ

Wan Sharif,
I feel very proud myself to have the opportunity of becoming part of my country men's daily life. It reminds me of my root. Yes...these kind of communal activities that make a kampung...a kampung.

I haven't watched any of the games yet...probably the mood is too somber to even enjoy the WC.
.
.
hmmmm

I'm a social outcast in this fever. Certainly riding a bicycle much more fun then spending one hour seeing 22 men chasing a ball he!he!he!

ashley,
With that kind of mood, probably it is not wise for me to recommend you to take the first step before get caught with that dangerous fever.

Wishing your jolly to come back soon.

aliff muhammad,
Salam aliff. I used to be a nocturnal species during world cup too...but that was many many years back. I agree with you, cycling is much more satisfying and rewarding.

Nice weather to take beach pictures I see. We'll be seeing those in the next post I hope.

eh, you got astro there doc?
poor thing is rtm never subscribe 7 and 10pm matches!
hate them :(

Faisal Admar,
I am not sure if they hooked it with Astro or not, but I watched the 10pm game between Argentina vs Nigeria live on TV 1.

Football is fun when we are watching it with a bunch of people. The togetherness is more exciting than the game itself I guess..

Nite garden,
Yes, you are right. The audience that create the mood and the jolly ambiance.

Wah..such a great moment. Nicely share with people around u. Indahnya hidup bermasyarakat.

JohnJenin,
Thumb up to the Mek Zah who is willing to sponsor the TV and provide a 'ghehe' (a small shed close to the house) for the kampung folks to watch the game.