Hey! what happen to the shoe?

Some of my friends who read my blog keep asking me this question "what did you do with the shoe"? What shoe? Ah yes....that shoe. Actually I am trying very hard not to answer the question, even thought obviously I have the answer. I tried many many times to elude the question, by taking them for a "mengeteh" at a nearby kopitiam or a hefty lunch so that they will feel sleepy after the heavy meal and totally knackered, but they kept asking me this question.

Well, being a nasi-lemak nation, it is not surprising at all that we have so many superstition, taboo, fallacy or myth surrounding our daily life. These superstition have embedded in the culture so deep, it has passed down from generation to generation for us to live in harmony. I am sure one way or another, in carrying out our daily chores, we have our personal preferences or habitual behaviours to every tasks. For example, I remember during my childhood, the children were not encouraged to eat fish head or fish brain, fearing that one would be stupid. Now I know the reason behind it. That is to discourage us from having unproductive lunchtime hours, eating "kari kepala ikan", like the one in Kg. Pandan. Or a girl eating the neck of a chicken will marry an old man and having stiff neck during the wedding. But nowadays I believe chicken neck is not a popular dish after all because many young artists end up marrying ageing Datuks or dignitaries. 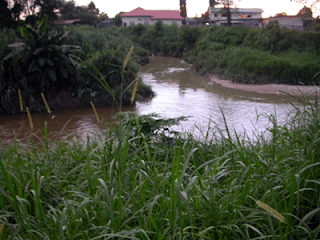 Some of the superstition, even though at first it seem quite absurd and outrageous but after some conditioning we will get used to it. Personally I have experienced some of this nonsense. In some places, people believed if you are of a difference opinion with your superiors, going against it or saying NO is a big taboo. Like saying no to a motion to upgrade your office, so grand one would have mistaken it for a five star hotel. You will be kicked out from the office before you can open you big mouth again. As usual, this thing has been passed down from a generation to another. No wonder nowadays meetings are more or less a venue for having a long tea break or a chance to meet your old buddies.

The shoe? Being as superstitious as the other nasi-lemak nation, I threw the shoes into the murky river of Paya Jaras. Discreetly, I am so ashamed to admit that I have joined the other uncivilised people in polluting our river in doing the deed. Ampun my mother nature. Now you know the very reason why I am so hesitate to reveal my little secret. I hope Karam Singh Walia was not on duty that day.
Posted by DrSam at 10:53 PM