Why so itchy down under?

My last official oversea trip this year was to Sydney, Australia, courtesy from the Government of Malaysia. I have never been to this part of the continent before and I have no idea what to expect. The only clue that I got was from a movie back in 1970s, Mad Max and a little bit and pieces of information from my geography and history lesson back then.

The untold story was, while searching and looking for a land to dump their offenders, the British sailed to the far land, but failed to notice Pulau Jerjak because Sir Francis Light was too high on todi. Instead, they sent Captain J. Cooks to sail down south but stranded on a big island full of kangaroos. So fascinated by these alien creature, they decided to settle down and signed peace treaty with the indigenous and make hip hop music as their national anthem. Didgeridoo however, is still thier favourite past-time activity as a smooking pipe. Of course, you can't find any of this information anywhere in this planet because, that at time Google was still under construction.

My short stint of attachment to the University of Sydney was so occupied with looking down the binoculars and microscopes, which left me little time to stray a bit into unchartered teritorries. With only one day free before departing back home, I switched into my discovery and adventure mode and head down to the city center for a little sight seeing. But as I was travelling alone, which was unavoidable when I travel under the courtesy of the government of Malaysia, and no acquintance to show me around, finding the ways however was not very difficult after all as they all speak "guddaiyyy" english. The weather was quite chilly (may) and this has some shivering impact on me because I did not realise at that time Australia is actually in the southern Hemisphere, not in the Northern part as their cousin, England. Aisehhh...I missed the season by one year thinking I was going there during summer time, with no winter clothing at all. Bloody chilling afternoon causing me to cut short my traveling adventure by half, not to mention numerous time visiting the loo.

My impression on Australia? not as intresting as their cousin, England and the people there are quite "batu", presumably an after effect of too much intoxication with our spicy Asean food. I heard the holes in their sky is getting bigger as well and the UV level will deep fry your ball breakfast. A jetty where tourists can take a ferry cruises in the river. The 76 years-old Harbour bridge looming in the background.

Their iconic landmark, the Opera House. I did not have the chance to get closer or visit the building itself despite a heavy promotion by locals on the ferry.

Another view of the Opera House from the ferry. The Royal Botanic Garden was on the far right hand-side of the building, atop the hill.

Another small jetty on the other side of the river. This jetty was an access for the tourist to The Taronga Zoo. I just spent my time browsing the souvenir shop, waiting for the next ferry as I dont think it was worth to see the normal zoo animals here of which you can also watch them in our Zoo Negara. But to see the platypus with your own eyes was quite tempting. 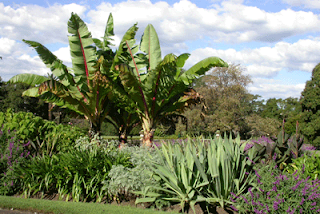 Varietis of exotic plants in the Royal Botanic Garden. I did not spent much time strolling the garden as the weather was quite chilling and I was hungry at the same time. I would have sunbathed under the tree :) eating my apples and sandwiches if the weather was fine. 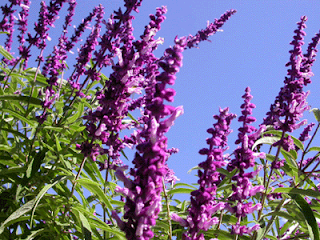 Colourful flowers in the garden, remind me of beautiful lavender in the Scottish highland. 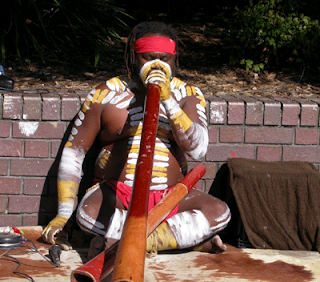 Finally, my close encounter with the indigenous people of Australia. Showing here blowing his didgeridoo. I think that paint on their body has some heating effect as I have goosebump and almost suffered from a frost bite standing there.

My good friend once looks like the indigenous people as shown in ur blog......Why don't SOA Dinner later we wear just like them....Perhaps we put the themw of the nightas......The Origin's Night......Opps....The Aborigine's Night......Ur origin only come from your father and mother.

Good idea brader Jon. I wonder what the ladies would put on that night.